Explore Support Pages
Our car seemed to be the only one for miles as it traveled along black tar, cutting through snow-coated landscapes of Sweden's Arctic tundra, leaving pine trees behind as the scenery turned into vast wilderness. 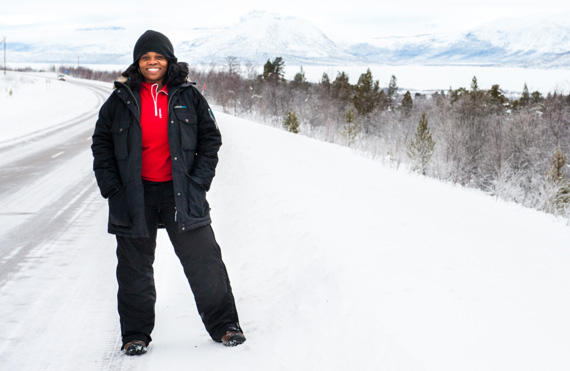 The winding road towards Sweden's northernmost town of Abisko—population roughly 110—took us past frozen Lake Torneträsk to our right, the sun hovering at its horizon but never truly rising. At this latitude, we were traveling with less than two hours of daylight the entire day. We were heading this far north because the region has been scientifically proven to be an ideal viewing spot for the elusive Aurora Borealis—perhaps better known as the Northern Lights—in all of Swedish Lapland. This was my mission. The Northern Lights are high on many travelers' bucket lists, including mine. Beyond the deep-seated anticipation I was feeling, I didn't know what to expect besides trusting friends who had already witnessed them swirl over their heads. "You truly can't describe the feeling of seeing these natural phenomena," they told me. "You just have to see them." Lake Torneträsk is 43 miles long, lies in Abisko National Park, and helps create the "blue hole of Abisko," a patch of sky that remains clear regardless of the surrounding weather patterns, fostering its own unique micro-climate. Expecting a full-fledged town, I arrived into a tiny village at the foothills of Mount Nuolja, 900 meters above sea level. Atop its slopes perched the remote Aurora Sky Station. During the day, it was a haven for skiers who rode up its chairlift to start their runs. At night, it became home to light chasers scanning the sky for those elusive Aurora Borealis. 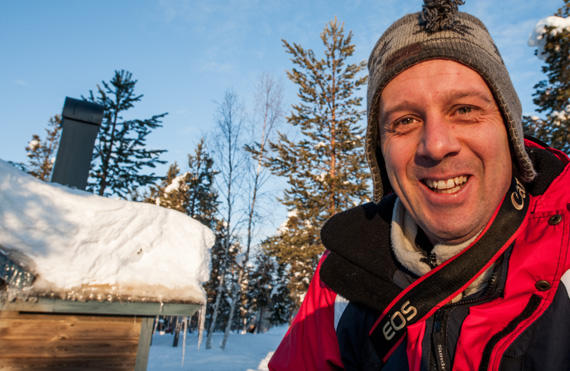 I was traveling with Peter, a local guide and professional aurora chaser, and he knew just where to take me, someplace where we'd have a piece of mountain and sky all to ourselves. People normally don't go up mountains at night. Ascending up a mountain via a chair lift into darkness rouses a certain feeling of unease. One mixed with anticipation as well as a fear of the unknown. We hiked farther out from the station to a spot behind one of Mount Nuolja's slopes where cell phones were useless. My heart beat faster in anticipation, not knowing what to fully expect atop the mountain that dark winter night. The moon lit up surrounding mountains, and they all looked like peaceful resting giants. We stopped amidst sheer silence. And then, the lights appeared. As they twirled all around and above us in every direction, I spun 360 degrees to soak it all in, not knowing which direction to turn first, and trying to capture it all with my wide-angle lens.

But taking photos seemed futile, and I had to stop. I was overpowered. I had seen them before, the green swirling lights of the Aurora Borealis as they once danced across Iceland's UNESCO-protected Thingvellir National Park, just outside of Reykjavík during the dark throes of winter. I was with a large group then, but the moment had been lost in a series of loud chatter and clicking cameras, with flashes obscuring what we were there to witness. This time, as the clock inched toward midnight, we were the only souls on top of Mount Nuolja. The absolute silence struck me. The vastness of it all and an eerie isolation, even though I wasn't completely alone. Sparkling lights from the tiny village of Abisko and icy shimmers from frozen Lake Torneträsk spread out in the valley below us. There was nothing between us and the sky, just the lights that whirled, danced, and unfolded like curtains in ribbons of red and green above us. 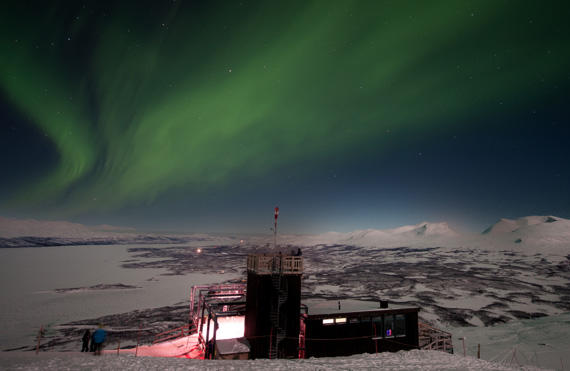 There's something about watching the Northern Lights dance overhead that forced me to stop. I ignored my camera and tripod. I put my smartphone away and just watched, totally engrossed. My initial fear of ascending into the unknown was replaced with utter reverence and an inner gratitude to be witnessing nature's own exclusive light show between the cusp of mountain and sky where only a few ventured. I was in awe, entranced, and fully in the moment. Acutely aware of my breathing and pounding heart, I realized just how small I was in life's grand scheme as auroras gyrated across the sky, and I shut off my camera.