Ascending to the Roof of Africa

“Oh, it's hard," she said, gasping for breath. Funny, I thought. I'd been told that this was the easiest way to trek up and down the world's highest free-standing mountain; this exhausted-looking woman was my first glimpse into the reality of what I'd talked myself into. Soon enough, I'd find out for myself just how tough the five-day trek would be—up and down Mount Kilimanjaro, the “Roof of Africa." 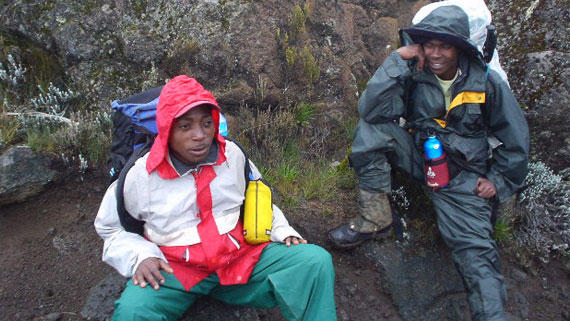 Known locally as “Kili," the tallest mountain on the continent (19,338 ft.) draws avid trekkers and bucket-listers (like myself) from around the world up its slopes on any one of seven different routes. For those with little-to-no mountaineering experience, the most popular approach is the Marangu Route from the southeast. Tour guide operators bill it as the easiest because there are shelter huts along the way, eliminating the need to carry camping gear. To be fair, the initial leg of the trip—a few hours through Kili's base of lush rainforest, to the first base camp, the Mandara Huts at 9,000 ft.—wasn't so tough. At my side was Jimmy, a local guide from Tin Tin Tours in the nearby base town of Arusha, who would continually up the interesting factor throughout my trip. He taught me some useful phrases in his native Swahili, like “Mambo" (“What's up?") and “Poa" (“I'm cool"). Also heard on the trail: “Hakuna matata" (“No worries") and Pole pole (pronounced “poleh poleh"), which literally means “slow slow," but it is also used to mean “take it easy," “slow down," or “relax." “Mount Kilimanjaro is all pole pole," Jimmy told me as we kept a steady, comfortable pace. We trekked through a variety of ecosystems as we ascended up the Marangu Route, from heathland to mountain forest to moorland. Mid-May is rainy season for Kili, and on the second day of our trek, the shrubbery and trees were shrouded in a thick, eerie mist, 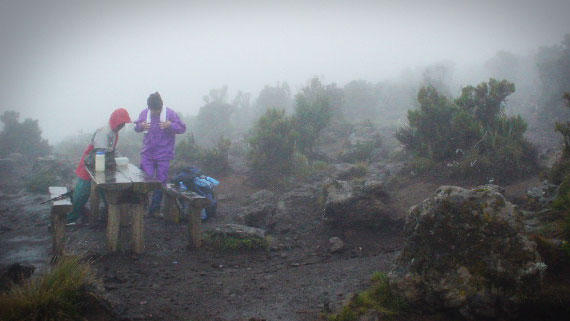 as a drizzle came from above. But with rain gear on, I was more concerned with the progressively thinning oxygen as we continued up the mountain. We were already above the 10,000 ft. elevation mark by this point. “How was it?" I asked an American couple on their way down the mountain. “We didn't make it," the woman said. “I thought this was supposed to be the easy way!" In fact, not one member of their five-person party made it to the summit, some submitting to altitude sickness by day two. I eyed the rest of the trail nervously. I suddenly felt a mild headache coming on.

I eyed the rest of the trail nervously. I suddenly felt a mild headache coming on."

Fortunately, Jimmy and I soon arrived at the second base camp, the Horombo Huts at 12,340 ft., where I could rest and acclimate to the new elevation. As we settled in, I observed another team on their way down—this one carrying a trekker wrapped up in a stretcher, with the sides of his head blue from the lack of oxygen to his brain. Things were getting serious on this supposedly easy Marangu Route. I'd later find out that Marangu has a rather low success rate because its ascent is faster than the others. Nevertheless, the following morning, with new red blood cells in my body after a night's rest, I was feeling a bit better. “You don't have a headache?" I asked Kenzo, a Japanese trekker I'd met who was also trying to get to the top of Kili, with his Tanzanian guide, Festo. 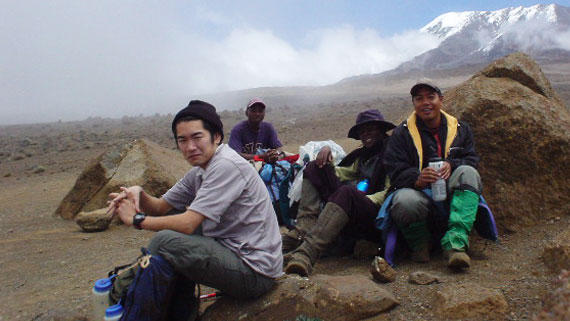 “A little," he answered nervously. "You?" “Nope." The previous night's discouragement lifted away with the clouds; it was shaping up to be a clear day of blue skies, and Kili's coveted summit was in sight. “Twende," my guide Jimmy said in Swahili, smiling. “Let's go." We departed the second base camp together, along with Kenzo and Festo. We began our third leg of the trek through a moorland of shrubs, as Mawenzi, Kili's second highest peak, came into sight. My eyes were excited to see these prized crests — they jutted up from the shingles of this "Roof of Africa"— however my lungs didn't share the ocular enthusiasm. In the thinning air, my bronchial tubes felt like Krazy Straws; I had to concentrate on every breath, inhaling extra deeply in order for any air to reach my lungs. Above 14,000 ft., we were literally in the clouds, and the sunny blue skies transitioned to rain and back again within a few minutes. The temperature varied with the precipitation change, and I often found myself adding and removing layers in order to keep my body temperature consistent. At least I managed to stave off any altitude headaches. Kenzo, however, was not so fortunate; by lunch he'd developed a throbbing pain in his head. His agony was enough to make me take precaution—taking advantage of our break to rest and drink plenty of water. Despite Kenzo's pain, we were both feeling fairly confident in ourselves and our endurance levels—at least for the moment. As we trekked on, the path undulated as the environment began to resemble desert.

“Hakuna matata," Jimmy said, giving me a hard candy to suck on in the drier conditions. “Asante," I answered, trying to keep my spirits up. But I started to feel lightheaded as we arrived at our third base camp, the Kibo Hut at 15,520 ft. It was there that we rested before commencing the final leg, through the darkness, in hopes of reaching the top at sunrise. But rest time wasn't so restful; my headache was worse and I became very nauseous. “Do I have to eat?" I asked Festo and Jimmy. “Yes, you lose your appetite above four thousand [meters], but you have to force some food down," Festo advised. “It's normal to feel like vomiting. Up here, there is only half the oxygen. But once you vomit, you will feel like you have new energy." Festo was proven right moments after I ate some soup—it came back up almost immediately. The headache evaporated, and I was a new man. 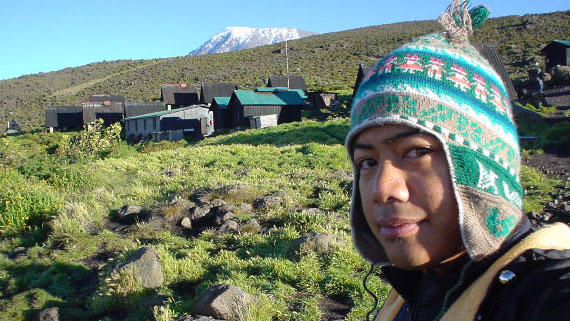 After a few hours of sleep, we headed back on the trail around midnight for our epic ascent to the top of the mountain—a dormant volcano, technically. Although the moon wasn't quite full, it was still bright enough to illuminate our journey rendering flashlights unnecessary. What was necessary was warm clothing; at gusty sub-zero temperatures, I prepared myself with multiple layers. Walking generated some body heat, but some sections were so steep that cold prevailed. We climbed switchbacks covered in loose rocks, wasting energy as we tried to keep from slipping. “Pole pole," I told my guide, struggling. Trekking at lower altitudes was one challenge, but I was used to that. This was on an entirely different level—literally—and I suddenly began to feel very unprepared. Our pace of ascent began to slow significantly. Kenzo appeared to be in excruciating pain. I had to concentrate on every single breath just to force a little bit of oxygen into my lungs. By the break of dawn, we were only about two-thirds up to the rim of the volcanic crater, but we trekked on, determined. When we crossed 16,000 ft., we began seeing the snows of Kilimanjaro made popular by Ernest Hemingway. Again, my eyes were more excited than my lungs. Breathing became even tougher with the freezing temperatures—my nostrils were covered in frost—as did hydration; my water bottle purification filter froze shut. Luckily, Kenzo had some water to spare, and together, the two of us battled up our worthy opponent. It was about eight in the morning when we finally made it to the top of the crater ridge at Gilman's Point, 18,633 ft. The mighty Kilimanjaro was beneath our feet. It had only taken three days to get there, even though it felt like weeks. Looking down at the mountain from that altitude, being so high that I could actually see the curvature of the earth, was truly awe-inspiring. All of our efforts were well worth it. Finally, my lungs, along with the rest of my body, caught up with my eyes' excitement. “Congratulations!" Festo announced. “You made it!" Kili's highest point, Uhuru Peak (19,338 ft.) ran along the crater rim, only a 700 ft. difference in elevation change from our location, but laterally it was hours away, and our window of time to get there had closed. The top of the Mount Kilimanjaro at Gilman's Point would have to be it, and that was fine by us—or rather me. Kenzo, for his part, had really begun to lose it. His legs soon lost the ability to carry his own weight. We had to get to a lower elevation pronto. 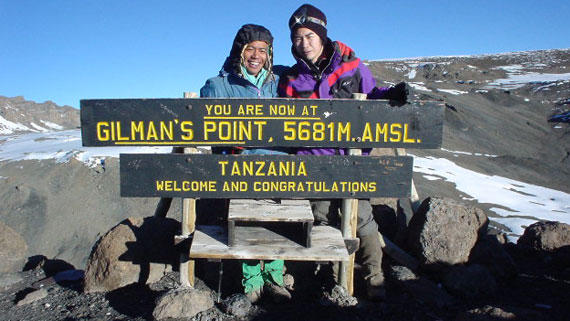 His guide held him up by his shoulders, as we slowly made our way back down the trail. “You still get a certificate," he told me — not that it mattered much to me because being up high enough to realize your position on the planet was a much more ethereal feeling than any piece of paper could deliver. It took two days to come back down the mountain. It was less of a struggle as the oxygen became more plentiful at the lower altitudes. It did Kenzo some good, too; he eventually got his coordination back and was able to make it down safely—without a stretcher. At the end, I stood at the base of Kilimanjaro, grateful for the fact that, while I may have not “conquered Kili" by making it to its highest peak, I had at the very least not let it conquer me. Pole pole, indeed.