Adaptive sports programs empower athletes of all ability levels to get out and explore without limitation. Get a closer look at their lives on the slope, through Nick Davidson's experience, as a volunteer with the New Mexico Adaptive Sports Program.

A sunny winter morning 10,000 feet up in the New Mexico Sangre de Cristos seems to be stolen from spring. My view from the crest is arresting: a tumble of stony peaks and pine-green slopes under a cerulean dome. Beyond the Sangre foothills where the Rockies terminate, lies the high desert and, farther still, the white-glazed Jemez range. On a lazy Tuesday like this one, I just about have the place to myself. I'm a few weeks deep in my first season as a volunteer ski instructor for Adaptive Sports Program New Mexico (ASP) at Ski Santa Fe, a program that gets physically and mentally disabled athletes outside to play in the mountains. 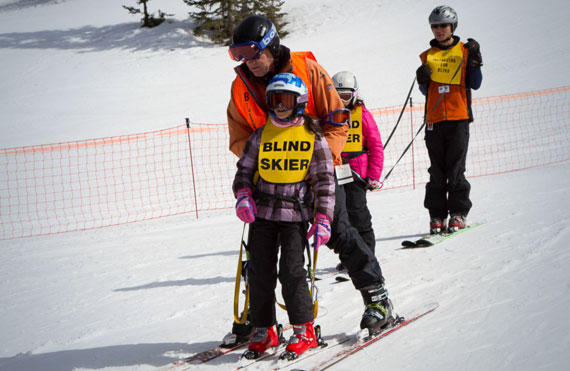 Fellow instructor Gerd Nunner (who holds the unofficial record for the most rim-to-rim-to-rim Grand Canyon crossings at more than 80 to date) has led our student Manny down the last few runs while I filmed with my GoPro. Now, I take the reins. I bind Manny's ski tips, clip the tethers in, and with a gentle nudge, we take off. Manny, a remarkable teenager with autism, is a natural on the snow. He's been riding Easy Street with me and Nunner all day and gets better every run. Doesn't talk much, but he's a singer. As we gain speed and carve little turns “Left, Manny!" he chirrups or wheels into a Robert Plant falsetto, hands dancing “Nice air guitar, Manny!" His demeanor is enviable, lost in the moment and yet uniquely attuned to his surroundings and to us, his instructors. I call out, “Hands on your knees, Manny!" and he drops into a shallow tuck as we track onto the flats toward the chair, where a few of Manny's teachers and friends cheer him on, for one more run. When we're done, Nunner and I give Manny high-fives. He's all smiles. Maybe it's the mountain-fresh air, the casual bunny hill glides, or the unshakable gaiety of the kids we're working with, but I feel good. The vibes are infectious.

ASP is one of more than 100 programs all over the country that cater to adaptive athletes like Manny, or like Andrew Chavez, an Iraq War veteran whose injuries nearly killed him ten years ago. 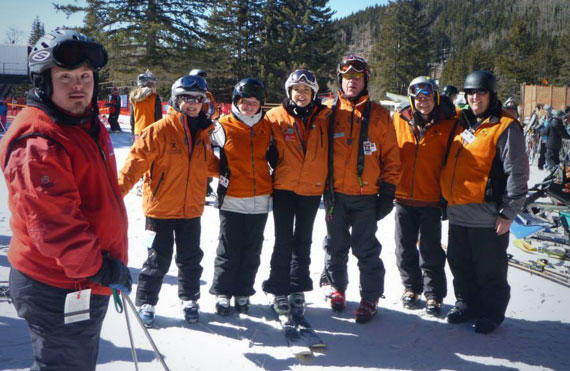 Andy, 35, who led nighttime special ops missions in Iraq, likely caught a deadly bacterial infection when an RPG crashed on top of him and knocked him out in a firefight. Months later, on holiday skiing in the Alps with his wife and friends, it caught up with him. Much of his brain and several internal organs had necrotized. He was clinically dead for 18 minutes before doctors revived him, but he lapsed into a coma, brain-dead. His family had just signed papers to let him go when he miraculously woke up, short-term memory gone along with any hope of walking. But, several years later, I'm skiing with Andy in his hometown, where, through an indomitable will and therapeutic sports programs like ASP, he's making tracks under his own power and the help of two outrigger poles to steady himself. His longtime ski instructors Noel Camborde and Frank Pehr tell me he has a penchant for speed but rarely crashes. I can see his superhuman focus and firm but cautious stance as he rips down Easy Street. For a man who doctors thought would never walk again, his skills and confidence are impressive. When Andy's dad tells him he'll be an expert one day, he just smiles and quips, “I already am." The same day I ski with Andy, I meet Mario Chavez (no relation to Andrew) taking lunch in the La Casa Lodge cafeteria. His bi-ski has just caught an edge and flipped, raising a bloody contusion on his cheek, but he's hardly fazed.

I would rather be up here getting these scratches on my face than at home watching TV. To be out here, just being alive. I get a little emotional."

“I'm asking for all of it," Mario says. “But the best thing is I was able to get back up." Getting back up is Mario's specialty. He was active in his youth: he rode motorcycles, skied, built hot rods and raced them and was a fast runner. But at 21, he started falling a lot, and doctors diagnosed him with facioscapulohumeral muscular dystrophy, a progressive disease in which skeletal muscles inexorably degenerate and die. After the diagnosis, he spiraled into a dark depression. ASP has helped relight his fire. Now 42, he's his old self again. “I sometimes forget I'm handicapped," he tells me between bites of his sandwich. “Until I stand up. And I become humble again." He doesn't let it bring him down, not anymore. “I'd rather be up here getting these scratches on my face than at home watching TV." His voice grows huskier. “To be out here, just being alive. I get a little emotional."

Metamorphosis on the Slopes

Longtime instructors like Harry Porter, who has volunteered with the program for 10 years and is now the head clinician for blind and hearing-impaired skiers, witness these metamorphoses year after year.

“People have this idea that only athletes can do athletic things," says Porter, whose son, Christian, has been an ASP student for 11 years and is now an assistant instructor himself. “But then there's this startling revelation in their lives that they don't have to be stuck in a wheelchair. You get them on the mountain and they just open up. I love that." On the final Tuesday session of ASP's 2014 season, director Brett Maul guides Ro, a student with cerebral palsy, down the mountain in a bi-ski. It's Ro's last run, and though the sky looks hazy and muffled with flat gray clouds that blur the distant Jemez peaks, the day is warm, the snow packed and crunchy. Ro's default expression is a toothy smile, and when we near the drop down a black run called Muerte, Maul spins him in a full circle just to widen it. I'm on film duty and trail behind them as they drop in. 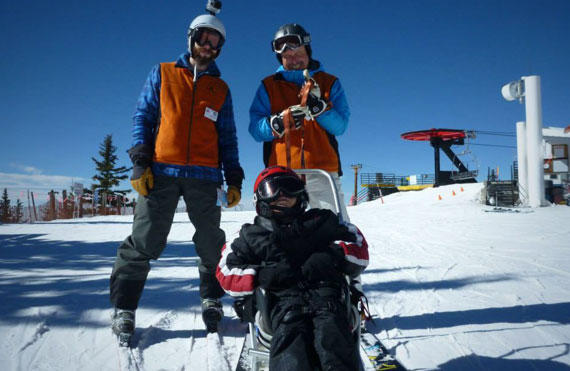 Maul, 49, has taught adaptive snow sports for most of his adult life. “It makes me happy to see other people succeed," he says. “For most here, it's not about an outcome, it's about a continuous journey of self-improvement." We gather speed on the steep pitch and Maul weaves Ro in and out of the lengthening shadows, driving the bi-ski like he's strolling behind a shopping cart. Ro is relishing his final plummet before Maul accelerates him into a tree-ribbed corridor at the bottom of Muerte. They drift to a stop at the gear shed, and I say goodbye to the gleaming skier. To finish the season on Easy Street, or Muerte, green or black is irrelevant. At programs like ASP, even physical gains are superfluous. What's essential is that students like Manny, Andrew, Mario, and Ro get a chance to test themselves, to take to the mountains with a pure heart in the face of limitations and prove them false. To exhilarate in the alpine freedom, revel in the mountain-fresh air, laugh in joy. And finally to beat the odds, forget they exist, and in doing so, discover they never did.