Nick Davidson and his girlfriend Paige were ready for a real Alaskan adventure in Denali backcountry. The one thing they hadn't counted on, however, was a few too-close-for-comfort brushes with the inhabitant grizzlies. Experience their adventure.

The bus dropped us at the Toklat River contact station, a waypoint some 50 miles down the Denali Park Road. Lofty peaks loomed all around us, draped in stunted greenery that from a distance looked like moss. Dall sheep specked the ridges white, and the Toklat River wound up the trackless valley to the glacier's tongue, hung on a high peak. That humbling view held a single fact: our safety was relative and in no hands but our own. 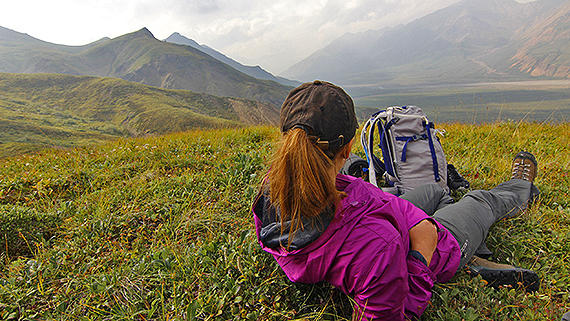 Our plan was straightforward: over three days, my girlfriend Paige and I would hike up the eastern fork of the Toklat River, scramble over the ridge and down to the adjacent valley, then make our way back down the river's west fork. No trail, just a map and a dizzying sense of freedom. We'd recently learned that this area was home to a high concentration of grizzlies, and that worried us a little. One had killed a person somewhere in the park, but only one, and it was a vast place. Still, as we crossed the cold braids of the river and trudged upstream, we sang and whistled and yelled to alert its denizens of our presence. We saw only caribou. Later in camp, while Paige and I nestled into grass along the gravel bar and read, two cream-colored grizzlies meandered in the hills above us. We watched, wary, but they disappeared over the ridge and left us more awed than worried. 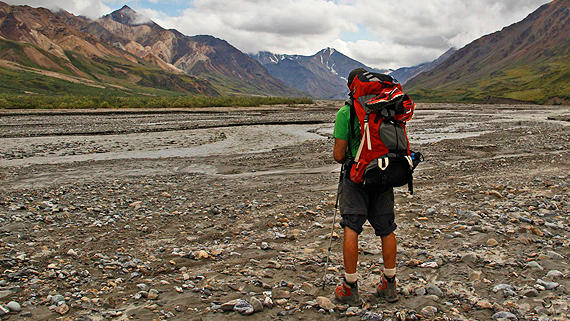 After dinner, we walked about a hundred yards from our tent and stashed a bear canister full of food. I looked up and saw the same  two grizzlies running back down the ridge, much closer now. Paige nudged me and pointed to a pair of caribou running our way. Bears and caribou were converging on us, unaware of our presence—a Discovery Channel moment in which we'd been caught up in the animal drama. I didn't like where this was going. We did the only thing we could do: waved our arms and hollered, hoping the grizzlies would retreat. The bears stood on their hind legs and looked at us, sniffing. For one long moment, we had no inkling whether they'd leave or come after us instead of the caribou. Paige gripped my arm, and we hollered again. The grizzlies turned around and loped over the ridge. We'd be headed that way the next day. Much later, we learned this was the very spot a man had been killed by a rogue bear the year before. 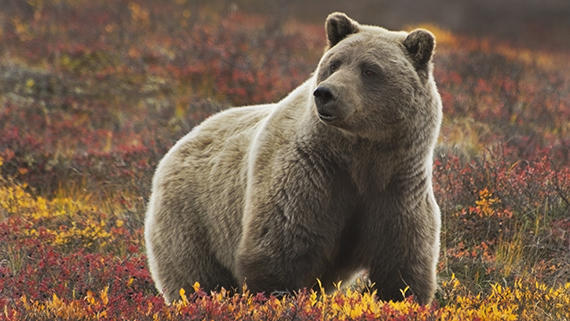 I didn't like where this was going. We did the only thing we could do: waved our arms and hollered, hoping the grizzlies would retreat."

In the morning, we found fresh grizzly tracks near our tent, though we hadn't heard anything in sleep, perhaps a narrow miss. Once packed, we found a low saddle between peaks and climbed the hills to cross there. The terrain determined our best route, and we navigated an undulating maze of lichen, berry patches, rock and tarn. The brush was often taller than your average bear, the thickets of trees dense and almost impenetrable. We yelled constantly and wondered if we'd ever find a way down to the river far below. When we did reach the gravel flats, we almost ran into a grazing moose. He lifted his head, then gracefully ignored us. The river was raging after the day's melt—deep, cold, and fast. Paige wanted to cross anyway. Her determination scared me because the river scared me. I convinced her to wait until morning when the glacier would have had time to freeze again and slow the current.

As we hiked, it occurred to me that it was likely no one had ever taken these precise footsteps in all of human history, nor would any follow. We felt like pioneers, and whether or not that was true, we knew it was true for us then. We had only our instincts to read the land, avoid trouble, find our way. In those moments, in that place, we were the only humans, and perhaps the only ones those bears and caribou had seen or would. When the morning came, our last, I didn't want to leave. This pathless country had centered me. Such places tune you to the land and to your self. Priorities tilt toward the elemental, and wonder abounds. The wild mountains, the cold and silty rivers, the clouds billowing over ridge tops, the caribou, sheep and grizzlies racing across the speckled landscape—like all its kindred, Denali's backcountry is a place to be more human.