Explore Support Pages
For those of us who snowboard, we know that trying to find the right pair of men’s or women’s snowboard boots is not like trying on a new pair of shoes.

It takes a lot of commitment and trial before you feel like you’ve picked the right pair of boots. Having the right boot may be the difference between a smooth session on the slopes and a broken ankle, and ain’t nobody got time for that. Whether you’re about to buy your first pair of boots or you’re a veteran who may need some brushing up on the new technologies provided in snowboard boots today, we’re here to talk about the three Fs of snowboard boots: features, fit, and flex. Features Features matter when it comes to snowboard boots, but which features are need-to-have and which are only nice-to-have? Need-to-haves Liners: Liners fall into three basic groups: non-moldable, thermoformable, and custom moldable.

At the end of the day, if you see phrases like “heat retention”, “anti-stank technology”, or “heel harness” (think tech that will keep your heel locked down when you’re riding), you’re on the right track. Lacing: They say the best things come in three, so it’s only natural that snowboard boots would come with, not one, but three lacing systems. Burton Fiend Snowboard Boot 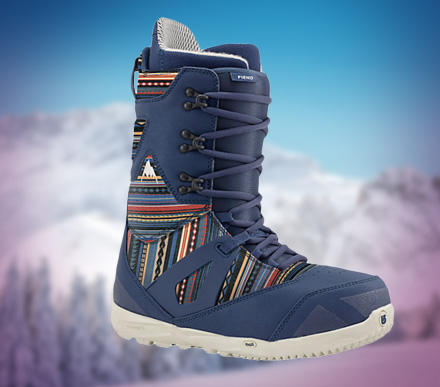 Traditional lacing is the tried-and-true option that’s mostly biffproof. With a traditional lace, you can easily adjust the fit like you’re tying a shoe. They’re relatively inexpensive, and once a lace is worn out it’s easy to replace as long as you’re carrying replacement laces. The drawback, however, is that if you’re wearing gloves or your bare hands are stiff and cold, they can be difficult to tie. And while you’re riding, laces are known to come loose. Burton SLX Snowboard Boot 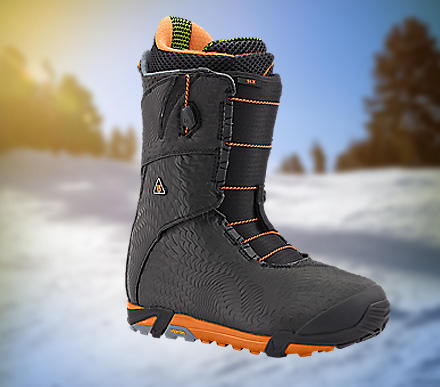 Quick-pull laces are the fastest and most convenient option, but they can take some getting used to. The good news is that you can fasten them while wearing gloves, and they’re designed to have a customizable fit. But like traditional laces, they can come loose. But the biggest drawback is that a worn out or broken lace could end a fun day on the slopes prematurely and that’s no bueno. Unlike a traditional system, once you have a broken a quick-pull system lace, it will take the right supplies and a good 30 minutes before your boots are ready for the slopes again. Some riders also find that they can’t exert enough force to tighten the laces as snug as they might like. The most expensive option is the boa system. Burton Concord Boa® Snowboard Boot 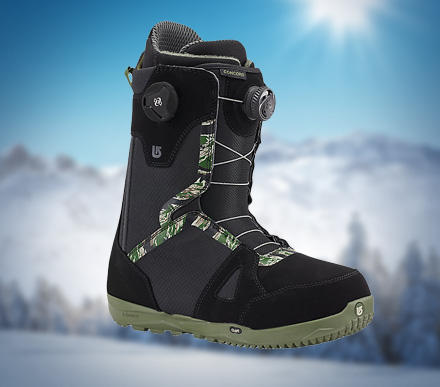 It’s a snug fit lacing system aptly named after the boa constrictor and it’s a fast and easy option that can be easily modified with just one hand. Because it’s a one-dial system you can only adjust the fit for your whole foot, which is unlike the traditional and quick-pull laces that give you the freedom to tighten individual points on your foot. The areas where the laces connect to your boot create pressure points and, just like the quick-pull option, you run the risk of having to leave the slopes if a strand ends up breaking. Nice-to-haves Cushioning: If you want to feel like an astronaut wearing moon boots and also have better shock absorption, it may be worth paying more for cushioning and padding for the tops of your feet, ankles, and heels. If you’re an air-bound powder hound, this one is non-negotiable, as you’ll want all the support you can get after landing that big jump instead of it all going to your knees. They will thank you later. Durable soles: Do you plan on walking around the resort a lot and want a sole that’ll keep your feet from aching? Then we adding this amenity to your boot hunt, especially if you have flat feet or nerve damage. But if you plan on having a minimal amount of trekking around and don’t fall into the above category with your feet, then this isn’t a necessary feature. Fit The boot should fit snug on your foot, but not to the point where it starts to feel like your circulation has been cut off. Your toe should brush, not be squashed by, the front of your boot when standing (and make sure that your heels stay in place while leaning forward). Remember that you want your board to lift when leaning forward, not your heels. It’s also important to note that sizes aren’t consistent between brands, so there’s a good chance that Burton boots won’t necessarily fit the same way that K2 boots fit. Flex In the same way that boots come in different shapes and sizes, they also come in different forms of flex. It wasn’t that long ago that snowboard boots only came in one condition: hard. Now we have the option to choose the exact stiffness we want in our boots. The softer, more malleable boot is best suited for beginners and riders that plan on using the whole mountain (parks included), as you’re given more freedom and mobility in your boot, making falling and pulling off tricks easier. Hard boots are meant for high-speed situations and offer firmer support, so when the speeds get high your feet will stand firm on your board and you won’t feel like you’re slipping. It’s more about how you prefer to ride than it is about how one is better than the other. Now that you understand the features available, how you want your boot to fit, and the type of flex that best suits your style of riding, it’s time to shop! We’ve shared some of our favorite boots based on use below, but don’t be afraid to try on as many as you need to before deciding on “the one”. All-mountain Boots Men: Burton Moto Snowboard Boots Burton Ion Leather Snowboard Boots Burton Rampant Snowboard Boots Women: Burton Mint Snowboard Boots Vans Aura Boa Snowboard Boots K2 Haven Boa Snowboard Boots Freeride Boots Men: Vans Hi-Standard Snowboard Boots Burton Driver X Snowboard Boots K2 T1 Boa Snowboard Boots Women: K2 Snowboards Contour Boa Snowboard Boots Burton Limelight Boa Snowboard Boots ThirtyTwo TM-Two Snowboard Boots Park and Freestyle Boots Men: K2 Darko Boa Snowboard Boots Vans Hi-Standard Snowboard Boots Burton Rampant Snowboard Boots Women: Burton Ritual Snowboard Boots Vans Hi-Standard Snowboard Boots Burton Sapphire Snowboard Boots