How to Use a Compass (And Why You Should Learn!) 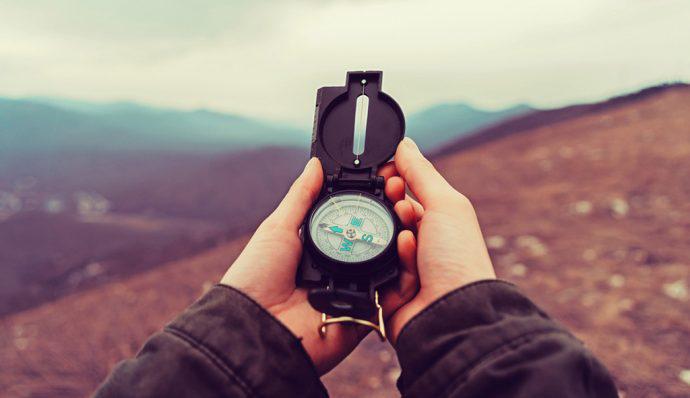 Learning how to use a compass can seem needless in our age of technology. After all, we have GPS devices that can do the same work with less effort. Nevertheless, knowing how to use a compass is crucial when you’re planning a hike. A hiking GPS could run out of batteries. If you happen to drop it, it’s pretty easy to break, and a poor signal can render it useless. Without a backup plan, it’s easy to get lost in the woods and hard to get out. Part of this is physical. You have a dominant leg in the same way you have a dominant hand — in fact, they’re on the same side. This becomes problematic when you’re lost in the woods. Your dominant leg generally has a longer stride than the other, which often leads to walking in circles. Disorientation is also a problem. When you’ve been off-trail for a while, you’re bound to get scared and stop thinking logically. It becomes much harder to distinguish between new landmarks and ones you’ve already seen. The longer you’re lost, the more confused you get, and the more likely you are to make poor decisions that can lead to disaster. But by learning to use a compass, you guard against these dangers. You have reliable, effective tools at hand to make sure you can always find your way. Table of Contents

The anatomy of a compass

In order to know how to use a compass, first you need to understand is each of its parts:

Whether you’ll be using a compass with a map or on its own, there are a few terms you’ll need to understand first. For instance, there are three ‘north’s when it comes to compasses and maps. ‘True north’ relates to where the physical north pole is and it’s actually not relevant when it comes to navigation. ‘Grid north’ refers to the top of your map, but instead of being a single point, it’s a line; it’s as if the world is flat and the entire top of the map counts as north. The last ‘north’ is ‘magnetic north,’ which is where the compass needle points. It’s controlled by the earth’s magnetic field. You also should know the basics of magnetic declination, or just ‘declination.’ This refers to the number of degrees between true north and magnetic north and whether they’re to the east or west of true north. If magnetic north is east of true north, the declination is positive, and if it’s west, the declination is negative. For example, the declination in Boston, MA (where I’m writing) is -14 degrees, since it’s 14 degrees west of true north. Declination changes over time because of normal magnetic activity, so make sure that if you’re using a map, it’s as current as possible to reflect the most recent declination readings. Speaking of maps, there are some words to learn — or review — if you want to use one with a compass:

How to use a compass

Now that you know the vocabulary, it’s time to put your skills to use:

How to use a compass with a map 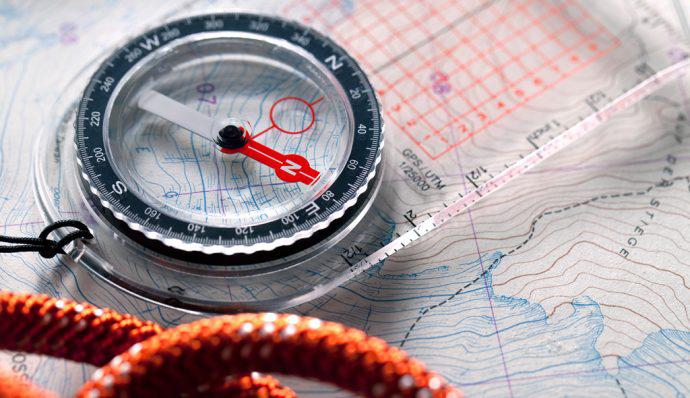 Sometimes, despite the best-laid plans, you’re going to run into obstacles. A downed tree, a swampy area, or a large patch of ice could be a deal-breaker on your course — unless you know how to use a compass to go around. No need to panic, though. It’s actually a simple process:

This is the power of learning to use a compass. It can help you stay on course, circumvent things obstructing your path, or even save your life. Now go out there and get one for yourself. Not sure how to pick one? We have tips for choosing a compass too! Practice in a place you know well until you’re comfortable, then enjoy the great outdoors knowing that you’ve got back-up if you need it.