Explore Support Pages
Follow a daring group of friends into the snow-caked backcountry of beautiful Colorado for an unforgettable reunion, rest and revitalization, and the joys of snow shoeing onward toward iconic huts. 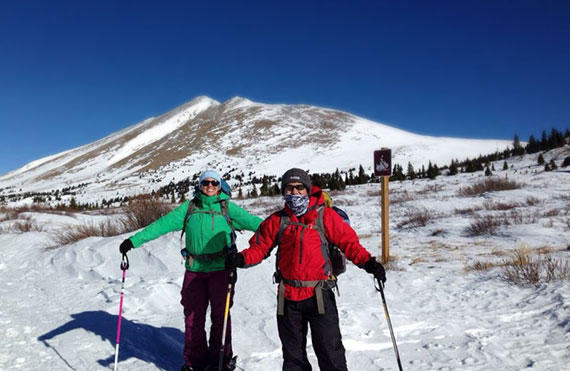 Piling into the car with our backpacks and gear, we drove to the Boreas Pass trailhead, located about 3.5 miles outside of Breckenridge, Colorado at 10,346 feet. Our group, which totaled 10 hardy souls, would be testing the elements, and a few comfort zones. It would involve an overnight trip to celebrate Brian’s 34th birthday at Section House, one of the 10th Mountain Division Huts that punctuate Colorado’s backcountry landscape. Each of us strapped on snowshoes or clicked into cross-country skis then gazed along the mountainside and down to the town of Breckenridge. The sky was robin's egg blue and the sun blazed onto the snow-covered trail. Temperatures were in the high 30s—balmy for January. However, conditions in Colorado are mercurial. The loaded packs on our back not only contained food and sleeping bags, but also waterproof gear and multiple layers in case the clouds rolled in, the temperatures dropped, and the snow started to fly. With preparations completed, we set forth. 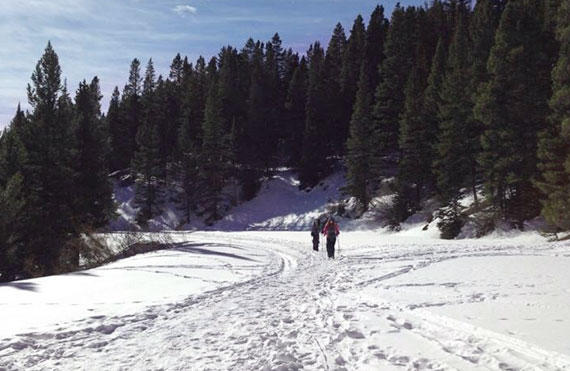 For some of the group, a hut trip was old hat. I, however, was a newbie as was the birthday boy, although this plan to get out and explore was his idea. An avid hiker and backpacker during the summer, the idea of transferring that fun to the snow appealed to Brian, as did the prospect of trying something different from the typical dinner and drinks celebration for his birthday. Also new to this type of adventure was a couple from Denver and Arthur, who had flown in from Texas to celebrate. For us, it was a totally novel—and somewhat intimidating—proposal. Hut trips are an iconic adventure in Colorado. It's a box to check on many residents’ bucket lists. A combination of trekking and camping, a hut trip is an opportunity to enjoy the outdoors and unplug with friends. Plus, they can be as extreme as you can handle, with trails to the hut ranging from less than a mile to more than 10. Our destination, Section House, was located approximately six miles from the Boreas Pass trailhead and the trek would take roughly four hours depending on factors like snow pack, snowshoe or skiing prowess, and acclimatization. The trail climbs steadily to 11,481 feet. 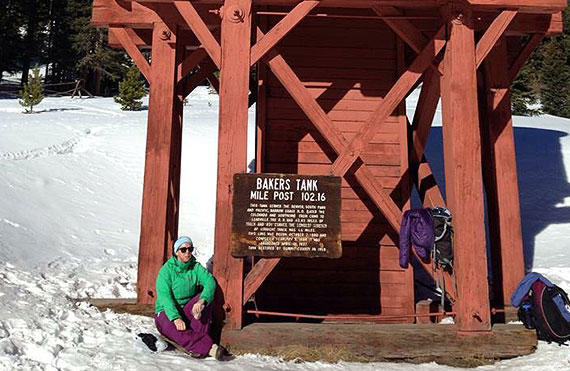 Built in 1882 by the South Park & Pacific railroad company, the Section House served the railroad men and their families that took care of a section of the narrow gauge railroad that ran from Leadville to Denver over Boreas Pass. It's one of 34 backcountry huts nestled in the Rocky Mountains, many of which are historical structures which have been updated and maintained by the 10th Mountain Division Hut Association. We started off strong, the snow crunching under our feet and sun warming our faces. Laughter came from those contending with cross-country skis—a bold choice as none of the four had ever strapped on the skinny, unwieldy implements before. A few comedic falls and lots of good-natured ribbing set them on course. We tackled the first three miles to Baker's Tank, a landmark at the halfway point, at a respectable 30-minute mile pace. We assumed we'd progress over the next three miles at a similar clip.

That's not exactly what happened. The trail had been, thus far, fairly well packed by other sets of feet and skis. This well-trodden path disappeared after the tank and we found soft, loose, snow that created an unstable surface. As a result, we expended a lot more energy than we anticipated from post holing and breaking trail while carrying 25-pound packs. In the shadow of the pine trees, we pulled on more layers as the sun disappeared behind slate clouds and the light flattened everything to two dimensions. Conversation died as our breathing intensified at 11,000 feet. The Texan, a CrossFit junkie, couldn't understand why he was struggling. The altitude, however, forced everyone to contend with shortness of breath and a slower pace. Trudging along, we all kept tabs on each other's symptoms. While shortness of breath, headache, fatigue and nausea can be signs of mild altitude sickness—an illness that can occur at elevations above 8,000 feet—more serious conditions such as HAPE (high altitude pulmonary edema) and HACE (high altitude cerebral edema) can be outcomes of severe altitude sickness. It's rare, but it's better to be safe than sorry. Moving slowly but steadily to avoid exacerbating any altitude sickness, we reached the hut after being deserted by the sun, escorted by a wind that blew the snow into dancing spires. The entire trip had taken almost five hours. Inside the hut, everyone had a job: two of us built a fire in the wood-burning stove, our only source of heat; another gathered snow in the large pot to melt and boil for drinking water; the three people in charge of appetizers started cutting up cheese and salami, arranging olives and crackers while another member of our group set the mulled wine to simmer on the propane burner. The hut eventually warmed. We enjoyed hors d'oeuvres while we prepared a hearty dinner of veggie stir-fry and rice, all the while catching up on our lives. As the wind provided a soundtrack to the evening, we cozied up around the fireplace and each other. "Hey, Brian. Thanks again for being born."