I licked my lips pathetically, desperate for a drink of anything, before glancing over at Danny—my friend and rival trail runner—hoping that I wasn't the only one suffering from the heat. Though judging by his haggard face, he wasn't feeling any better. The trees looked gaunt, their leaves parched in the scorching sun; the grass was yellowing; the birds had disappeared for shadier realms. Any passers-by must have thought, "What kind idiots would choose to run a 100k ultra marathon on one the hottest days on record in the UK?" But as Danny and I reached the ancient stones one mile from the finish line, the heat became rather inconsequential. We both knew we'd just been through something rather extraordinary. 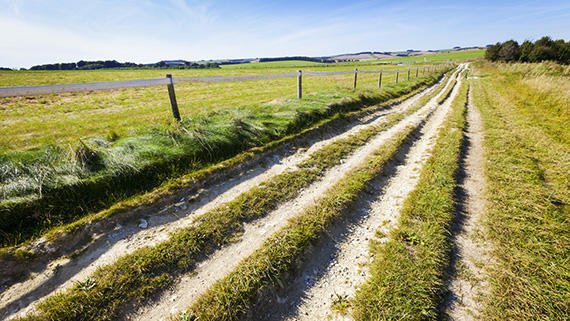 A conveyor belt of history

No one would call London, with its 600 square miles of urban sprawl and eight million inhabitants, a mecca for light-footed trail runners looking for their next fix. But what it does offer is access to an array of trails, footpaths and bridleways that allow anyone to dip in and out of the city with ease. One such trail is The Ridgeway, which proudly lays claim to being the oldest road in Britain. It was at the end of this trail, at Avebury Stone Circle, that Danny and I were standing thinking about the incredible race we were close to completing. Carved from chalk and originally stretching from the Dorset coast to the Norfolk coast, today's Ridgeway is much shorter—a mere 87 miles. Completing the trail is like traveling on a conveyor belt of history from its prehistoric days through Saxon invasions, pilgrimages and Roman marches to the present day. Yet it took us less than an hour from London to reach this route. There are many trails in the world to choose from, in far more exotic locations than England's Wiltshire, but very few offer as much history as The Ridgeway, with its panoramic views and ancient forts to the giant chalk carvings, tales of dragons and knights, burial chambers, Druidic stones and so much more. On this hellishly hot day, I was one of almost a thousand people taking part in the inaugural Race to the Stones—now the biggest ultra marathon in the UK. Although the race did not take us along the full length of the Ridgeway, it incorporated the most interesting sections. Like me, many of the runners had signed up for the race looking to reconnect with our country by running through an ancient landscape almost untouched by civilization. Despite being so close to London, there are relatively few houses near the trail, providing an unparalleled sense of space and tranquility.

I should mention that Danny is both my friend and my nemesis. Earlier in the year, we'd raced against each other in the Marathon des Sables—a six-day stage race across the Sahara Desert—in which he earned Top British Finisher, with me trailing in third. Three months on, we were on home turf. 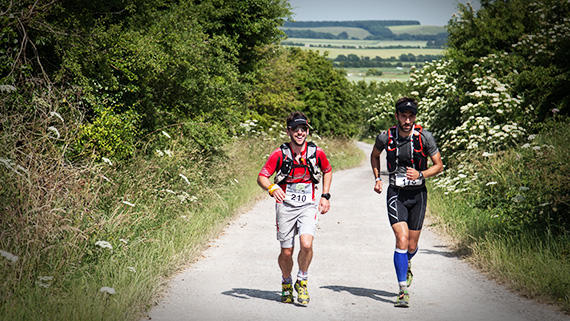 We soon found ourselves comfortably in the lead and decided to run together. With so much to see and chat about, it was all too easy to forget we were running a race. Often, we'd both want to stop and learn more about the trail. Some sights were difficult to pick out, such as the ancient burial mound of Wayland's Smithy, which contains a Neolithic chambered long barrow, once believed to be the home of Saxon smith-god Wayland. Then there's the Iron Age hill fort of Barbury Castle, the remains of which are deep defensive ditches and ramparts. But neither of us had a problem spotting the Iron Age fort of Uffington Castle, thanks to the giant 170-meter-long horse etched out of chalk on the side of the hill—an image as old as the fort itself. And I knew from my history books that only a few hundred meters away was Dragon Hill, where the patron saint of England, St. George, is believed to have slain the dragon.

This is what I love about trail running. Nothing compares to the feeling of being lost in time and history, following the contours of the land just as water might flow along a river."

This is what I love about trail running, I thought. Sure, the endorphin hit is great, but nothing compares to the feeling of being lost in time and history, following the contours of the land just as water might flow along a river. However, our rather touristic approach to the race meant that towards the end, other runners had begun to catch up. Dangerously dehydrated after running almost 100k, we gathered every ounce of energy to move our weary bodies toward the finish. But not quick enough. As we approached the 5,000 year-old stone circle, the only one in the world to contain a chapel and a working pub, I had to remind myself that this was still a race, and although I might not win, there was a chance I could beat Danny.

"Last one across the line, buys the beers," I said, making a sudden, painful attempt to run. "Oi! That's not fair," he shouted after me. I'm not sure if my delirious show of unsportsmanlike behavior was due to the aforementioned lack of fluids, or whether I'd just reached a nirvana-like state, but 10 minutes later I crossed the finish line, beating Danny by a whisker. As we limped toward the pub, we were all smiles and laughter. And as history teaches us, there's nothing better than talking about the delights of trail running over a cool pint of lager.