Step Into the History of the Hiking Shoe

You'd be forgiven for taking the technology in your boots for granted, but it's no small accomplishment to protect and comfort the 26 bones in your foot. In fact, the boots you see lining the wall at any outdoor retailer today represent thousands of years of footwear evolution. The earliest shoes—well, woven sandals—date back 12,000 years, and archeologists have discovered footwear from 3,200 BC that had leather bands stretched across the bottom. Those straps were likely meant to improve traction on rocky terrain, according to Italy's South Tyrol Museum of Archaeology. You might even call them the first hiking shoes. 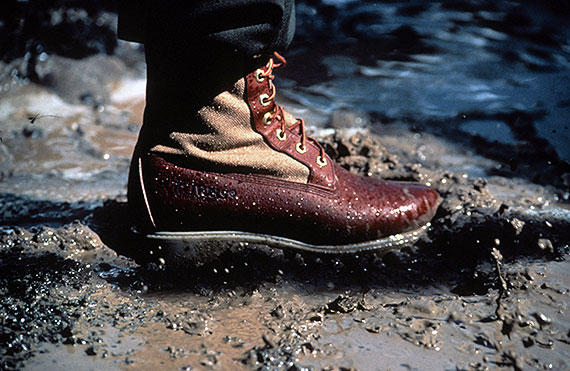 But it would be years before modern boots started to take shape. The hiking industry today started to grow in the early 20th century, according to the Forest History Society. That's when strolls through nature started to be viewed as a leisure activity. After World War I, people found themselves with more free time, and cobblers in northern Italy began tailoring boots to hikers. The nearby Dolomites created a steady draw, and the tradition of shoemaking was already ingrained in the culture, says Jonathan Degenhardt, marketing director for La Sportiva, a technical outdoor footwear company. Still, people struggled to keep their feet comfortable on the trail. A U.S. patent filed in 1943 highlights one of the industry's biggest challenges, water. To solve the problem of dank feet, the new hiking boot proposed leather uppers that rolled down to expose the ankle and turn the boot into something resembling a loose shoe. The idea was to vent out humid air. The patent's writer complained that traditional hiking boots were defenseless against water, and on the challenges of leather, he wrote: “It becomes mildewed rapidly and thus deteriorates in such a short time that it is of little value." 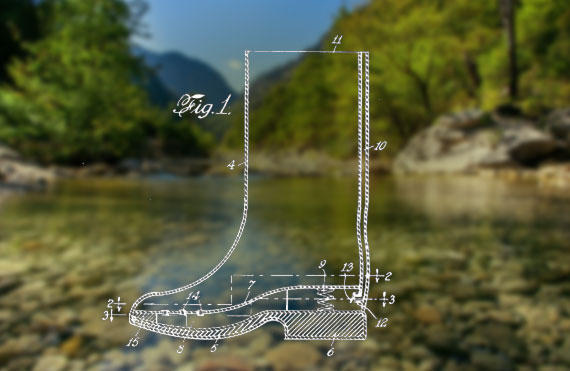 Another U.S. patent filed in 1949 addressed the problem of wet feet in a different way. It called for a pump underneath the footbed to push sweat-humid air through pipes running vertically from the insole to the top of the cuff. With each step, sweat would presumably blast out through the top. That one didn't catch on. Hiking boots coming out of Italy were built strong, but comfort was simply not among their core virtues. “The materials were all leather," says Degenhardt. “The midsole would be leather, the insole would be leather. There's not a lot of cushioning there, but it provided protection against snow and rocks." Improvements came slowly, and by and large, these leather boots were still protecting hikers' feet in the 1970s, says Degenhardt. In 1979, the GORE-TEX Brand decided to enter the boot game, and in 1980, two companies—Danner and Donner Mountain Corporation—began selling the first GORE-TEX footwear. They used a polymer that the GORE-TEX brand developed called polytetrafluoroethylene to make lightweight footwear that was immediately comfortable and still waterproof. Leather was relegated to a supporting role, generally aimed at reinforcing sensitive areas like those around the lacing eyelets. What followed was something of a revolution in hiking. Driven in part by advancements in athletic shoes, the '80s saw the adoption of other non-traditional boot materials like ethylene-vinyl acetate (EVA) and polyurethane, durable polymers that flex easier than leather but still offer enough support for the trail. 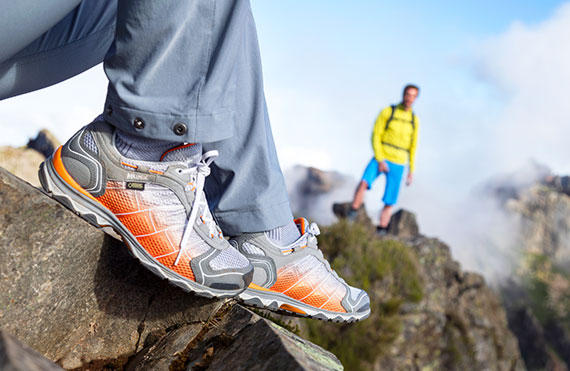 “That lowered the break-in time and the cost, and it really improved the comfort," says Degenhardt. Boots were becoming better at handling harsh environments, too. Insulation previously used in jackets was becoming more common, as were rubber soles from companies like Vibram and Michelin. “The result is lighter, faster, and more protective," says Jamie Starr, the marketing director for Salewa, another technical outdoor footwear producer. Those advancements produced the boots you're probably most familiar with now. Last year, GORE-TEX SURROUND® technology launched the latest innovation in waterproof, breathable technology. A full-foot liner inside the shoe allows sweat to move away from the foot and escape through the sidewalls. But step into a stream, and no water comes in through those same breathable sidewalls. The technology has already been adapted by shoemakers such as Mammut, La Sportiva, Salewa, and Scarpa.

“We're at the next frontier with the GORE-TEX SURROUND® technology," says Degenhardt. “The shoes we're creating with it are inspired by mountaineering boots, running shoes, and hiking shoes. They're a response to the evolution in what we've seen in what people are doing with our products." Which is to say, people are hiking with lighter gear, and covering more ground in short bursts of time. As trends in hiking shift, technology will continue to adapt. But today, many of the high-end hiking boots you see in stores are still produced in northern Italy. “It's not an easily duplicated trade," says Degenhardt. “It takes a lot of high-quality materials, special tooling, and a lot of experience." To see GORE-TEX SURROUND® footwear styles and find a retailer go to www.gore-tex.com/surround.