Lucy Walker was 28 when she set two new mountain-climbing records — an impressive feat for anyone.
However, when you consider that she suffered from crippling rheumatism, coupled with the fact that she was draped in long Victorian skirts from the period, it's downright incredible to reflect on all she accomplished. Moreover, in 1864, women were in fact discouraged to partake in physical activity. Encouraged by her father and her brother, she successfully ascended the Balmhorn peak of Switzerland's Bernese Alps on July 21, 1864, becoming the first person to do so, regardless of gender. 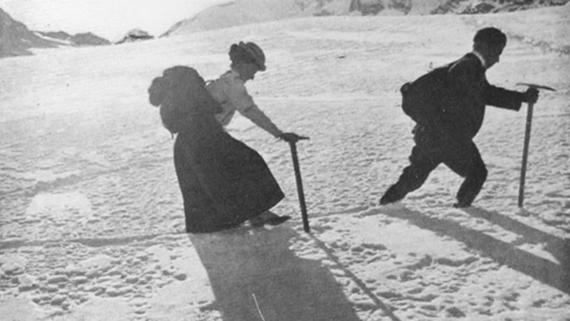 At the summit, she celebrated with her customary meal of cake and champagne. Not one to rest for very long, four days later, she became the first woman to summit another peak in that range, the Eiger. Seven years later, on August 22, 1871, she'd do it again, this time by reaching the summit of the Matterhorn. The social dictates of Walker's time gave the female sex a limited role in sports and mountaineering. Yet when she conquered the Matterhorn, Punch magazine was impressed enough to abandon its oft-satirical voice and publish a poem in praise of her achievements. She broke barriers on behalf of other mountain climbers as well. In 1907, in answer to the male-only policy of the prestigious Alpine Club, Walker helped found, and would later preside over, the Ladies Alpine Club. Her encouragement of other female mountain climbers played an important part in breaking some of the taboos that surrounded women in sports.

During her climbing period, from the age of twenty-two until her early forties in 1879, she undertook an astonishing 98 expeditions. She was the first woman to the top of no less than 16 summits, ten of which were over 4,000 meters. She passed away in 1916 at the age of 80, helping usher in a new generation of female mountaineers and adventurers. Learn more about Lucy Walker and her achievements in this short film by the GORE-TEX Experience Tour*.

*The GORE-TEX Experience Tour History Sessions with Edurne Pasaban have since commenced. Applications are no longer accepted.