As the earth buckled and swayed, leveling communities at the epicenter near Kathmandu, sherpas supporting an exploratory expedition hundreds of miles away in the remote west felt only insignificant tremors. However, they did find it strange when a nearby pristine blue glacial river, Lota Karnali Nadi, mysteriously turned brown. " I didn't give it a lot of thought at that time but it all made sense five days later," recounts the expedition leader, Freeman-Attwood, connecting the dots in retrospect. 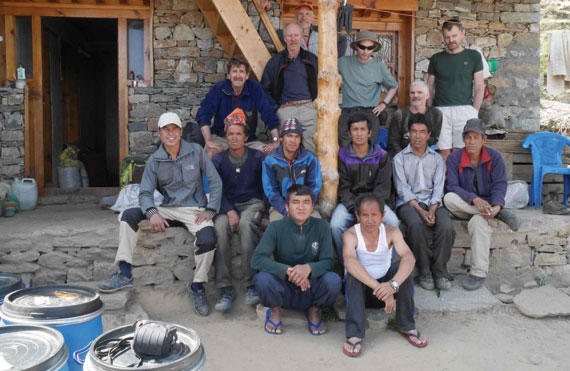 The team of six climbers, led by British mountaineer Julian Freeman-Attwood, were trekking deep into the northeastern end of Nepal bordering Tibet to summit previously unscaled 6000-meter-high Himalayan peaks in the Gorakh Himal Range. This particular region, dotted with pristine valleys, lies more than 400 kilometers  from the hustle of Kathmandu and Nepal's busiest climbing routes—so far away, in fact, that the presence of westerners is extremely rare. Freeman-Attwood and his team were quite possibly the very first westerners the villagers of Nepka—one of the last communities in the region—have ever seen. Freeman-Attwood attributes the allure of the remote mountain range to its exclusivity. "Nothing at all —ever — has been climbed in that range. Not a single mountain climbed or even approached," he says. It was exactly this remoteness that drew him to Gorakh Himal—the thrill of making the first ascent. As one of six 2014 recipients of the GORE-TEX brand Shipton/Tilman Grant, Freeman-Attwood and his team embarked on their journey in April 2015 with a goal to summit as many of the five unexplored peaks in this range—Langtachen (6270m), Gorakh (6088m), Assajya Tuppa (6265m) and Absi (6254m)—as possible. Freeman-Attwood and his team were following in the footsteps of English mountaineers Eric Shipton and Bill Tillman, who famously pioneered lightweight expeditions and exploratory style treks into uncharted Himalayan territories in the 1930s. Now in it's 25th year, the annual GORE-TEX Brand Shipton/Tilman Grant (in concert with The Mount Everest Foundation and The Alpine Club) awards $20,000 for six expeditions that tackle goals as imaginative and daring as the ones its eponymous chased. Following a 2013 base camp reconnaissance trek, Freeman-Attwood's team expected the 2015 expedition to last six weeks, with a full three spent climbing the peaks from base camp. Almost as soon as they landed on the remote airstrip at Simikot in northeastern Nepal, however, they started running into hurdles. 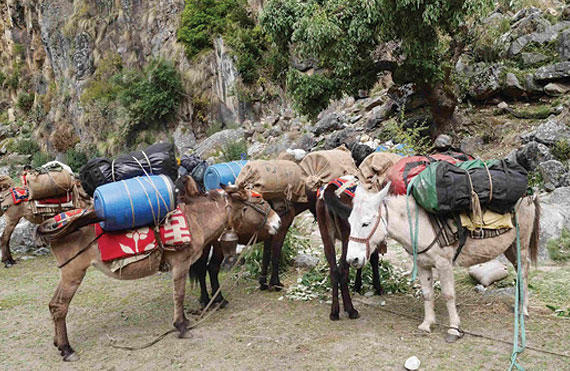 First, there seemed to be an unusual amount of snow above the 3,500-meter mark for the time of year. Initially unperturbed, they plowed ahead towards the base camp, a 10-day trek away from Simikot, carrying almost a metric ton of gear and supplies on 20 mules. The first potential deal breaker occurred during the last three days of the trek to base camp in the Bholbihan valley. "We knew we were in trouble when we reached the entrance to the valley", recalls Freeman-Attwood, when they encountered the snow-covered boulders blocking the mules' route through a birch forest. There was a very real chance the animals could snap their legs on the slippery, uneven terrain. The unprecedented snowfall in the lower reaches of the forest had made reaching the base camp next to impossible, at least on the original route. And without the mules, there would be no food and equipment with which to make camp.

The unprecedented snowfall in the lower reaches of the forest had made reaching the base camp next to impossible."

Just as a few of the team members were hatching a risky, last-ditch attempt to cross over into the valley and summit Assajya Tuppa in a week, word came of a devastating earthquake in Nepal. It was April 30—a full five days since the disaster. Three of the Nepalis on the team came from villages that had suffered massive destruction. Freeman-Attwood knew an immediate return was the only option. A failed expedition was nothing in comparison to the devastated homes and lives facing their team members and the rest of Nepal. The peaks would remain where they were, ineffable and inviting, calling men and women like Freeman-Attwood back for another shot, someday.

Regardless of summits reached or unreached, Freeman-Attwood's mission at its very core represented the spirit of exploration—the drive to venture into uncharted territories and face unknown obstacles—in which adventurers around the world participate every day. Drawing upon years of experience spent exploring outdoors, Freeman-Attwood finds his silver lining to the ill-fated expedition. “Even if things didn't go according to plan, to have been on new, unexplored terrain was a very thrilling thing," he says. Shipton and Tilman would have been very proud.