What if avoiding crowded tourists trails is keeping us from experiences that could change our lives, or at least our perspectives? Before Daniel Wildley caught his flight home, he decided to give Angel’s Landing a try. He was glad he did.

The alarm sounds at 5:30 a.m., and I drag myself out the door. Though the sun is still around the other side of the earth, the desert heat of Utah bursts through the doorway and wraps itself around me. I am not in the mood for its stifling hug. I'm in Springdale, Utah to enjoy the mountain biking. After several early mornings and dozens of miles racked up in the searing sunshine, the last thing I want to do is join the hordes of tourists hiking the overcrowded trail up to Angel's Landing. It's the most accessible — and busiest — peak in the Zion National Park. I'm facing a five-hour drive to Salt Lake City before mid-afternoon to make my flight back to the UK. As the coffee rouses the rational part of my brain, I'm wondering how I convinced myself this was a good idea. But there is good reason; I've barely seen the National Park. Other than an aimless midnight drive and a short hike in a heavily overcrowded ravine, this is my only chance to really see the park, since mountain biking is not allowed inside its boundaries. 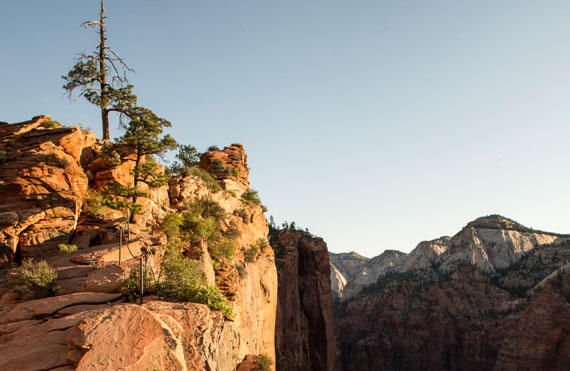 I walk down to the bus stop for the 6 a.m. shuttle, the first of the day, and hoping the tourists are still in bed while partly wishing I was. But the bus is full. I don't want to sound like I'm averse to humanity, but don't we all want to have the beauty, solitude, and peace of nature to ourselves sometimes? I genuinely want everyone to enjoy the outdoors — just not at the same time as me. I jump off the bus and hit the trail at a pace. I confess to preferring solitude, but I'm occasionally guilty of adventure-snobbery too. I presume that if this is a trail for tourists, I'll be up and down in no time and have the summit to myself. I'm partly right. The trail is wide and paved, presumably to allow access for wheelchair users and infants, and why not? But it's not inspiring me, so I'm walking more briskly and checking my watch every five minutes. I've left my fellow bus passengers behind by now, and I know why: They're actually enjoying themselves. I'm rushing to check a classic off my list while everyone else is appreciating exactly why it is a classic. It's time to drop the cynicism but since I have a plane to catch, I can't drop the pace. 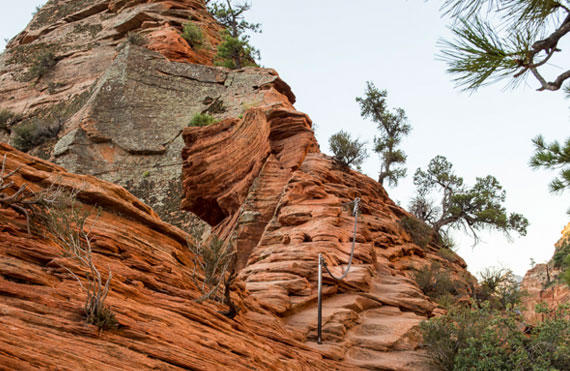 The trail winds, the incline steepens, and the paving disappears. Walter's Wiggles puts a huge smile on my face, not only with its name but because the switchbacks are coming so thick and fast I feel like I'm dancing my way up the hill. My heart is pounding. This isn't such a gentle stroll after all, I think. My thought is confirmed at the top of Walter's Wiggles, as the path disappears into a natural staircase of sandstone layers, off-camber with a length of chain to hold onto that protects from the cavernous drop that has appeared. This just got interesting. And then the payoff. I've emerged onto a small plateau from where the most knife-edged of all ridges leads my eye to the final climb onto Angel's Landing. And it's a climb; I've seen Vie Ferrate in Italy that are less daunting and exposed. The Zion canyon, which feels big from the valley floor, is gaping below as far as the eye can see.

Summits can elicit all kinds of emotions, but this one is teaching me a lesson in humility. I sit and wait for the sun to break over the Eastern wall of the canyon and illuminate the distant valley floor. My flight seems less urgent. And other than a friendly chipmunk, I have solitude. But I'm not as clever or fast as I think, and crowds are beginning to gather. For all my scorn about this so-called tourist trail, there's really no difference between me and everyone else. We're all here for the same thing and I don't mind sharing it. There's a reason why tourist spots are popular, and Angel's Landing is breathtaking.