Explore Support Pages
Read how one couple took a road trip across France to pursue adventure and professional outdoor photography. This is one trek you don't want to miss.

My girlfriend, Alice, and I watched from the upper deck of the ferry to France as England's famous White Cliffs of Dover turned gray and distant; it would be three months before we saw them again. My head battled to suppress the fear of leaving our lives behind while my heart soared at the prospect of unknown adventures to come. It was the start of our Vanlife. Next to us was a tray table for used glasses from the bar. Someone had scratched off the letters G and L from the sign so that it read "Place your empty...asses here." We'd decided to do something similar, in a way, emptying our lives of our usual connections and taking ourselves on the road. We were craving adventure. It was the first winter in years that we hadn't spent working in tourist chalets in the Alps. But that wasn't my only motivation for turning our lives upside down—my professional future was at stake. For years I'd been trying to forge a career as an adventure photographer, not only to indulge my passions but to share them and inspire others to travel and challenge themselves. I'd funded that dream with various jobs in outdoor retail and hospitality. Despite working with some great clients, I was only able to focus part-time on photography. The next step—to make a full-time living—required a whole new level of commitment to my subject. I had to get out and live it. It was a gamble. The stability of employment and the security of a home were gone. I had faith in my ability and my determination, but they would count for nothing if luck was against me. If I failed to find work, what would I have left? The decision to go all-in had come down to one thing my mother told me: "It's better to regret doing something, than to regret not doing it."

Three months of uncertainty stretched out before us. We had a budget of £30 per day that had to cover thousands of miles worth of fuel for our van as well as all other living expenses. And the van was now our home. When most people think of living in a van, they probably imagine a Winnebago, an RV, or even a VW-style camper. Ours was a family car. We removed the back seats and built a basic sleeping platform out of plywood with storage underneath, lined the windows with pieces of cut-up camping mats, and bought a large canister of gas for the camping stove. 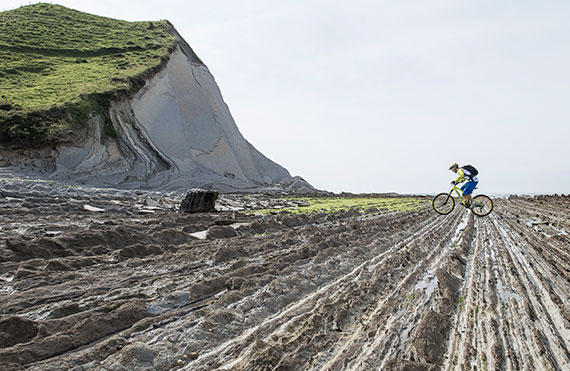 What we lacked in luxury we made up for in optimism. After a few days on the road, we crossed France to the northern coast of Spain, and that optimism seemed well placed. Worrying about whether I'd succeed took a backseat and sunshine softened the risk of what I was attempting. Our new outdoor life helped us sleep blissfully on our cheap foam mattress. The constant fresh air was a kind of narcotic. I'd arranged to shoot with Doug MacDonald, a British expat running a mountain bike guiding company called Basque MTB. I was hoping to sell some shots to his sponsors and bike magazines. Although it wasn't financially lucrative, Doug taught me something much more important. He'd given up a career in engineering to follow his passion for riding bikes in Spain, married a Basque girl, and made a success of his guiding business. Sitting on a mountain watching the sunrise Doug told me, "I still can't believe this is my life." His irrepressible grin gave me an insight into the meaning of success. Engineering may have given him job security, a good career path, and a pension but it hadn't led to that look of contentment. 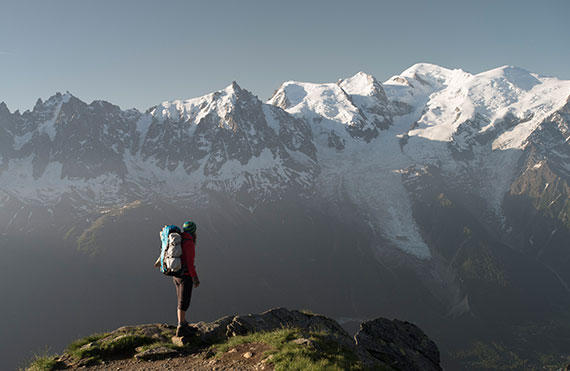 A few weeks later we crossed France again into the Alps, where I'd arranged another couple of jobs. Winter clung to the sides of the Chamonix valley, but it didn't stop us camping in the mountains above the town, with a panorama of the Mont Blanc massif. I'd arranged a ski touring photoshoot with Alison Culshaw, an off-piste ski instructor. I also shot a promotional film for Matt Barker who runs Mountain Adventure Camps teaching children to enjoy the outdoors. Seeing people happily live "alternative" lifestyles went a long way to vindicating our trip, and our decision to pursue an adventurous existence. Instead of dreaming from behind a desk and living for the weekend, they'd embraced the things they love, integrated them into their daily existence, and dispensed with unnecessary luxuries. As Matt put it to me, "You don't need a big TV and you don't need an expensive car. In my old job I used to clock-watch. Now I hardly need to know what day it is." I was beginning to believe that passion could bring success, perhaps not in the form of material riches, but because its very pursuit can be a success in and of itself. The rewards would come in simply making enough to survive and spending my days doing what I loved. But one experience above all made me think that the gamble had paid off. 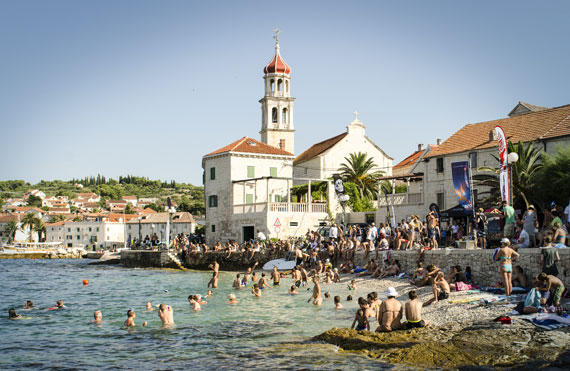 We'd driven further east, through the Swiss and Italian Alps, past Milan and Venice and through Slovenia. Once we reached Croatia's Dalmatian Coast, we intended to indulge in some island hopping to add variety to our adventures and my portfolio. I'd been in touch with the tourist board on the island of Brač to inquire about opportunities to photograph adventure sports. But I received no information. We had a few aimless days and despite enjoying the beaches, I was leaving empty handed. My future was wrapped up in this adventure, yet I'd failed to find work for a couple of weeks, and van repairs had eaten into our meager budget. I couldn't shake the feeling that it might be the end of the road. We were in line to board the ferry leaving Brač, when a local man named Hani Salama saw my camera and struck up a conversation. He got excited when I told him I specialized in shooting outdoor sports. Hani had been contracted to film an adventure festival on Brač that weekend—"the Croatian version of X Games," he called it—and needed someone to shoot stills. Suddenly we were an integral part of Croatia's best-kept secret: the 'Vanka Regule' festival. Hundreds of climbers, kayakers, bikers, windsurfers, skateboarders and runners descended on the picturesque waterfront to celebrate everything outdoors. Unexpectedly I had throngs of athletes as potential photo subjects and, most importantly, I had a client to pay for those shots. 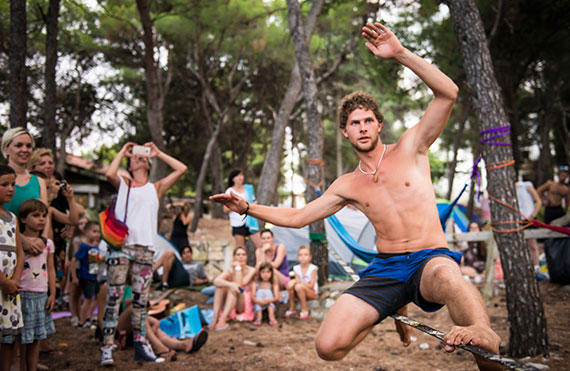 The trip as a whole had grown my portfolio, provided a basis for working with lots of editorial and commercial clients, and more importantly, expanded my networks and friendships. But that chance encounter at a Croatian ferry port was the payoff for me, financially, but also symbolically. It told me that by committing to the search—through belief, perseverance, and hard work—I would find what I was looking for; that the next opportunity could be just around the corner and so I needed to stick to the road I was traveling. Dreaming is easy. Pursuing a dream is not. If I hadn't met Hani I'd have been out of money and heading home. But I wouldn't have regretted a thing because I gave it my all. Serendipity, I learned, isn't entirely a fluke. Get out there, commit yourself, chase your passions, and give luck a chance to find you. Then you can live without regret.