Explore Support Pages
Ernest Shackleton set out on an expedition to cross the continent of Antarctica more than 100 years ago. Seasoned explorer, Charlie Paton, picks up where Shackleton left off, joined by five brave adventurers. See what's in store for Paton and his team.

This month, six expeditioners will touch down at an Argentinean research station on the very edge of Antarctica. After experiencing the initially thrilling (but soon to become tiresome) sensation of -57 degree temperatures delivered by 60mph winds, they'll start walking. Their goal: to finish what celebrated British explorer Ernest Shackleton attempted exactly 100 years ago—an 1,800-mile trudge across Antarctica, from Vahsel Bay on the Weddell Sea to McMurdo Bay on the Ross Sea, via the South Pole. 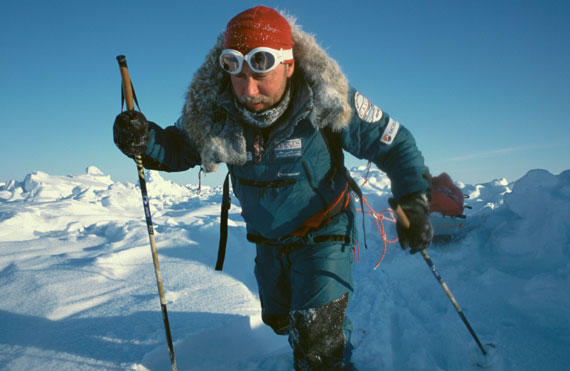 The trek will take them about three months—that is, if they make it. Shackleton famously never got beyond the Weddell Sea. His boat, The Endurance, became ice-bound and the mission ultimately aborted. Charlie Paton—expedition leader and former British Royal marine—however, is counting on better luck. After following Shackleton's route across South Georgia in the southern Atlantic in 2008, a trek Shackleton made in order to get help for his crew following the failed crossing, Paton became obsessed with recreating Shackleton's route across the continent. The fact that Paton, who's been completing polar treks for 15 years, has fitness and technology on his side doesn't negate the dangers of punishing cold, chilling winds and lots and lots of mileage he and his two team members will endure along the way. We sat down with Paton shortly before his monumental undertaking to talk about the expedition and the mental and physical peril of life at the bottom of the world.

Mike Peake: What's driving you to take on this challenge?

Charlie Paton: I'll admit that when I'm at home I don't feel cut out for everyday life. When you've been pushed to your limits on adventures, everyday tasks feel boring, and the idea of doing what Shackleton had tried all those years ago became an obsession. The more I dug into his story, the more I became fascinated by how Shackleton had assembled some like-minded explorers and just gone for it. He did something almost unthinkable 100 years ago in terrible conditions with basic gear. I'd lie awake at night wondering if I could finish what he'd started.

MP: What does it take to put together an expedition like this?

CP: It's taken about three years. It's little wonder that no one has gone back and completed Shackleton's route; the size of the trip, the finances needed to get there and the commitment it takes are all immense. But the more immersed I became the less everything else mattered. I sidelined my career as a polar guide for a year and thus lost all my income while I planned the journey. My girlfriend said months ago that I should pull out of it, as my financial situation had become so desperate, and while I knew she was right I told her it just wasn't an option after trying so hard to get this far. 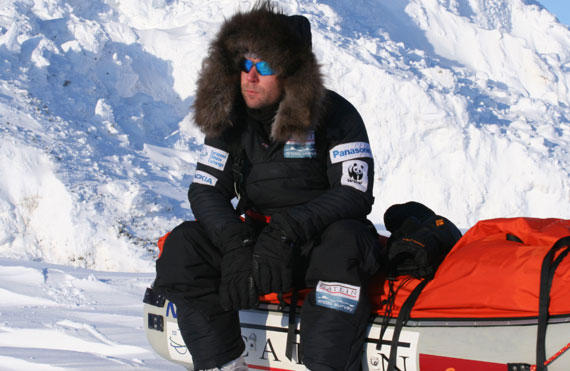 I sold off most of my outdoor gear and my beloved camper van to pay the bills. I sold furniture from my home to pay the phone bill. I even postponed getting engaged because I couldn't afford the ring. Antarctica became my whole world. If I was going to do it I was only going to get one shot, so I sure as hell better make sure I was ready for it, super-fit and mentally prepared.

MP: You could have made a name for yourself as an explorer of sun-kissed tropical islands—what is it about snow?

CP: It's got a magnetic draw. Every time I've been to the North Pole, I've wanted to go back and have now been 11 times. I love the vast wilderness. Up there life is very, very simple. You can shut off the outside world and just focus on what your goal is.

MP: What kind of perils have you encountered on the ice?

CP: I fell into a crevasse in Antarctica—it was covered in snow, completely hidden. I went straight down, but luckily it was what's known as a tapered crevasse, and after 100 feet I stopped, having become wedged in. About two months before, I'd lost my brother, and as I was falling down and tumbling off the sides I thought, “Oh my God, mum's about to lose another son." It was more a feeling of sadness than anything, but then I stopped falling and I realized that the rest of the team could get me out again. I had cracked ribs and very bruised legs and a bruised frame of mind, really. 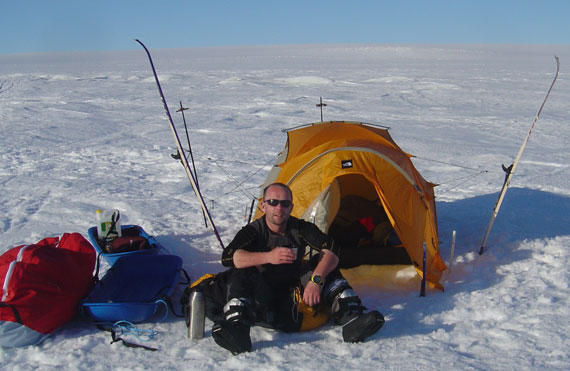 MP: Do dangers like this play on your mind?

CP: Well, I've definitely had many a sleepless night about the crevasses we might encounter. There are so many of them, hidden and unmapped. It's a bit like Russian roulette. The time I fell into one there were 16 people to pull me out; there are only six of us this time, so the chances of being pulled out again are slim. There are plenty of other dangers as well—everything from frostbite to 100-mile-per-hour Katabatic winds that hit you without warning. Fire's also a risk, believe it or not: boy scout rules are tossed out the window in the polar regions, and you do your cooking in the tent.

MP: How did you assemble your team?

CP: In January I put a selection process in place similar to what Shackleton supposedly did 100 years ago. I had 500 applicants, and the best 50 came to Wales for a long weekend of sleep-deprivation, food deprivation and some hard tasks in terrible conditions. I selected two teammates: Tom Alden, 32, another former Royal Marine, and Mike Byrne, 44, also ex-military. We live all across the UK so we've been doing our own preparation but meeting up regularly to make sure we're at a similar fitness level. There's been lots of endurance training, like dragging a 50-kilo tractor tire on trails. The drag's similar to what you get with a sledge on the ice.

MP: What's the daily grind going to be?

CP: Up at 5 a.m. or 6 a.m. to melt water for breakfast and to drink later in the day, then eight or nine marches of an hour to 90 minutes each. You have a 10-minute break to get some food in you and then you're off again.

I love a challenge—the harder the better. That's what appeals to me, and to my mind this is the last major 'first' that's left."

MP: Do you have much of a technological advantage over Shackleton's party?

CP: We'll have exactly the same conditions he would have had 100 years ago: the same crevasses, same wind, same cold. Our advantages include the equipment we'll have, our planned meals and overall diet, and the fact that we'll ready and able upon arrival. Shackleton's men had sailed for three months in terrible conditions with bad food. Everything we've got is a fair bit lighter, too, and we have better clothes and gear. Most of the outerwear we have is GORE-TEX brand —Haglöfs, Millet and Arc'teryx—which we put over multiple layers to stay warm. Hopefully my main advantage, however, is experience. I love a challenge—the harder the better. That's what appeals to me, and to my mind this is the last major "first" that's left.

MP: Finally, what will a successful expedition mean for you?

CP: I feel like I have something missing in my life that I haven't quite found yet. I think this expedition will fill that hole for me. When I'm on the ice, I'm in my element and I feel like that's where I belong—a bit like Shackleton did, I guess. This feels like the next big part of my life. I'm excited about it, I feel confident, and I'm really proud to be doing it and paying honor to those heroes from 100 years ago. Follow along as Charlie and his crew set out on this momentous expedition.