Explore Support Pages
"There shouldn't be so much snow here," said our guide." 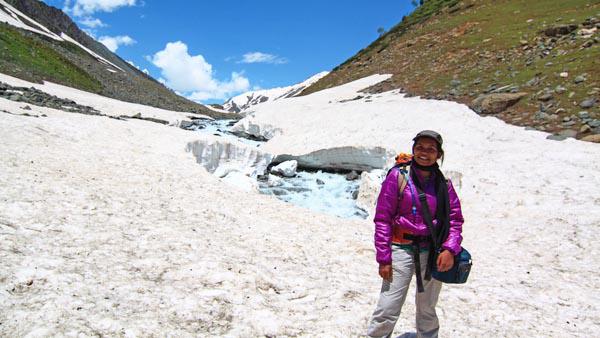 Last time I crossed this mountain pass, it was a green meadow filled with wild flowers." We'd just reached Nichnai Pass, a 13,000-foot-high crossing in the Pir Panjal Range in Kashmir, India, and his words were not encouraging. Our team—a motley group of strangers along with a local guide and his team—was hiking in the alpine meadows of Kashmir, a place famously known as "Heaven on Earth." It was early June, and we had planned to spend a week in the mountain valleys near Sonmarg, exploring the seven gorgeous lakes that dotted the celestial landscape. The hike had started on a beautiful note, with clear weather and sunny skies. However, as we ascended over the next two days, we began to come upon slope after snow-blanketed slope. None of us—our guide included—were prepared for this rather unseasonal development. We had no crampons, no ropes. But we slogged on, assuming the slush was the worst we'd find. 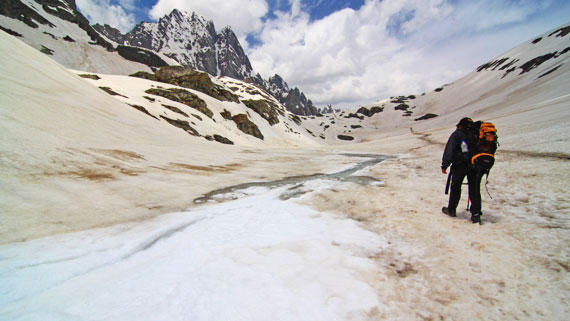 On the third day, we were proved wrong. Billowing clouds roiled in the blue sky, creating a pretty drama, until they began to grumble. The skies greyed out; a storm system appeared in the distance, and suddenly began to close in, fast. Within minutes, the only thing I could see through the white curtain of snow was the jagged skyline created by the nearby peaks. Our group began to splinter as we increased our pace. Our guide had not made a mistake in his preparation for this trek. During the Himalayan summers that last from June till September, there is almost no snow on this route. That, of course, was little comfort as we slid and scrambled on all fours along steep slopes slick with hard ice, desperate to escape the high mountain pass and make it into the valley beyond, where the snow would blessedly turn to rain. And make it we did. By that evening, as I walked, snug in my rain gear and on the other side of those battling clouds, my spirits began to rise. After all, what's a hike without some unanticipated ordeal? Plus, we were closing in on Vishnusar—the first of seven stunning lakes we planned to encounter. Things were looking up.

Upon reaching the lake, however, we were informed that we'd have to turn back. The mountain passes ahead were blocked with heavy snow that hadn't melted yet. Any chance we might have had in crossing had been sealed shut by the fresh snowfall.

The mountain passes ahead were blocked with heavy snow that hadn't melted yet. Any chance we might have had in crossing had been sealed shut by the fresh snowfall."

The mood at the campsite turned as grim as the stormy weather. I had been waiting a whole year to hike in Kashmir, and it wasn't like I could just return whenever I felt like it; the window in the Himalayas during which the passes are open and conditions are at their least dangerous is a paltry three months. I couldn't help but sulk. Thankfully, for my own state of mind and that of my fellow hikers, an older member of our group took notice of my poor attitude and quickly pointed out my behavior wasn't going to clear the passes. And, she noted, there was still plenty to enjoy right here. 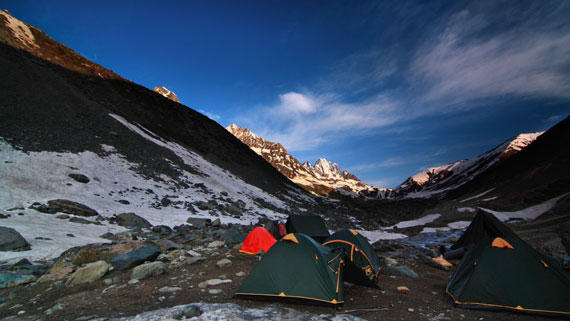 After all, we were still camped by the side of a beautiful, trout-filled, gurgling glacial stream. With plenty of free time on our hands and the evaporation of our itinerary, we were free to explore the pristine valley at our leisure. We wandered around the half-frozen Vishnusar Lake, watched the peaks reflect in the pools between the floating ice sheets and spent an afternoon amidst a patch of wildflowers. It was cheerful work. We spent the rest of the week hiking back to civilization at our own pace. Of the seven lakes, we got to see only two—one half-frozen and the other completely sealed by ice. However, had it not snowed, we would have been robbed of a view few others have been able to see. It was the silver lining to the storm clouds that almost ruined our hike. In the mountains, one's best laid plans tend to crash like a house of cards, but even the most dismal weather can bring a fresh new perspective.