Feldkirchen-Westerham, 1. July 2014 – In its “Responsibility Update 2014”, W.L. Gore & Associates (Gore) provides information for the first time on the progress of its Fabrics division’s social and environmental programme in the financial year that came to a close on March 31, 2014. Gore reports that at the end of 2013, the Fabrics Division became one of the first manufacturers of functional fabrics to eliminate perfluorooctanoic acid (PFOA) from raw materials.For the first time, Gore also published Life Cycle Assessment data for a functional GORE-TEX jacket. The company plans to report annually on these themes in future. 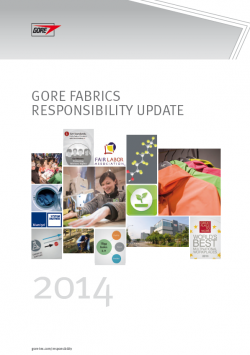 Gore has been working on environmental and social programmes for almost 30 years, from the elimination of chemicals of concern such as PFOA through the certification of Gore production facilities to the bluesign® standard to the achievement of uniformly high social standards worldwide.Between April 2013 and March 2014, Gore substantiated the exceptional importance longevity of a functional outdoor jacket represents with scientific data.This research demonstrates that manufacture and transport account for nearly two thirds of the global warming potential of a jacket while care of the product by end users accounts for around 35 per cent. The results of the Life Cycle Assessment show that longevity is the key factor in reducing the environmental impact of a functional jacket,” says Bernhard Kiehl, leader of the sustainability team at Gore Fabrics. PFOA eliminated Whilst Gore is particularly renowned for the high quality and longevity of its products, the company also plays a pioneering role in other spheres. With regard to the elimination of chemicals of concern, for example, at the end of 2013 Gore became one of the first companies in the sector to use only PFOA-free raw materials in the manufacture of functional textiles. Percentage of bluesign®-certified Gore laminates rises to 50% Another stand-out from the Responsibility Update 2014 is that Gore increased the percentage of bluesign® certified Gore laminates to over 50% of its total laminates volume for consumer performance apparel in the Autumn/Winter 2013/2014 collection. Gore has been an official partner of the bluesign® standard since 2010 and all Gore production facilities are bluesign®-certified. “We continue to work closely with our suppliers to ensure that their materials are also bluesign®-certified. We will then be able to increase the percentage of bluesign® Gore laminates even further,” adds Kiehl. “Best Workplace” awards: Gore continues to blaze a trail In recent years Gore has repeatedly received international “Best Workplace“ awards in Europe and the US. In 2013 Gore was also named one of the “Best Companies to Work For” for the first time in China. The company had its fabrics production facility in this country certified to environmental standard ISO 14001. Gore also mentioned in its “Responsibility update” that it supports social initiatives such as the “Bird’s Nest” project and the Mountain Forest Project in Upper Bavaria. The complete ”Gore Fabrics Responsibility Update 2014“ is available for download here.

W. L. Gore & Associates is a global materials science company dedicated to transforming industries and improving lives. Since 1958, Gore has solved complex technical challenges in demanding environments — from outer space to the world’s highest peaks to the inner workings of the human body. With 9,500 Associates and a strong, team-oriented culture, Gore generates annual revenues of $3.5 billion. www.gore.com