“Tell me about the bears.” It’s the first thing I say after I walk up to the counter at the Riley Creek Mercantile. Yeah, it’s a strange opening line but it’s all I’ve been thinking about since we decided to camp in Denali National Park and Preserve three months ago. I keep going back and forth, unable to decide if I want to see one. One moment I think the trip will be ruined if I don’t, and the next I’m paranoid that I’ll get mauled. The guy behind the counter just stands there, smiling. Maybe I watch too much television, but I expected everyone in Alaska to be rugged, with broad shoulders and wild beards (well, at least the men). This guy definitely had a beard, but with his narrow shoulders, slender hands, and long blonde hair parted in the middle, he looked more like a barista in Portland. “If a black bear attacks, don’t run,” he says, still smiling. “You’ll need to stand and fight.” How can he be so calm? My eyes grow wide. I grew up in Minnesota and saw my fair share of black bears in the wild, but I always made a point to keep my distance. This guy wants me to fight one? I wasn’t in any rush to test my strength against something that rips raw flesh from bone with its teeth. “Grizzlies are different,” he continues. “You want to stand up and get real big. Wave your arms and talk to it, but don’t shout. You don’t want it to think you’re challenging it.” 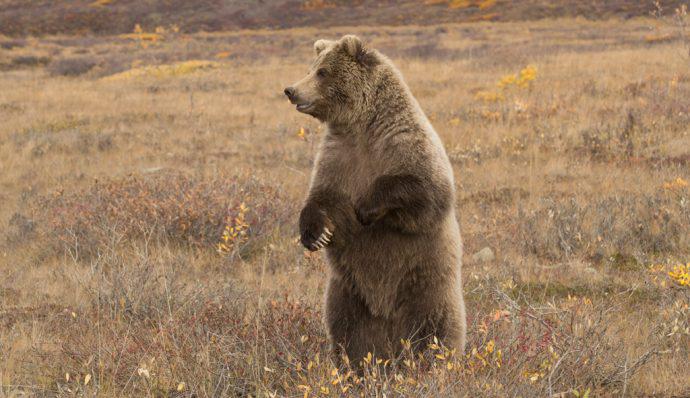 Wait, did he just say wave and don’t shout, or shout and don’t wave? Besides, if one of the largest predators in the world charges at me the urge to run is going to be overwhelming. I’m not sure I’ll be able to resist. “If the bear gets too close, don’t fight,” he says. “Just lie there and play dead. Hopefully, it’ll go away.” Hopefully? He hasn’t belayed my fears. Not by a long shot. I thought about the canister of bear spray hanging from the carabiner on my backpack and wondered if industrial strength pepper spray was really going to stop a massive grizzly. Relax, I tell myself. The odds of a bear encounter, let alone an attack is infinitesimal. I did my research; 400,000 people visit the park each year and there has only been one reported grizzly attack that has led to a human death in the history of the park. What I (thankfully) didn’t know was that from May 30 until September 18, 2015, there were over 60 bear and human interactions documented at the park. Still, that’s exactly why I’m here. I don’t want to sit in the safety of my office and write about grizzly bears for the rest of my life; I want to be out in the wild interacting with them (or if I’m a little more honest, spotting them from a safe distance). It’s my turn to smile because, despite the risks, this is going to be an amazing experience. Isn’t that why most of us travel to Denali National Park? We want to see the amazing wildlife. And in particular, we want to see the big five mammals of Denali National Park: • Grizzly bears • Wolves • Moose • Caribou • Dall sheep Here’s a bit about each: 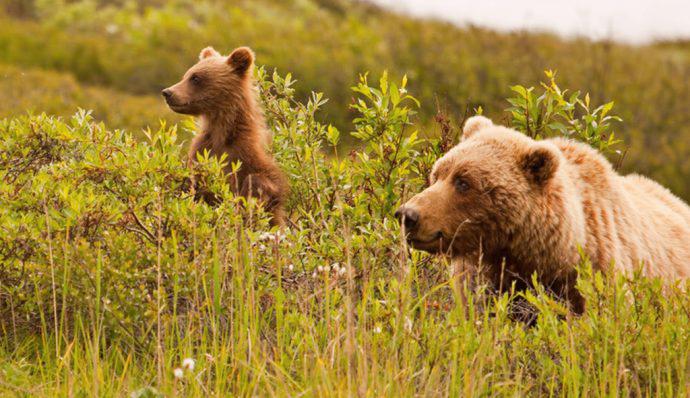 I’m happy to report that we saw seven grizzly bears during our expedition, all from the safety of the camper bus that took us 85 miles to the Wonder Lake Campground. The grizzlies in Denali tend to be smaller than the brown bears that reside near the coast, but they still weigh upward of 600 pounds. As far as their diet goes, there aren’t salmon in Denali, so that’s out. Thanks to their long claws, these grizzly bears tend to eat a lot of roots, bulbs, and tubers, along with berries and other fresh vegetation. They also eat prey like ground squirrels and sheep, as well as moose and caribou. Grizzlies are typically solitary, though it was a real treat to spot a female with her cubs. All of our sightings were grizzlies wandering across the tundra, but they can also be spotted near waterways like Toklat River, Teklanika River, and Savage River, as well as Wonder Lake. It’s also not unusual to spot them at higher elevations including Highway Pass, Sable Pass, and Thorofare Pass. 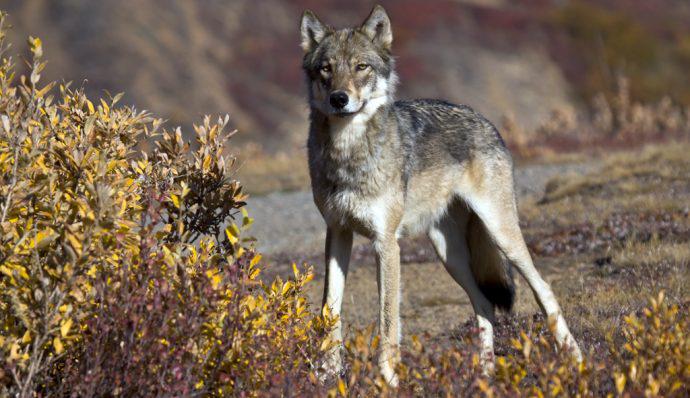 It may have started with Lon Chaney Jr.’s portrayal of the Wolf Man in the old Universal Studios movies. Or maybe it was our neighbors back in Waconia, Minnesota. Their dog was rumored to be half husky and half timber wolf, and as I remember, it was enormous. But whatever it was, I’ve had a fascination with wolves for as long as I can remember. We spent two nights at the Wonder Lake Campground, where a park ranger told us that two wolf packs live in a stretch of forest that’s little more than a 2-mile hike from our tents. We’d hoped to spot some—or at least hear them howl—but our only interaction was finding some tracks next to a creek that crossed the McKinley Bar Trail. National Park Service staff estimates that in 2010 upwards of 40 percent of all visitors viewed a wolf. Unfortunately, the wolf population at Denali National Park has dropped and now they estimate that only around 4 percent of visitors get to see one. Historically wolves that get spotted have come from packs that den near the road where the buses travel. Those wolves can be seen wandering along gravel bars. They’ve also been spotted near Savage River, Last Fork River, and Teklanika River, as well as between Thorofare Pass and Toklat. 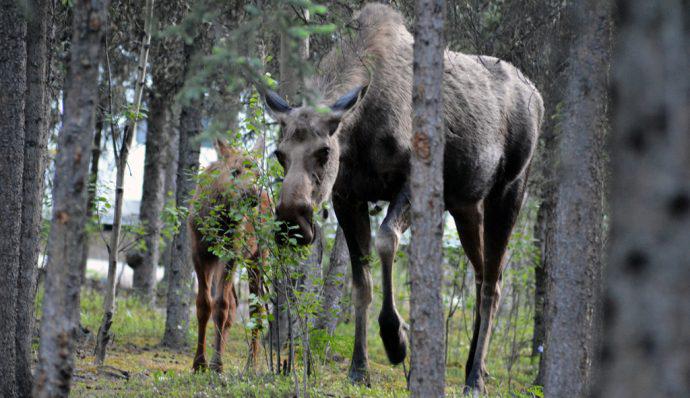 Growing up, I was taught a healthy respect for moose. In fact, my grandfather, who was an avid outdoorsman, told me that I should fear moose more than black bears—particularly during rutting (mating) season. They might not be naturally aggressive, but when they’re riled they can be a force to reckon with. A member of the deer family, a moose can range from 5-to-6 1/2-feet tall from hoof to shoulder. Females can weigh from 700-1,100 pounds. Males can reach a staggering 1,400 pounds, with antlers that span over 6 feet from tip to tip. The moose in Denali National Park tend to reside in forested areas near lakes and marshes and other bodies of water. They like to graze on grass, deciduous leaves, and coniferous needles, as well as underwater vegetation. You can find moose between the Riley Creek Campground and Savage River, and in the spring it’s not unusual to see calves with their mothers near the park entrance. When rutting season hits, you can find males between Mile 9 and Mile 13. 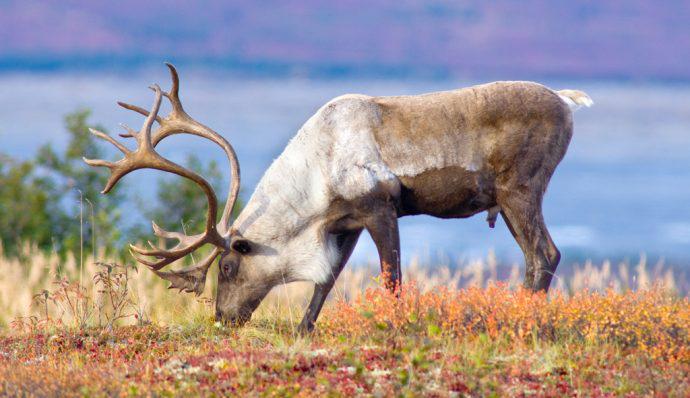 One of the most amazing experiences during our time at Denali National Park was watching a herd of more than 50 caribou run through a mountain pass toward the road. Our camper bus stopped so people could take pictures, and then, on the other side of the road, someone spotted a large male grizzly. It was as though his lunch was rushing right towards him (we weren’t around long enough to see if an encounter took place). A surprising fact about caribou is that during the summer both males and females have antlers. They have a tendency to stay in smaller groups during summer months. You’ll see some by themselves, and others will stick to groups of around six animals. However, on occasion herds during the summer can grow to 100 caribou or more. They like to stay in the tundra where they feed on lichens. In the winter months, they dig through the snow for food. Early during the summer, you can typically spot caribou east of the Savage River. Later in the summer, you can often see them wandering across the gravel bars west of Sable Pass. 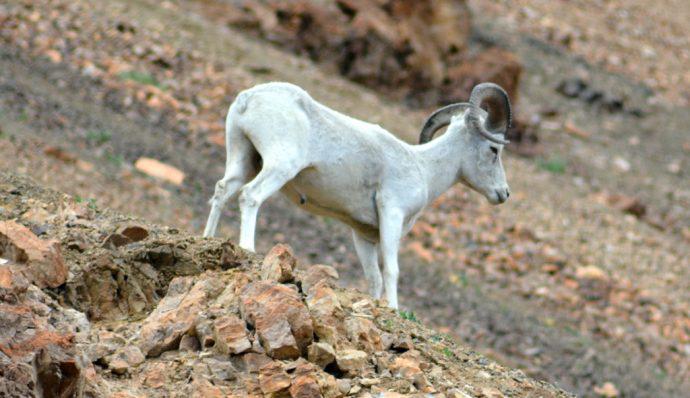 Dall sheep spend most of their time traipsing through the high mountains in the eastern and western-most areas of Denali National Park and Preserve. They tend to feed and rest along the slopes and ridges because it’s a great place to elude predators like grizzly bears and wolves. You can distinguish the rams (males) from the ewes (females) thanks to their signature curved horns. Adult males actually live in bands that rarely interact with ewes outside of their mating season, which occurs between November and December. And if you’re hoping to spot them battering into one another with those horns, that’s the time to do it as they vie for the right to mate. Some of the best places to spot Dall sheep include Igloo Canyon, Polychrome, and Eielson Visitor Center. Spotting the Big Five Mammals We were lucky enough to see four of the big five mammals during our time in Denali National Park. A mother moose and her calf walked right through our campsite at Riley Creek the first few hours we were there. The next day we saw grizzlies and caribou, and we spotted two Dall sheep rams on our last day. It was an extraordinary time that I’ll never forget. In a world where the suburbs continue to encroach on the wild places, it’s rare to see majestic animals like these outside of a zoo. * Population estimates were taken from the National Park Service website. More Wildlife in Denali National Park and Preserve For more about the wildlife in Denali National Park and Preserve, check out: