Explore Support Pages
Stream-side schooling? Read how some curriculum is ditching stuffy classrooms for lessons and learning completely outdoors. This is kindergarten redefined.

“Your home?" 3-year-old Aiden asks, looking nervously at the slippery slope between him and his friend. As he starts making his way down, he steps and then falls, but he doesn't cry. Instead, he slips and slides on his bottom down to the water, then gets up and steps confidently onto a rock in the middle of the stream to join Miko. They look at each other …1, 2, 3… and jump as high as they can from their rocky perch, laughing as they land and water splashes onto their faces. 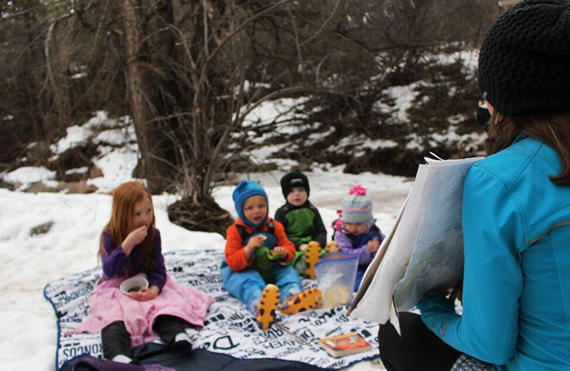 These are the students of a forest school, Worldmind Nature Immersion School in Boulder, Colorado, where the educational curriculum is based entirely outdoors and students spend every day, in every season, outside. Worldmind is among a growing number of forest schools across the United States. The movement began in this country 10 years ago when Cedarsong Nature School in Vashon Island, Washington, opened in 2006. "Our program is completely outdoors, 100 percent of the time no matter what the weather or what the season," says Erin Kenny, director of Cedarsong. “We have no indoor space so we are very, very diligent about how we clothe the children. The students are free to interact with nature in whatever way they choose, as long as they are following our safety rules and our rules of kindness." Cedarsong Nature Schools serves about 50 students ages 2 to 6, and uses a curriculum based on the original forest kindergartens, the “Waldkindergartens," that became popular in Germany and the United Kingdom in the 1950s. This model has no set agenda, schedule, workbooks or worksheets. Rather, it follows students interests and is inquiry-based, meaning that teachers pose questions and investigations for the students to answer and figure out instead of giving them facts to memorize. “We ask leading questions continuously so the children are probing their own mind and become really great at problem solving and divergent thinking," Kenny says.

At Cedarsong, educators aim to guide students in their learning as it arises organically and spontaneously. By promoting divergent thinking, which is the ability to see multiple possibilities or answers, the school is also promoting creativity, independent thinking, and conflict-resolution skills. The benefits of using an outdoor classroom are numerous. Research published in the Archives of Pediatrics and Adolescent Medicine states that "play, and particularly active, unstructured, outdoor play, needs to be restored in children's lives," as it has been gradually lessened in school systems and classrooms. This type of unstructured free play allows for healthy cognitive, social, emotional, and physical development in children by allowing them to socialize and work through conflicts together. Students also develop executive functioning skills like planning, organizing, and decision-making, all while decreasing stress, according to the research. 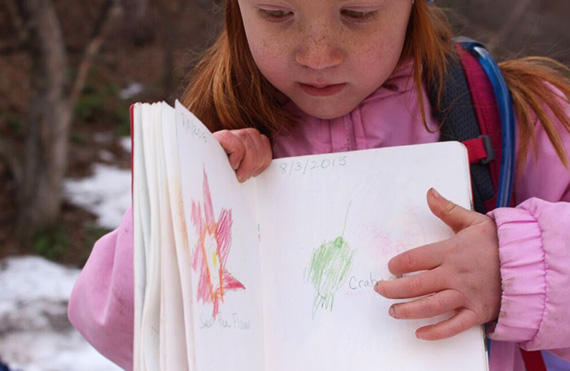 Forest schools aim to teach children self-awareness, self-regulation, intrinsic motivation, empathy, communication skills, and independence, according to Forest Schools Education, Ltd., a nonprofit teacher training organization. Research from the journal of Development and Psychopathology shows that learning these skills early on has a higher correlation to future educational success than academic skills. Soon after Miko and Aiden take their gentle plunge, one of their teachers rings a chime, signaling to the children to end their initial exploring and gather on a blanket. They have a morning meeting and listen to a book about the native black bear. Then the day continues with a hike to find animal tracks in the muddy trail. “I've seen Miko's personal growth in her perseverance, stamina, and problem-solving," says Miko's mother, Heather Bowler, the former director of a child care center in Chicago. Miko has attended Worldmind since it opened in the fall of 2015. “The freedom that it gives the children's interactions is what I like best. I've been in enough situations in education where children are confined in an indoor space and they don't have the freedom to figure things out for themselves." Megan Patterson, the founder of Worldmind, has also noticed improvements in her student's social and emotional skills. She credits the natural environment for encouraging free interactions among students and providing endless problem-solving opportunities. “At the start of the school year, we helped guide them through those conflict-resolution skills," she says. "Now, with some of the older students, they can do it themselves. They are resolving conflicts together." 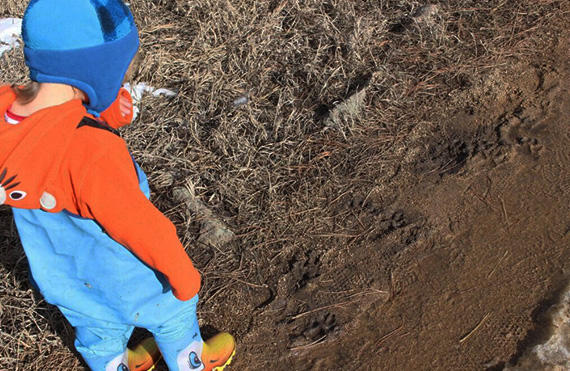 At Worldmind, which has three locations on public land in Denver, Morrison, and Boulder, Colorado, students engage in awareness activities like breathing and yoga, regular meetings to discuss observations about the outdoors like the changing colors of leaves, science projects to promote ecological literacy, and nature journaling. There is aways ample time for playing, hiking, and exploration. Textbooks are noticeably absent.

Worldmind also teaches best practices for risk-taking, like understanding the importance of "ice checks" before stepping onto frozen lakes or streams, and using large handholds while climbing. The students learn about empathy through how to appropriately treat plants and animals, and trail etiquette, like letting other hikers pass.

While out on the class hike, which followed story time, Miko stops excitedly. “Look what I found!" she says, pointing to tracks in the dirt. “What do you think made those tracks?" Patterson asks. “Maybe a bear. Or a dog." “We do have lots of bears around here. Dogs, too," Patterson says. "This print here, though, do you see how it has four toes and not five? That means it's a dog." Miko looks at the paw print thoughtfully, perhaps picturing the dog that it came from or maybe really hoping that it was from a bear, like in the story they'd heard. She looks back at Patterson, nods, and promptly scurries up the trail to discover more in her never-ending classroom.