When mountain biking is a major part of your life, you can't let one spill stop the thrill. Join one rider on his pedal back to confidence.

The chain on my bike was petrified. Bright orange with oxidation, and stiff as a steel beam, it served as a harsh reminder of my own procrastination. I'd pulled the mountain bike out for particularly nasty commutes during the winter months promising myself that I'd clean and lube the drivetrain the moment I got home. But arriving to an un-heated garage in a howling wind after dark quickly led to aborted plans. The road salt, freeze-and-thawed slush, and other unspeakable goop on the roads were now calcified. The annual spring tuneup was a chance to re-acquaint myself with the bike. And after the previous season, we were in need of counseling. That fall I'd been lucky. Lucky to escape without broken bones. Lucky to have been wearing a helmet. Lucky to have smacked that rock on my lid instead of a few inches lower in my ear. The scar on my arm was still clear, as was the memory of a corner that had nearly ended my season—or worse. 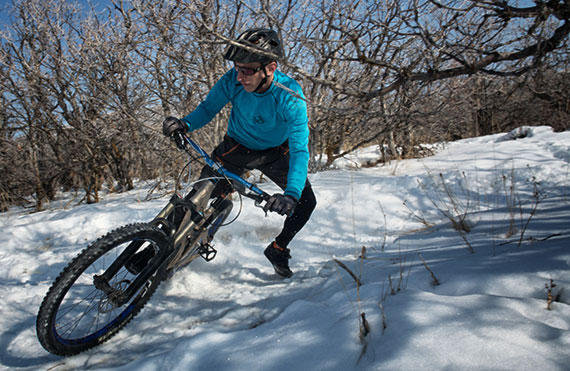 It shouldn't have happened, not there anyway—the banked turn was in between obstacles, not one of them. The trails in Park City, Utah, were unlike anything I'd ridden before; grooved tracks down the mountain with perfectly spaced jumps, a few wood ramps and berms that rewarded speed and commitment. I was riding an unremarkable turn when suddenly the bike was gone from beneath me and I shot out of some kind of invisible physics trebuchet. I landed face-first in a pile of rocks. I was intensely aware of the left side of my helmet hitting a basketball-sized rock and was pleasantly surprised to feel the foam compress and absorb the blow. The pain in my right side however, which had been relieved of much of its skin, quickly erased any of that pleasure. Eventually, my skin healed and thankfully my head was no worse for the wear—more than I could say for my helmet. But the psychological wound festered.

As the snow started to fall I played the crash over in my mind while running along icy trails through mid-winter flurries and sitting on stalled chairlifts. It occurred to me as I skied through aspen stands, wondering what would happen if I caught an edge with my ski and a tree with my head. Not a thought I'd seriously entertained on the mountain before. Was it a loss of concentration? An unseen patch of gravel? Some setup error like low tire pressure that caused the bike to behave oddly? 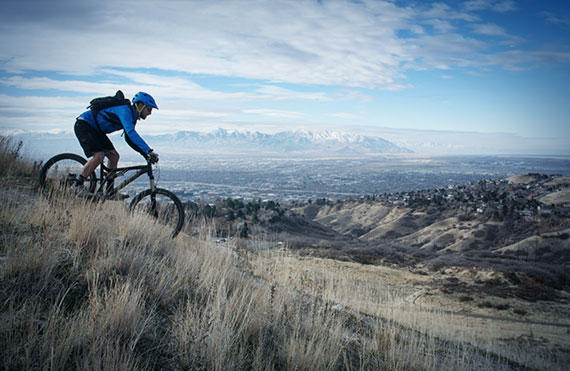 Eventually, the cold, dark days began to give way to spring and low-elevation trails began to thaw. The first real ride of the season was getting closer by the day and I started to obsess about the turn. Revenge against the dirt? Maybe. But first there was the not-so-small matter of making sure my bike could spin a pedal at all. I tuned the bike up enough to limp through an early-season outing full of grinding shifts and muttered profanity. I headed straight for the trail I'd been thinking about all winter long — you've got to get back on the horse sometime, right? I was anxious at the trailhead but quickly consumed by the effort and enjoyment of feeling tires back on dirt. Soon the sought-after flow, that clear-minded rhythm that comes so easily in the dog days of late summer, replaced any lingering fear. The trail blurred past and thoughts of the turn—thoughts of anything, really—went silent in service of the pure reaction needed to ride or ski or run fast over natural terrain. With a quiet mind, and a healthy dose of spring sunshine, my anticipated scan for the exact rock that had done me in turned into a sort of concentration that left me zooming through the runout like I was coming out of a trance. Where I'd expected fear—and maybe a little revenge—had been, well, nothing at all. Just the simple pleasure of wind in my ears and a grin plastered on my face. I'd ridden the entire trail without having recognized the spot I thought I couldn't forget.