Explore Support Pages
Our most important decisions are made on the hill.” – Jake Burton

What if your job entailed 100 days on the slopes with trips to the most exotic ski and snowboard destinations all in the name of ‘research’? It started on the hills of Bromley Mountain, Vermont for Jake Burton Carpenter, born in New York, NY. He stared down the slopes of Bromley Mountain at the age of 6 and a little piece of him stayed there ever since. His obsession with powder led to him getting a Snurfer for Christmas and thus started his passion for boards. 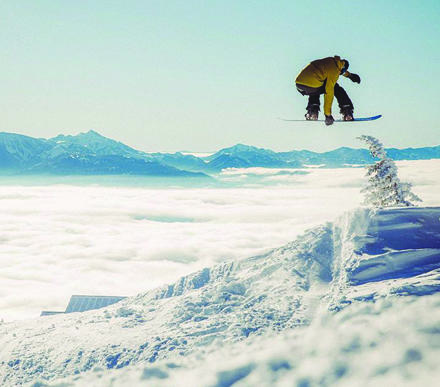 It only took Jake 9 years from getting his first ‘snowboard’ until he opened up shop in his barn located in southern Vermont. Burton Snowboards was born when he decided that his middle name was better suited for the company than his last. That started Jake on his biggest run yet, and he’s redefined the state of snowboarding ever since. The day after opening up shop, Jake developed 100 prototypes that led to his first board, and he called it the Burton Backhill. It was “a narrow board with single strap bindings and a rope attached to the nose.” Though few would call it revolutionary, it was the kindling that sparked his creativity for decades to come. Jake was the kind of guy who wanted to make sure the work was done the right way, so he made them all himself. And he nearly killed himself in the process. Twice!1 It didn’t take long for people to notice. After selling only 300 snowboards in 1979, Burton Snowboards saw a 133% sale increase the following year. Still, it wasn’t always a smooth ride for Jake. He worked as a bartender and tennis coach on the side to keep the company afloat. As Jake signed on more riders revenues increased, and the Burton name spread in every competition Jake participated in, with the company finally being recognized as a force dedicated to redefining the sport of snowboarding. Jake knew that he had made it, but the best was yet to come. He met his wife-to-be, Donna, at the Mill Tavern in Londonderry. “Buying her a drink was the best idea I ever had,” Burton says as he reminiscences on the first time they met. A drink turned into a kiss, and a kiss turned into, “I do.” Jake and Donna married on May 21, 1983, even though Donna’s mom didn’t approve of Jake’s uncombed hair and demeanor (neither of which have changed to this day). It became a family ordeal for Burton Snowboards and it’s stayed that way since, as Jake’s wife and three sons all serve in a variety of capacities for the company. Other relatives have joined in on the fun (err…work). With all hands on deck, the company's influence has spread with sport and Jake has been the catalyst for both. Even at 61, Jake still feels like “it’s more important that [he’s] on the snow. A lot. To stay connected to the scene as much as [he] possibly can.” And it hasn’t been easy. Jake battled testicular cancer in 2011, being cured of it in 2012. "It appears my cancer is toast," Jake said.2 And Jake continues seeing the good in his situation. He’s grateful for the state of the company and all the time he gets to spend on the slopes. It’s been 38 years since Jake started Burton Snowboards and we’re looking forward to the next 38 years of innovation, partnerships, and inevitable shred sessions between the GORE-TEX Brand and Burton. We’ve developed some of our favorite gear with Burton, like all of this…