Explore Support Pages
The rain was coming down much harder now, stinging our faces like the pinprick of a needle. 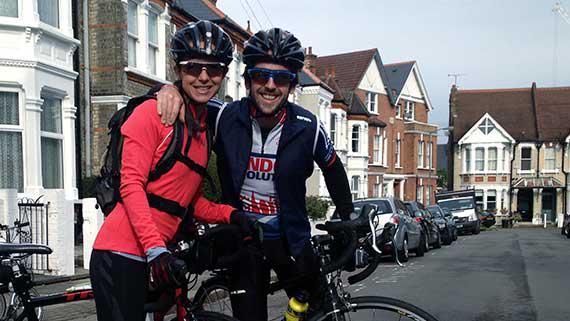 I clenched each of my hands into a fist in a futile hope of squeezing out the water — not the best idea when cycling into a headwind while sharing the road with hundreds of enormous, noisy trucks that passed us at alarming speeds on their way to Dover, splashing us with road spray each time. Peering through the torrential downpour, I could just make out the hunched over silhouette of my wife, pedaling as hard as she could, but seemingly going nowhere. "This would be a really bad place to have another puncture," I worried, hoping that she was okay. We were both drenched to the bone, but the only way to keep our core body temperature up was to simply keep moving. A few moments later, she came to a stop and looked at me with one of those expressions she saves for only the most serious moments. "I've got another flat," she muttered, staring at her back wheel, which now looked pathetically deflated — much in the same way we were. This was not the sunny weekend cycling adventure we had in mind. And at this rate, with the miserable rain and ferocious winds doing their best to thwart our plans, we were not only in danger of missing our ferry to France but ultimately, not even making it to Brussels. Like most of our adventure ideas, this one began on a summer's evening in the pub, when we decided on the spur of the moment to cycle from London to Brussels. With a glass of wine in one hand and an iPhone in the other, I Googled the route, which was about 250 miles long. We decided to split the trip into two days — we planned to book a ferry and secure a hotel in Calais for Friday night and another in Brussels for Saturday night. We'd then return, fingers crossed, to London by Eurostar the following day. "Easy," we said. "What could possibly go wrong?" We reminded ourselves that the whole point of an adventure is that the outcome is unknown.

We reminded ourselves that the whole point of an adventure is that the outcome is unknown."

When will we learn? Our first mistake was failing to look at the weather forecast. Had we known the southeast of England was about to be hit by one of the worst storms of the year, we might have stayed home. Ironically, when we'd set off that morning, the skies were clear, and the sun was out. The second mistake was not reading the instruction manual of our borrowed Garmin GPS in advance or at the very least, packing a spare map. The third was not bringing a sufficient number of spare bicycle inner tubes. Forty-five minutes into our journey, having abandoned any hope of understanding how the GPS worked, we'd already had our first puncture. Perhaps the most disastrous decision, we hadn't determined how to leave London by bicycle. By car, it's very easy—there are plenty of signs and a three-lane motorway leading to the ferry port. But there are no signs for cyclists, which is why a GPS comes in handy...if you can figure out how to use it. Despite warnings from fellow cyclists, we were advised to avoid taking the A2 out of the city - great for cars in a hurry, but rubbish for cyclists looking for a traffic-free, scenic route. "What do you want to do?" I asked my wife, as we huddled underneath a nearby bridge on the A2, using our last remaining inner tube to fix her flat. In a few hours time, it would be dark. "I want to get to Brussels," she replied. "I don't care how we get there. Even if that means we have to catch a train to Dover." Which is exactly what we did, leaping on a train at Canterbury and arriving at the ferry port with minutes to spare. The next day, when we woke up in our hotel in Calais, the skies were once again clear. It was as though the torrential rain, the 100mph winds, the numerous punctures and the pathetic shelter we made of the bridge had all been a dream.

Later that night in Brussels, celebrating our victory in the only place still open — a seedy nightclub restaurant — we laughed at our initial misfortune. But then we reveled in it, reminding ourselves that the thing that makes adventure so great is that you can't predict the way things will ultimately unfold. Two punctures, a faulty GPS, no more spare inners, and the general soaking we took—it all makes for a better story. Moreover, we learned an important lesson. That when the going got tough, it would have been all too easy for us to call it a day. But, to quote the American football coach Vince Lombardi, "It's not whether you get knocked down, it's whether you get back up." He might not have had our drenching bike ride in mind, but I think the point holds.