Explore Support Pages
Make sure to keep your eyes on the sky the next time you visit Denali National Park.

My tent is finally pitched but before I can take the sleeping pad out of my backpack, I stop. My eyes are drawn to the horizon where Denali stands brilliant white against a surreal blue sky. It’s so captivating that it looks like someone has maxed out the saturation levels of an Instagram photo. I’ve never seen anything like it. 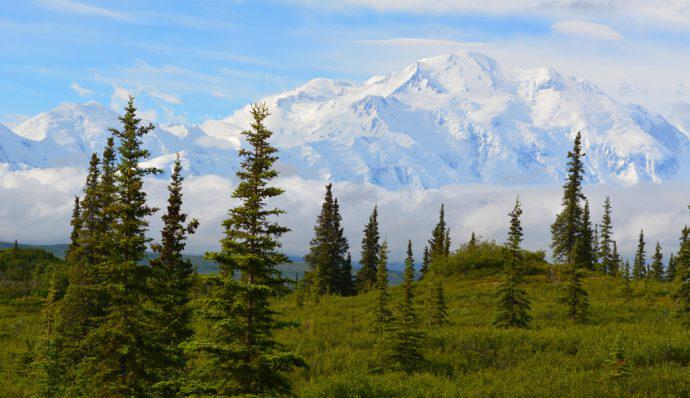 I forget about the sleeping pad and grab my camera instead. I feel compelled to take a series of photos that I know I’ve already taken at least twice in the last hour. It doesn’t matter, though. It’s too beautiful not to capture. I’m not sure how long I stand there, but eventually, I lower my camera and gaze at Denali without the barrier of a lens. I savor the moment and can’t help but wonder if I’ll ever see a landscape this beautiful again. As I turn to put my camera away I catch a dark shape in the sky. My heart rate jumps as it darts to a nearby tree and as I take a step back, I nearly trip over my backpack as my brain tries to register what my eyes are seeing. I’m a bit on edge since the park ranger told me that two wolf packs roam a nearby forest. It doesn’t make sense, of course. Wolves don’t fly and they certainly aren’t as small as whatever it is I saw, but that’s the thing about fear. It’s not logical. I regain my balance and then smile when I see a gray jay looking down at me. It’s bigger than I expected and one thing is immediately obvious. It’s not the least bit afraid of me. Gray jays are a species of bird that have earned the nickname “camp robber” because they have a habit of stealing people’s food. This one seems to be interested in some packets of banana nut oatmeal on the ground near my pack. I watch as it jumps from branch to branch, cocking its head as though it’s studying me. I convince myself that it’s waiting for me to make a mistake so it can swoop in and grab a free meal, but I have no idea how it’s going to open the oatmeal packets if it succeeds. I’m tempted to give it one of the packets to see what the winged thief would do with it, but instead, I just stand there and watch him. In time, it realizes that I’m not going anywhere, so it flitters off to another campsite in search of an easier meal. My oatmeal finally safe, I turn my attention back to Denali and wonder if I should take more photos before the clouds set in and obscure the view. Yet I keep a wary eye on the woods where the wolves frolic and hunt, hoping I can see one but concerned it might want to steal some banana nut oatmeal as well. Like most people, I came to Denali National Park and Preserve because I wanted to see the big five mammals: grizzly bears, wolves, moose, caribou, and Dall sheep. But there are over 150 species of birds in the park (like the gray jay), and they’re a lot of fun to watch as well. Here are ten of my favorite birds to look for in Denali: 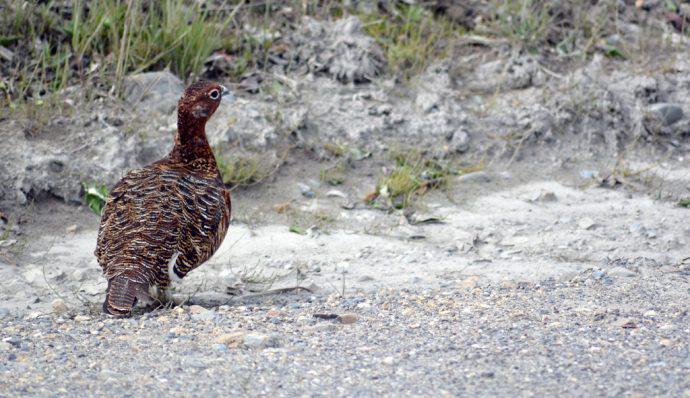 Willow Ptarmigan Alaska’s state bird, the willow ptarmigan, lives in Denali National Park and Preserve all year-round. They are members of the grouse family and though they are capable fliers, they spend most of their lives on the ground. You can see them all over the park, however, they typically aren’t found at the higher elevations. During the winter the willow ptarmigan live in flocks. They will blend in with their surroundings by changing the color of their plumage to white so they blend in with the snow, and their feathered feet help them walk on the snow’s surface. Willow ptarmigan can be noisy, particularly in the spring where you might hear them cackling and even growling. They can be extremely territorial and male willow ptarmigan will defend their territories against other males. Their natural predators include golden eagles as well as gyrfalcons. 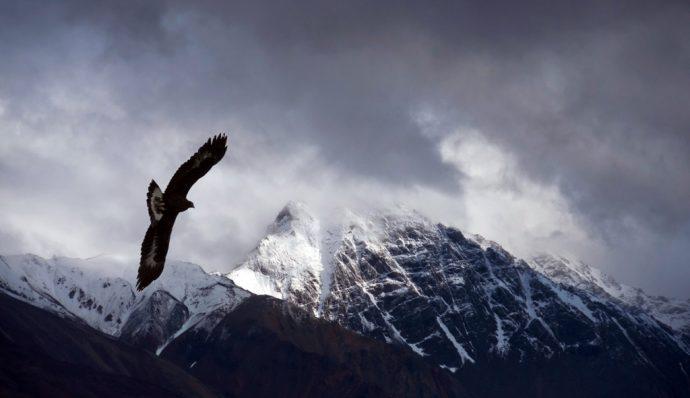 Golden Eagle Most people think of bald eagles when they think about Alaska, but Denali National Park and Preserve is better known for its golden eagles—especially north of the Alaska Range. With a wingspan of nearly six feet, visitors to the park can see them soaring high overhead, though if you’re lucky you may see one perched in a nearby tree. Golden eagles primarily stick to mountainous regions of the park where they hunt in areas with light vegetation and few trees. Their diet includes ground squirrels, marmots, and ptarmigan. 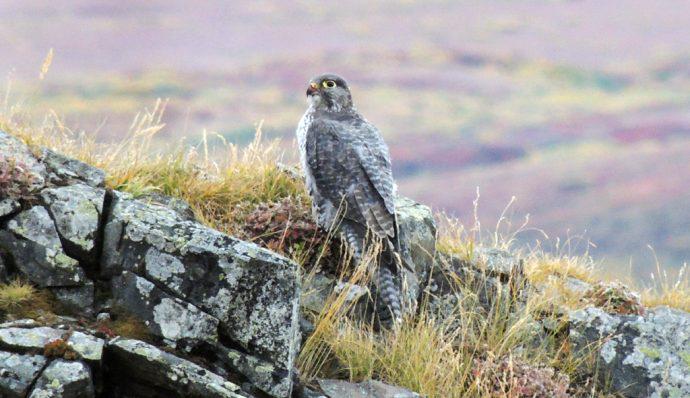 Gyrfalcon The largest falcons in the world, gyrfalcons live in Denali National Park and Preserve all year-round. They are powerful and elusive and most often feed on ptarmigan, ground squirrels, and snowshoe hare. Gyrfalcons lay their eggs in the abandoned nests of other raptors. Due to the close proximity of the two breeds, on rare occasion visitors to the park may see an aerial dogfight between a gyrfalcon and a golden eagle. 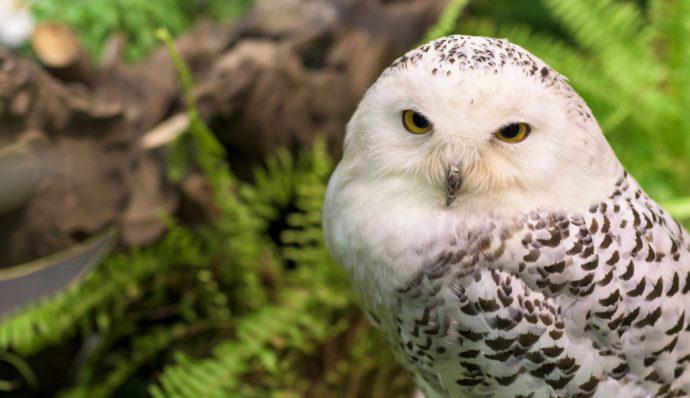 Snowy Owl Snowy owls are best known for the white plumage that helps to make them formidable predators in the Arctic tundra. They will turn whiter as they grow older, though female snowy owls tend to be darker than males. With keen eyesight and acute hearing, they are able to find prey in both the thick vegetation and beneath the cover of snow. They tend to feed on rabbits, ground squirrels, mice, and lemmings. 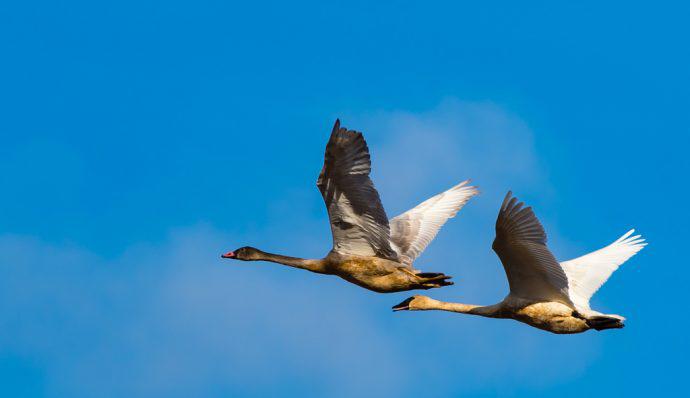 Trumpeter Swan The trumpeter swan was on the brink of extinction when in 1932 biologists only found 69 of the majestic birds in the contiguous United States. Now there are estimates that the population ranges from 16,000 to 24,000 birds. It’s fairly common to see trumpeter swans flying across the skies of Denali National Park and Preserve during the spring and fall months. Visitors can also find them in the parks wetlands during the summer. 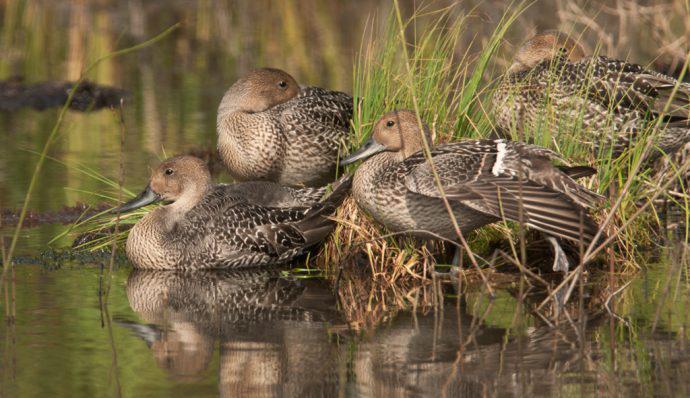 Northern Pintail Duck With its slender neck and long central tail feathers, the Northern Pintail strikes a distinctive silhouette. Both males and females have bills and legs that undulate from blue to gray, though the male is distinctive due to the white stripe from its head to its undercarriage. 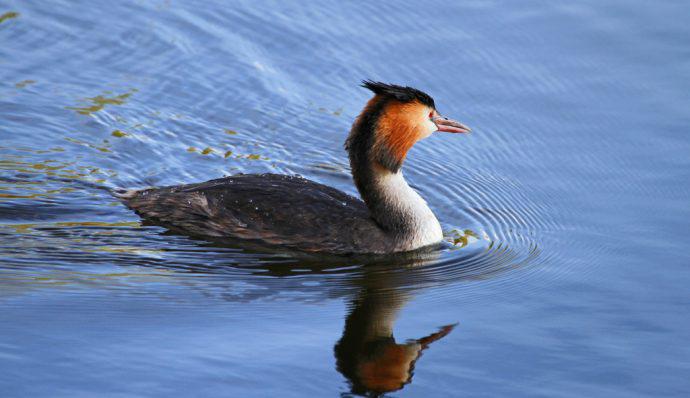 Horned Grebe Though most are familiar with the horned grebe’s black and white winter plumage, it’s the brilliant red breeding feathers that truly stand out. And despite their name, horned grebes don’t actually have horns, though at first glance it looks like they might. The horns are actually yellow feathers that jut up from behind their eyes. This grebe is all decked out in its red and black breeding outfit. If you watch closely you might spot chicks on the back of an adult grebe as it glides across the water’s surface. In fact, they are known to stay on their backs even when the adult dives under water. 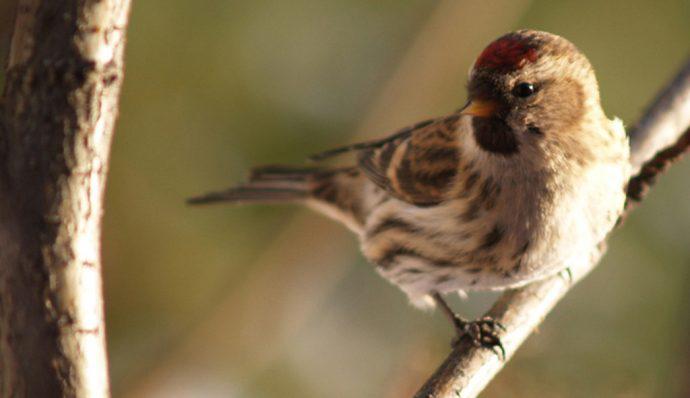 Common Redpoll Though the common redpoll is often mistaken for a sparrow, it is actually a finch. It is an active forager that travels in large flocks. One interesting fact about the common redpoll is that it stores its food in a pouch inside its throat, where it then eats from later in the day. 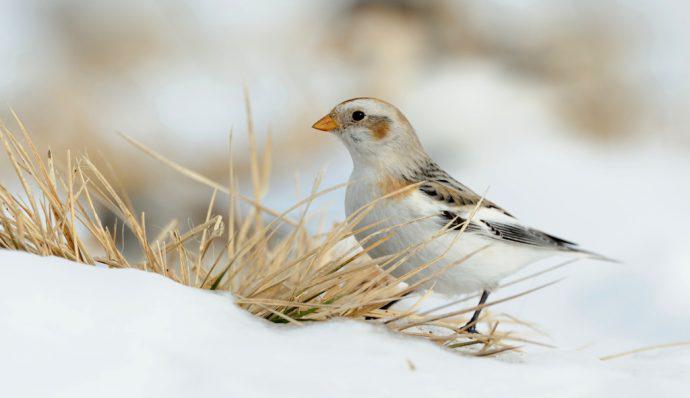 Snow Bunting A small songbird, the snow bunting is also known as a snowflake. They can be seen along the park’s roadside in March and April and are noted by their white plumage touched by gray and black along their wings. Their song tends to be a low warble that can include a rolling rattle and a buzzing sound.

Gray Jay Gray jays like to hop about campsites where they look for handouts, as well as an opportunity to steal your food. Unlike jays in the “Lower 48” states, this particular jay has no crest. They store food by attaching it to trees with their saliva. More Wildlife in Denali National Park and Preserve For more about the wildlife in Denali National Park and Preserve, check out: