“Stop the bus!” I brace my arms against the seat in front of me just before the driver hits the brakes. My head snaps back and then forward as tires crunch over gravel and dust billows outside. The cloud obscures my view as the other passengers jump up and rush to the front of the bus. 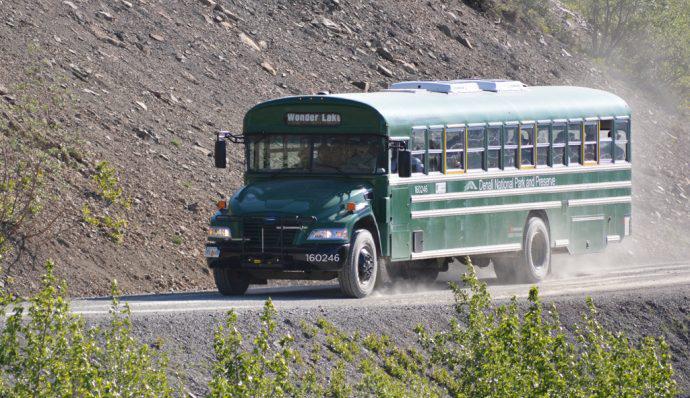 “What is it?” I ask, figuring there was a grizzly on the road as the guy next to me pushes his way forward with the rest of the throng. “A lynx!” The last time someone had asked the driver to stop it was because he wanted to take pictures of a grouse. I didn’t even bother picking up my camera. A grouse wasn’t worth draining the battery of my Nikon D7100. But a lynx? Now that was worthy of a series of photographs. When I was 14 I wanted to be a comic book writer and illustrator (they call them pencilers), and I actually created a superhero called “Lynx". Okay, admittedly he was a derivative of Beast from the Marvel’s Uncanny X-Men, but his alter ego was a park ranger, not a research scientist. His base of operations was even in Alaska, so in a way, this was a moment I’d been waiting for most of my life. I strain my neck, darting left and right but I can’t see beyond the sea of people in bright red, yellow, and blue jackets who are jostling for views of their own. I’m pretty sure if they knew I had created my own lynx superhero that they would have gotten out of my way, but I didn’t have time to explain the situation. Why can’t they read my mind? Apparently, the lynx was crossing the road from right to left, and I started to feel anxious. It’s not like the cat is going to stop and pose for pictures—not unless it has an Instagram account and it’s looking for more followers—so if I don’t hurry I’m not going to get my shot. “Did you see it?” someone calls out, though apparently to no one in particular because he’s just standing there smiling as he looks out the window. “It’s going behind those trees.” That’s when I see a hind leg. That’s it. One hind leg. The lynx darted into the thickets and disappeared, leaving me more than a little frustrated. Or maybe I was just disappointed. Either way, as far as I’m concerned seeing a hind leg doesn’t count. OK, so most people don’t come to Denali National Park to see a lynx. They want to catch a glimpse of the big five mammals. Don’t get me wrong, seeing a grizzly bear roam across the tundra is something to behold. But here are 10 other amazing mammals that you’ll find in the park if you have a keen eye, know where to look, and catch a bit of luck. 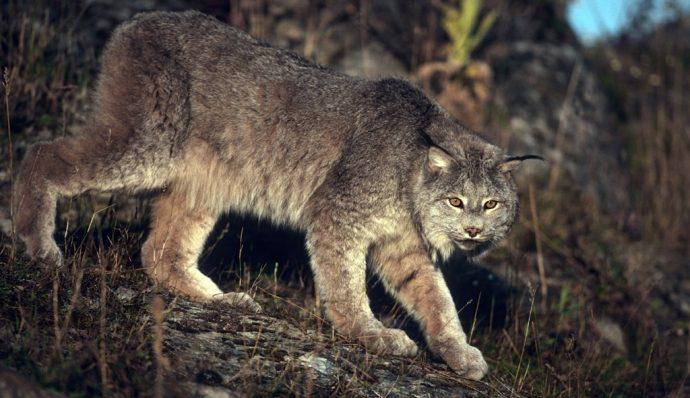 Lynx Lynx have an unmistakable silhouette with pointed ears that end in sprouting tufts of hair, long legs, and large padded feet that make the perfect natural snowshoe. Males are larger than the females, standing up to 28 inches at the shoulder and weighing up to 30 pounds. Generally found in mature forests where they prefer the cover of thickets, in times of hunger lynx will venture into the tundra in search of food. They are primarily nocturnal, solitary hunters that only travel in pairs during the spring mating season. Lynx stay active during the winter, though they bed in the snow and take advantage of the insulation during harsh weather. 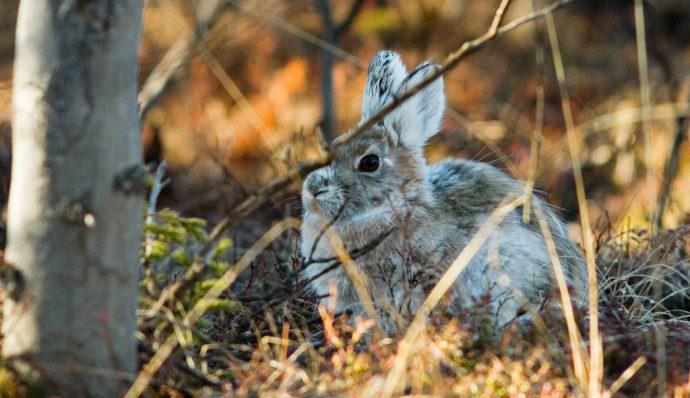 Snowshoe Hare Snowshoe hares get their name from their large hind feet, which resemble snowshoes. In Denali National Park and Preserve, they tend to live in spruce forests and places where they can hide beneath the cover of the shrubs. They will aggressively defend their home range against other hares by growling and kicking with their hind feet. To combat predators like the lynx, red fox, and golden eagles, snowshoe hare will use their keen sense of hearing as well as their ability to change the color of their coats. Their fur is brown in the summer and white in the winter, giving them the perfect camouflage for their surroundings. Snowshoe hares are nocturnal. During the summer, they eat herbaceous plants and new growth from woody vegetation. In the winter months, they eat buds, bark, and twigs. 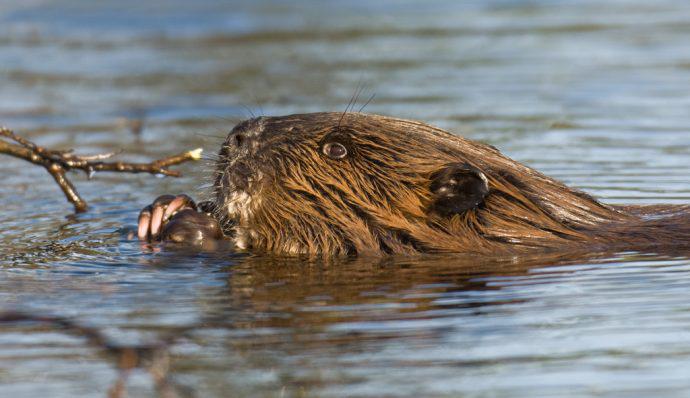 Beaver Thanks to their ability to cut down trees beavers can create a shift in topography, that modifies the movement and distribution of water. When they build a dam across a stream, it holds back the water and creates a pond. Those ponds become home to fish and waterfowl alike. Beavers live in a lodge, which can often be found in the middle of a pond, as well as the shoreline of a lake. They can even be spotted along riverbanks. Some of the best places to spot beaver at Denali National Park and Preserve are in the streams and ponds between Eielson Visitor Center and Wonder Lake, Moose, and at Horseshoe Lake. 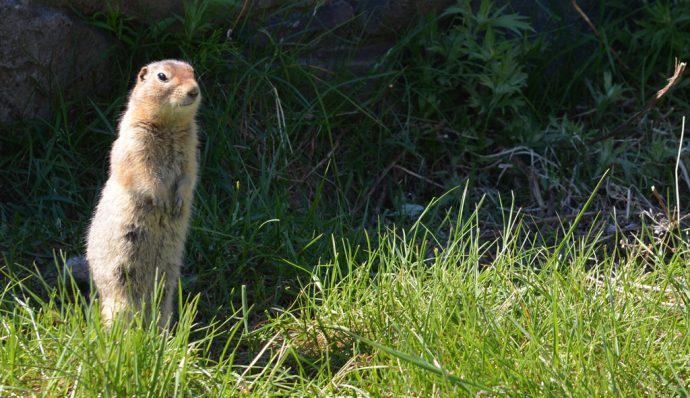 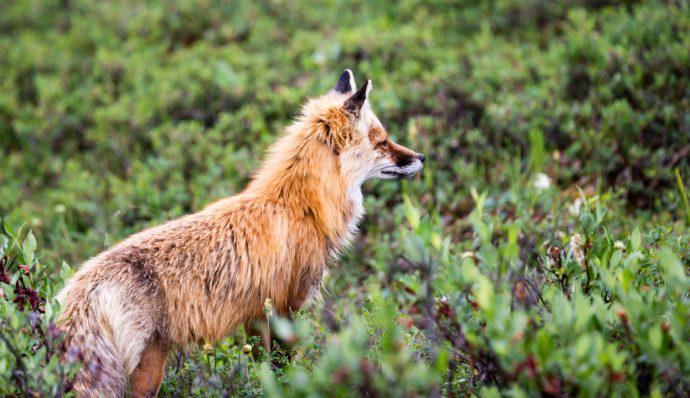 Red Fox Though the most common color associated with the red fox is red, there are other color phases that can occur in the same litter, including black and silver. However, the prominent white tip of their tails distinguishes them all. Red foxes feed on prey like arctic ground squirrels, mice, and hares. They also eat berries. They are helped in the hunt by their keen eyesight, enhanced hearing, and a strong sense of smell. They use underground dens to raise their pups, which can be found in a variety of terrains from open areas to forests. Most dens burrow into the soil and often have several entrances. 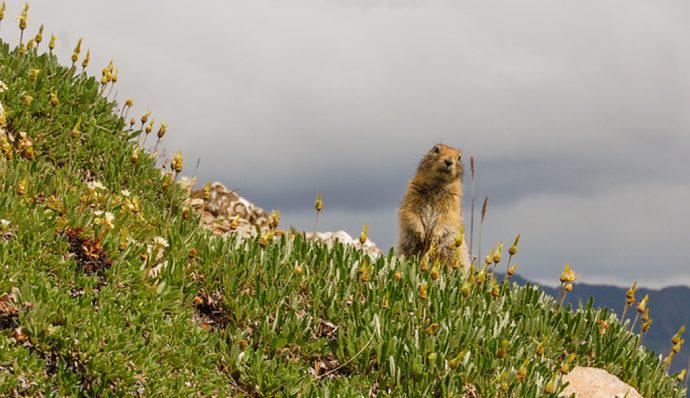 Hoary Marmot Hoary marmots are social mammals that live in colonies made of separate burrows. The colony has multiple entrances and exits and during the winter they plug them all up and hibernate. Averaging 28 inches in length and 19 pounds, when predators are spotted, hoary marmots let out a loud shrill cry. They feed on flowering plants, grasses, roots, berries, lichen, and moss. 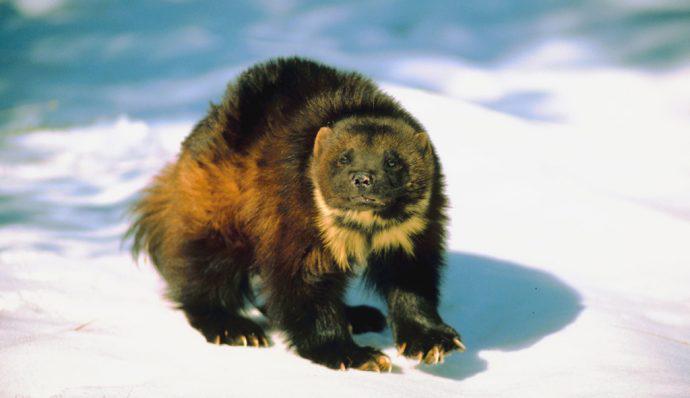 Wolverine Part of the mustelidae family, wolverines are related to mink, weasels, otters, and marten. Though at times mistake for small bears, they have the short legs and ears that are typical of other mustelids. Wolverines are scavengers that are strong enough to tear frozen flesh from bone. They are as tenacious as they are strong and will eat just about anything they can kill, including caribou and moose. However, it is more common for wolverines to scavenge carcasses than it is for them to kill their own prey. Denali does not have a high density of wolverines inside the park. They are territorial and tend to have a large range where they search for food. 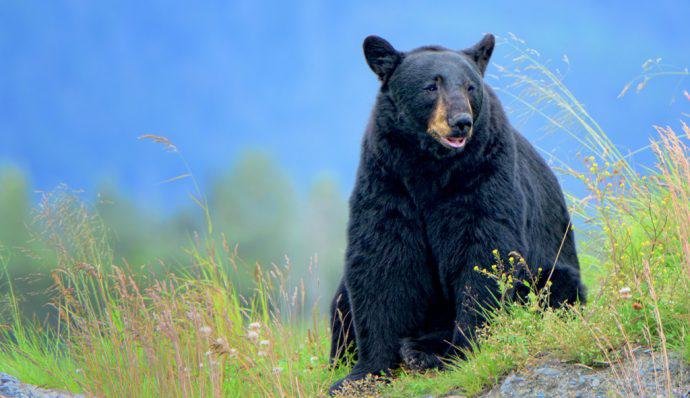 Black Bear Most black bears in Denali National Park and Preserve can be found in forested areas near Kantishna Hills and the south side of the Alaska Range. Ranging from 4 to 7 feet long and between 150 to 300 pounds, black bears are typically smaller than the grizzly bears that roam the park. Beyond their coat and size, you can also tell black bears from grizzlies because black bears don’t have the prominent shoulder hump found on grizzlies. Black bears are omnivores, which means that they eat both vegetation and meat. They are typically solitary animals, though you will see females with their young. However, when food is abundant you may see several bears feeding closely together, though they will likely have very little interaction. 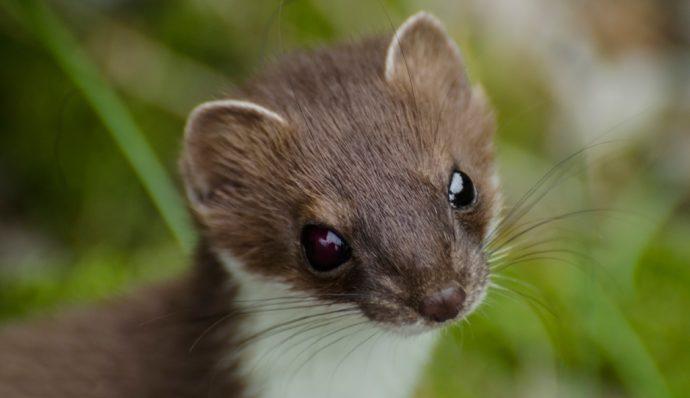 Ermine or Weasel With long bodies and short legs, weasels are known as ermines when their coat turns white in the winter. They play an important role in nature by helping to keep the rodent population under control. In fact, the weasel or ermine population is largely tied to the population of rodents. They hunt both in daylight hours as well as at nighttime. 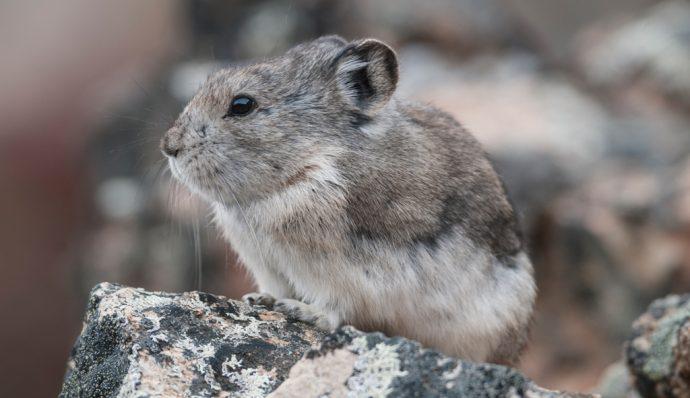 Collared Pika The collared pika is also known as "rock rabbit" because it is often found on top of a rock or a boulder. A member of the hare family, it has ears that resemble a mouse. Because they don’t hibernate, collared pikas build food caches called "haystacks" with leaves and twigs, which they guard against other collared pikas. More Wildlife in Denali National Park and Preserve For more about the wildlife in Denali National Park and Preserve, check out: