Explore Support Pages
Having grown up in the shadow of Croagh Patrick, Patty Hodapp felt the pull to finally hike the mammoth. Join her as she crests the 2,500-foot peak to gain a new perspective on this quaint Irish community. 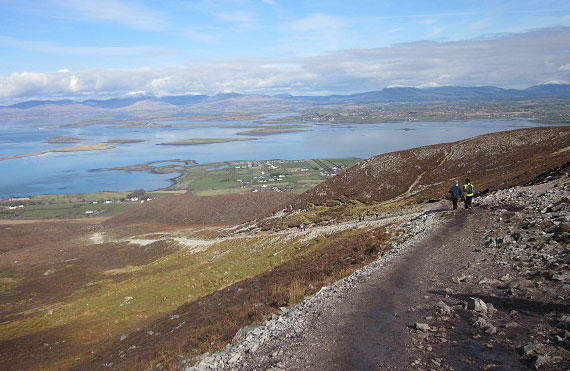 Dirty snow and chunks of mud nipped the skin under my fingernails as I scrambled up Croagh Patrick, a coastal mountain in western Ireland. Claw. Step. Claw. Step. All the while, the ocean wind whipped beads of sweat down my temples as I struggled. I couldn't be more than 100 feet from the summit when I slipped and faltered. Terrified, I fell forward into a low crouch, shredding my palms on the scree. One misstep to either side, and I'd tumble over the icy drop-offs, perishing long before I hit bottom. I cursed myself. A young Irish woman gingerly scooted past me on her butt and offered her right hand. "You're not too far from the top there now," she said. She pulled me upward until I found my balance, and then continued her awkward descent. How did I get here? For some, County Mayo's Croagh Patrick is a must-hike for its stunning panoramic views of the Atlantic Ocean and western Irish countryside. But to pilgrims and history buffs, it's much more. According to Catholic tradition, St. Patrick scaled the 2,507-foot mountain in 441 A.D. to banish all snakes from the Emerald Isle. Before that, the Celts worshiped a deity, Crom Dubh, they believed lived in the mountain. Those stories help to draw more than 100,000 people annually to hike the spiny ridge, traverse the saddle, and spring for the summit. And though I was neither an avid climber nor a history enthusiast, in 2011 I began to feel the mountain's pull. 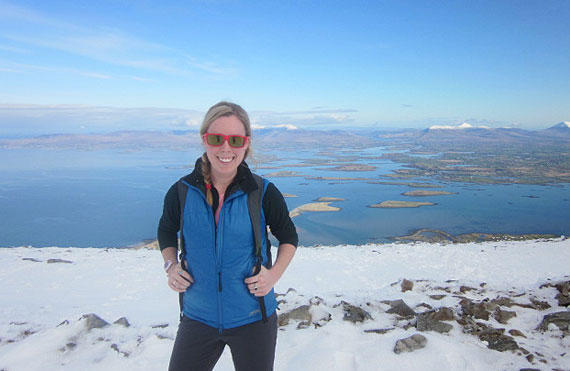 In many ways, a summit of Croagh Patrick would be a homecoming for me. The daughter of American academics teaching abroad, I spent years living in the shadow of the mountain—more specifically, in the hamlet of Louisburgh, a village of 207 and home to the College of St. Scholastica. And though I'd immersed myself in the local culture, I'd never ascended the famous peak. So when a globe trot brought me within a stone's throw of that familiar edifice, it seemed wrong not to attempt it. Of course, nostalgia is all well and good at sea level. Clinging to the side of Croagh Patrick, 2,400 up, I resumed my crawl. Claw. Step. Fifty feet to go. But the scree gave way and I slipped back ten feet and swore out loud. Forty feet. I thought of the granola I ate that morning and prayed I wouldn't vomit. Thirty. The sunlight made diamonds out of the snow. Did I overestimate myself? Should I have brought crampons? Sweat fogged up my sunglasses so I pushed them back through my blond braided hair.

The sunlight made diamonds out of the snow. Did I overestimate myself? Should I have brought crampons?"

Twenty. My contact lenses had dried out and stuck to my eyeballs. Ten. The brain does funny things when fatigued. I began to drift, fantasizing about sledding down the mountain, when the icy path suddenly leveled out. I crested the mountain into knee-deep snow. The pink stopwatch on my wrist read 2:23:17. I'd made it. Heart rate: 171. Total elevation: 2,507 feet. Blisters: too many to count. But I made it.

Two men in their 50's stood eating apples and digging circles in the snow with their walking sticks, not too far away. "Good girl," said one. “That'll get the heart racing now, won't it?" He jabbed at the west edge of the summit with his staff, and I followed his gaze off the coast. An army of islands (365, I found out later) dotted the waters of Clew Bay. Nestled between the mountain and the bay, the green countryside was dotted with white and yellow cottages, ribbons of cobblestone walls separating one farmer's land from another. I nodded to the men and waded through snow to the summit's small church, a shrine to the mountain's namesake. 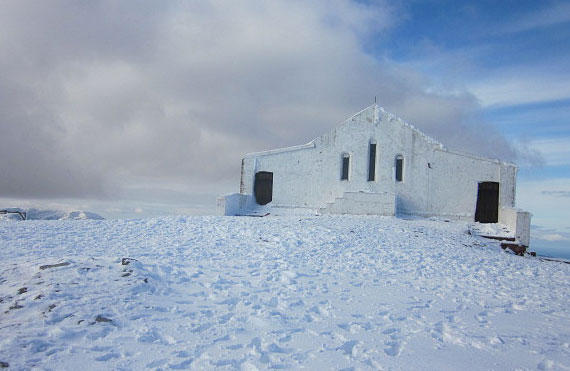 Munching a granola bar, I returned to those legends in which the peak was shrouded. Serpents and gods certainly lend an air of the mystical to Croagh Patrick, but they weren't what drew me to the summit. Rather it was the community the mountain had built, at its base and on its slopes—the strangers it drew together on the trail, the passing hellos, the strong grasp of a helping hand. It was my community, one I missed dearly, but had been lucky enough to find again. With an aching back, but a renewed spirit, I waded back through the snow, put my toe to the edge of the mountain and looked down at the tiny people steadily climbing toward me. I smiled to myself and began my descent, a pilgrim coming home.