From my hiking boots, to my trekking poles to the trail itself—I felt like I was perhaps side-skirting some of the toughest challenges that lay ahead. Yes, my boots were all laced up and my pack filled with water and lunch, but can you really consider it a hike if you get to the trail via helicopter? To be honest, it all sounded a little pretentious, a little too posh, but let's be real: I wasn't going to pass up the chance to sit shotgun in a helicopter as it soared above the peaks of British Columbia—even if it was a bit like taking the easy route. 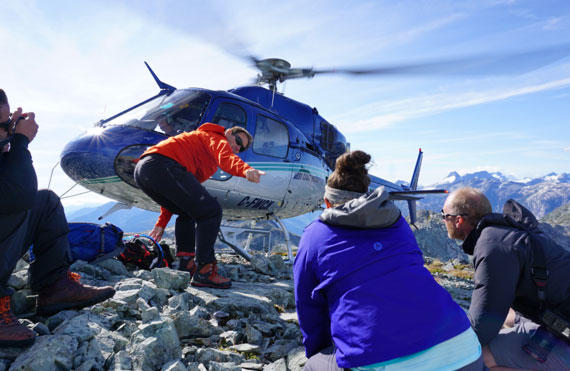 It was a motley crew that set up basecamp at BC Grizzly Tours in the Bella Coola Valley on the coast of British Columbia. There were 10 of us, hailing from all over the country, and many with much more travel experience and miles under their belts than I had. As the campfire smoke wafted up, swirling around the faces of my companions, I quickly realized that this crew was one I could learn from and grow with, taking in their need to travel, their need to always be learning and exploring. They shared stories of trail guiding and working patrols in the jungles of Africa. I contributed my own small piece, but spent most of my time mentally preparing myself for the next day's adventure—a helicopter ride up to a hike where I had no idea what to expect. I crawled into my sleeping bag and tried to emulate the adventurous spirit of the group, hoping my nerves and concerns would drift away as fast as I drifted to sleep—I needed a solid night's rest for whatever the next day held.

I awoke the next morning to the booming sound of the cook shouting, “breakfast's ready!" and gazed across the open swath of land we had commandeered as our own for the week. Tents dotted the dewy grass, and the clouds made a slow traverse across the mountains that rose seemingly straight up from our basecamp. We'd been briefed the night before on what to expect today—breakfast, pack up a lunch, and then pile into the dust-covered trucks to head to the town's airport (and by airport, I mean a small building with no security and a single, two-lane landing strip.) I sat quietly listening to the group divulge how they slept in their tents and absorbed the early morning jokes making their way around the breakfast table. I gulped my coffee, though I had no need for any more adrenaline, and zoned in and out from the entertaining chatter. How hard is today's hike going to be, and how far? I felt apprehensive about asking the night before, and didn't want to ask now, either. What about the helicopter? Will I get motion sickness? At this point, I really didn't have a choice. Besides, in the last few years since I'd finished graduate school, I'd managed a terrible job away from my entire family and managed to survive a backpacking trip through New Zealand. I could handle a measly little heli-hike, couldn't I? Couldn't I?

Buckle in for the ride of your life

“Seat belt is like an airplane's. Put your headphones on so we can chat, and we'll load your bags underneath. In case of an emergency, turn the red handle and the entire door will pop off. When loading, stay crouched, and hold onto your hats," said Doug Strachan, the pilot from Bella Coola Heli Sports. We went in groups, watching the first crew of four take off smoothly as the rotor blade blasted us with chill mountain air. The helicopter rose and roared its way toward the mountain face, ascending only when it looked like it would careen right into the edge.

My turn next—I'd taken my Dramamine just in case, hooked my hat to my pack, and tucked my sunglasses into my headband. I wasn't the only chopper virgin, but I was the only one who hadn't hiked in a few weeks. And the thing about having a helicopter drop you off on the top of a mountain, there's nothing to do but hike if you want to ever make it back down.

We landed, loudly, boisterously, but safely, on top of Goat Mountain, with intentions to trek the Four Mile Ridge trail. As I took in the views—sweeping, dipping, symmetrical valleys, the snow-capped Mt. Saugstad and the lush, 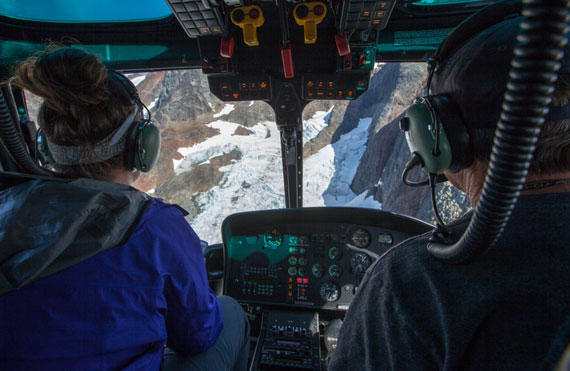 green swath of Bella Coola below, what I didn't see was a path. Rather, mounds of granite outcrops dotted the landscape and fresh heather covered the ground. “Alright, you all seem like you know what you are doing, but careful on the granite," said our mountain guide, Neil. "Get used to it down here to make sure you have correct footing and are sticking before we head up where it gets steeper." And that was it. We started off, aiming for an orange peak up and to our right. The views of valleys and glaciers quickly pushed some of the nervousness from my mind, as did the ever-lasting jokes and group selfies that our goofy cohort offered up. We passed snow patches left over from a months-ago winter, and trickling streams that seemed to start from and end nowhere. Indian paintbrushes sprouted up between granite, and krummholz juniper made its way along the ridge, as did we.

My determination wavered. We didn't have far to go, but if I couldn't make it, what then? How would I get down, and more importantly, how would I face the group?"

Some of my companions were already becoming tiny, bright figures off in the distance. They apparently had no trouble scrambling up and over the large and sometimes slippery rises of granite.

I wasn't faring so well. Parts of the hike were more technical, and my short legs and nerves threatened to get the best of me. With each pass I managed to traverse, I was buoyed by my fellow travelers' happy smiles and enlightening words. Then my eyes flicked up to the scree field ahead that led to the summit. I hate shale—it brings to mind images of me sliding down the mountain face, rolling and tumbling along with the loose rocks. Again, my determination wavered. We didn't have far to go, but if I couldn't make it, what then? How would I get down, and more importantly, how would I face the seemingly fearless group?

I breathed, I trudged on, and I tried to allow the scenery to quiet my nerves. I was a rookie yes, but I wasn't a quitter. Slowly—as there were many stops to take in the scenery and catch my breath—I made it to the scree field that led to the top. Half the group was already resting at the summit, but for myself and a few others, it was time to conquer this last pass. Again, most of my fellow hikers seemed to have no problem hauling themselves up and over and around loose rocks. I, however, worked to stay focused as I made my way over the challenging terrain. I started off slowly, placing my feet here and there, testing out each rock before I really put weight on it. At times, rather than staring straight at my feet (or down the side of the mountain where I would be rolling if I didn't step right), I allowed myself to glance up, look around, and really take in where I was and what was around me. Yes, I slipped a few times, and stepped on a few rickety rocks. But with the group leading the way—unknowingly pushing me out of my comfort zone—plus the confidence of making it this far, the scree field soon became a thing of the past as the summit drew near.

Reflections from the top

Of course, we all made it to the top. I did so in my own time and at my own pace. As we rested, we took in the views: to our left was the Monarch Glacier and ice field, in front was the domineering Mt. Saugstad, and to our right were the fjords that lead out to the ocean. As impressive as the views were, I was even more appreciative of my fellow travelers, who helped me come back to and find my own adventurous spirit. I looked around at the group and took stock. They started as mere strangers at first, evolving into inspiring comrades in adventure. Whether they knew it or not, they'd inspired me, pushing and challenging me to reach the summit. I silently thanked them, and then sank into a quiet, contented exhaustion. “Can I pull the girl card and ride shotty?" I asked the crew of our return flight. “How about just the friend card, instead?" one of my new travel allies said with a smile. We all crouched down as we heard the chopper coming over the ridge, and I got in first, buckling up next to the pilot. We eagerly claimed our reward for a grueling hike with up-close views of Mt. Saugstad and the surrounding valleys, followed by a nose-dive that brought us close enough to a glacier that we could see the ice melting and the rivers running, capped off by some well-earned hang time in the backcountry of Bella Coola. 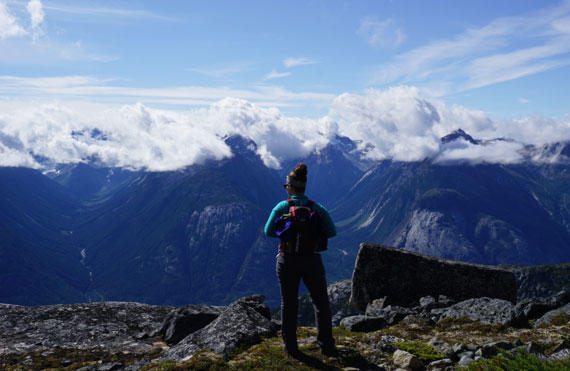 The trip was coming to a close, with the mid-week helicopter adventure the highlight so far. Between the spectacular landscape, the stunning adventures that pushed each of us, and the new crew that I dared to call my friends, I had almost too many memories to bring back home. But between all the snapshots and recollections to come, I'd hit a milestone during this trip. I was heading back to real life with a newly established sense of adventure, a rookie no more.