Jenny Willden was hitting one of life's major milestones — her 30th birthday. Rather than ringing in her momentous day the traditional way, she decided to celebrate in the most meaningful way she knew how. By bagging her first major peak.

As I celebrated my 30th birthday this year over cocktails with friends, I realized a milestone like this should be commemorated with more than just a headache the next day. Though I didn't feel older, I wanted to prove to myself I wasn't. That's how I found myself in Telluride, Colorado this summer, staring at snow-capped Wilson Peak. This famous mountain has graced Coors' beer labels for over a century and is regarded as one of the toughest and most technical of Colorado's numerous 14,000-foot peaks — more than 50 in total. Despite the intimidating descriptor (or maybe because of it), my best friend Rachael and I selected it as our first to summit. 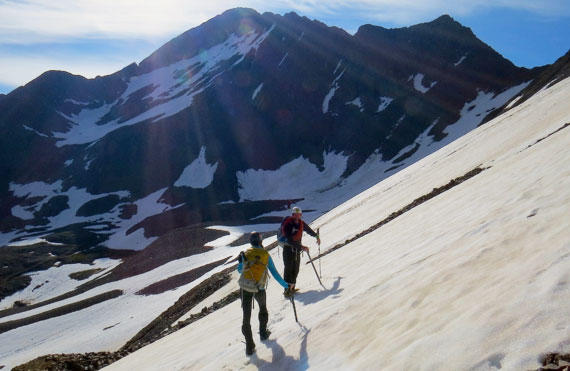 The thing is, the peak looks a lot smaller on beer cans than in real life. “That's Wilson Peak?" I asked, as we stared out Telluride's gondola windows on our first night in town. I silently muttered a few expletives as a sense of panic washed over me. The black mountain looked more akin to Mordor than a hiking spot, and the anxiety set in. Did we train enough? Are we ready? Will I get altitude sickness? Will we be struck by lightning? Rachael didn't melt down, but I could tell she was nervous. We've been best friends since our teens and have been through acne, prom and breakups together, but this was still the scariest thing we'd taken on. After a restless night, we departed at 3am for the Rock of Ages Trailhead—the most popular Wilson Peak starting point—with our San Juan Adventures guide, Jayci, a bearded veteran mountaineer with 40 Wilson climbs under his belt.

The black mountain looked more akin to Mordor than a hiking spot, and the anxiety set in. Did we train enough? Are we ready? Will I get altitude sickness? Will we be struck by lightning?

“Is this your first 14er?" he asked as we bumped along the unpaved wilderness road. “Yeah…" we said sheepishly. Jayci told us not to worry, but as he handed me a liability waiver absolving his company of responsibility if we were injured, maimed or worse, the pit in my stomach grew. From the start, I felt like the dead weight of our three-person team. At the trailhead, I pulled my pack from the trunk to find it sopping wet. My hydration bladder leaked, most of my water was gone, and my spare clothes were useless. Thankfully, Jayci had plenty of water to spare, and we began the journey up. We hiked through darkness, emerging on a ridge where a brilliant sunrise colored the sky and the forest stretched endlessly before us. Two hours in, we reached the snowfield and added crampons and ice axes for navigating deep snow. We trekked steeply up through knee-deep snow to the Rock of Ages Saddle at 13,400 feet, where Jayci stared in the distance at a patch of dark clouds. I could tell he didn't like what he saw heading our way. "How do you know if clouds are dangerous?" I asked. "See how those clouds are building vertically instead of horizontally across the sky?" he said, pointing with his trekking pole. "That's a thunderstorm potentially coming this way." 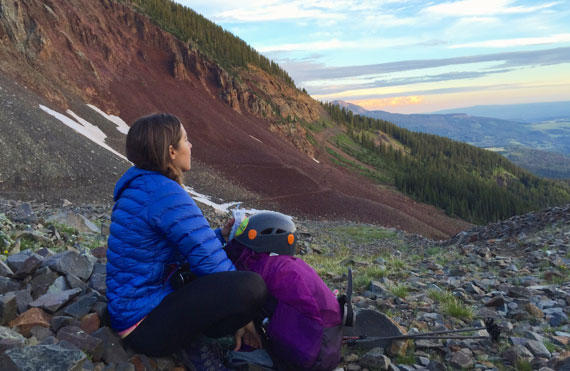 Jayci pressed us to move on, but I was momentarily in awe of the vista and requested a moment to take in the wash of color in the sky surrounding our knife-edge ridge. The Wilson Group's other foreboding 14ers—El Diente and Mount Wilson—filled the landscape to our right. Telluride was too far off to spot, and despite all the peaks I've hiked at home in Salt Lake City, this felt the farthest removed from civilization. Jayci hiked on at an intense pace, and my less-than-stellar lung capacity soon caught up with me. Each breath and step tried my endurance at this altitude. I lagged behind as we approached the final saddle before the summit. When I arrived, Jayci delivered the bad news. “We're yielding to the weather," he said loudly, hoping a nearby family of hikers sporting t-shirts could hear him. They didn't listen, and continued despite the increasing wind. He simply shook his head. As if on cue, fast-moving clouds rolled in and covered the peak, and Jayci seemed antsy to leave as he snapped our celebratory photos on the saddle. Even as I smiled for the camera, I felt the beginnings of the telltale headache in my temples—the first sign of oxygen deprivation. Once out of the family's earshot, Jayci regaled us with his lightning encounters atop Colorado 14ers. Getting down was more treacherous than hiking up, and we were moving more slowly than Jayci liked. So when we reached deeper snow, he said it was time to go glissading. “What's glissading?" we asked. “I think it's French for butt-sliding," Jayci said as he demonstrated how to butt-surf down the snowy slopes and how to stop oneself with an ice axe if a slide starts to go out of control. He went first. We reluctantly followed. 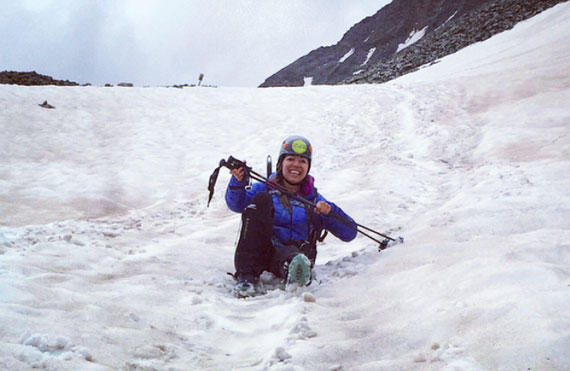 "Woooo!" Rachael yelled as she slid down the slope. I followed, laughing uncontrollably as I used my trekking poles and ice axe as a makeshift paddle to steer to the bottom of the snowfield. (Note of caution: As thrilling as it was, improper glissading technique is a common cause of many mountaineering injuries. Do it with proper training or an experienced guide.) We approached the tree line and Wilson's weather worsened. Clouds covered it completely, the skies emptied, and thunder rumbled in the distance. I wondered what became of the family attempting to summit. After nine hours, we reached the car, and despite the shortfall at the summit, we couldn't help feeling a measure of pride at climbing to 13,500 feet—2,500 feet higher than we'd ever hiked before. Before we'd set out, Jayci had told us that only 50 percent of his clients make it to the top. Even with training and the best preparation, unpredictable weather makes a summit uncertain. And as Jayci said, "There's always another day." On the long ride back to Telluride, we were mostly quiet, but I asked one question, “Could we have made it to the top if it weren't for the storm?" “Definitely," Jayci said without hesitation. With that ego-soothing thought in mind, we napped, imagining a triumphant return next summer to conquer Wilson Peak, and perhaps Mount Wilson along with it—as long as the weather doesn't stand in our way.