"Don't look down," they say. It seemed like good advice as I tiptoed across a narrow snow-bridge near the end of the Cosmiques Arête, on the Aiguille du Midi in Chamonix, France. 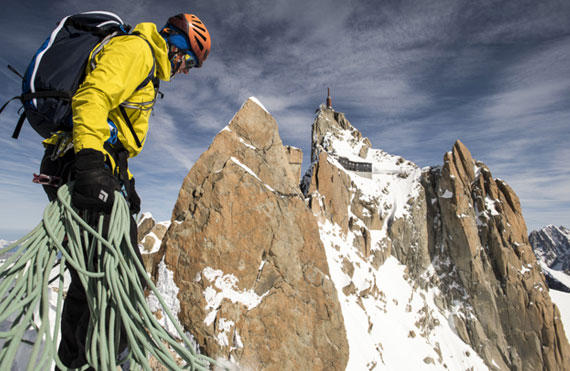 It's a popular alpine climb tucked into the Mont Blanc Massif mountain range. The sheer drops on both sides were so daunting that they almost made me forget how to walk in a straight line. But as soon as I reached more substantial ground it occurred to me this advice is nonsense. Seeing the world drop away beneath your feet, resisting the lethal pull of gravity, imagining 'normal' life grinding on miles below—these are the things that make alpine climbing what it is. If you don't look down you're missing the point. I'd decided to join my good friends, Charley and Sophie Radcliffe, on Cosmiques Arête. Chamonix, a commune in the French Alps famous for mountaineering pursuits, has enough skiing to keep anyone busy for many seasons. Although I was there to ski, it would be a missed opportunity to not climb at least one of the winter classics. And the arête — more a traverse of a ridgeline than a vertical summit bid—is a three-star uber-classic. 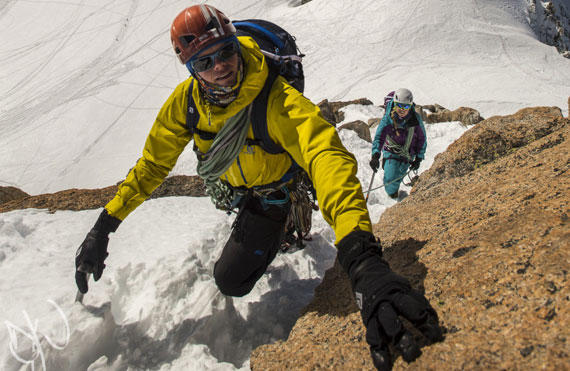 I've been rock climbing less and less in recent years, the slow pace doesn't thrill me like it used to and I'm not dedicated enough to really improve. But winter climbing still draws me in. It’s not that I relish being cold. It’s more that I enjoy the pull of the high mountains, the solitude of snow and the wilder side of climbing. Compared with a lazy afternoon at the crag, climbing in the snowy Alps is a genuine adventure. Putting myself at the mercy of the elements puts all the monotonous problems of real life into perspective. Being out of shape in climbing terms made the route feel bold. I knew the technical grade was well within my ability, but how would my head handle the challenge of exposure at altitude? I was also well aware of the gulf in ability between me and those who told me the Cosmiques Arête was easy. As home to some of the world's best climbers, standards in Chamonix are somewhat higher than those of mere mortals, so 'easy' is a relative term. The initial trudge up the ridgeline brought that home. It's an easy-angled start, and essentially a walk. But it succeeds in preparing you for the real challenge of alpinism, and for me the real pleasure of it: exposure. Exposure is so much more than the likelihood of falling. On this route the dizzying effects of altitude—it undulates between 11,800 and 12,400 feet—tempers the technical simplicity of the first steps. As I plodded higher my feet wobbled and my hands unconsciously searched for rock to assist in the modest task of standing. 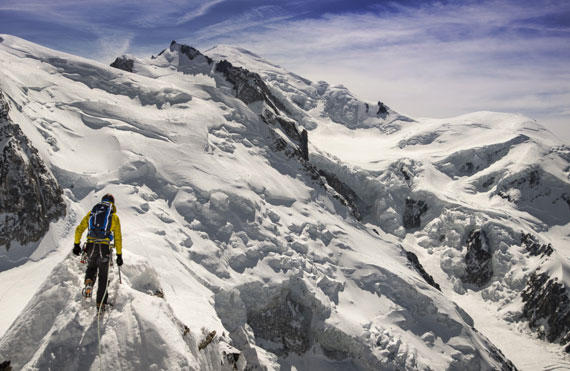 Here, at one of the highest points of the ridge you begin to feel alone, and that can be a challenge in itself. The Aiguille du Midi cable car is only a few hundred feet away, but rappelling the next section made it clear that there is no quick or easy escape from an alpine route. Even the easiest of rappels takes time, and the patience required to climb in this winter environment becomes more than a virtue. It's often said that speed is safety in the mountains, but a rappel is not something to rush. As always, I found that accepting the natural pace of the mountain turns a feeling of isolation into a pleasant solitude. After a tricky step around a bulging boulder, and an ascent of a steep gully, we crossed over into the shadows of the north side of the arête. Although the sunshine had kept us warm, the Alps don't respect the seasons. That simple transition into shadow was another aspect of exposure, and a reminder that spring is still very much winter above 10,000 feet. No matter when you climb the arête, snow, ice, and wildly changeable weather conditions, will be part of the adventure. 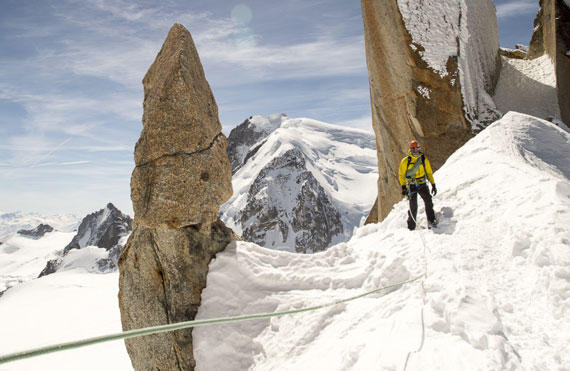 There are regular sections of interesting climbing, and precarious traverses, but among the most humbling aspects of the climb is crossing beneath the Grand Gendarme, a granite monolith that towers incongruously over the ridge. Nothing imparts vulnerability like feeling small. I finished the climb, up a long pitch of ice on the dark side of the arête, with a thought of regret. I regret that in four months in Chamonix I hadn’t laid myself bare to nature more often. But, I was glad I embraced exposure and made myself insignificant in the landscape. I realized very clearly what keeps drawing me to the mountains. It’s not the technical challenge, but rather the mental one that comes with these facets of exposure—the effects of altitude, of loneliness, and of being far from safety, at the mercy of the elements. In making myself vulnerable, I'd reconnected with the thrill, not the thrill of climbing, but of adventure itself. Is the Cosmiques Arête easy? Only if you're prepared to make yourself vulnerable. I guess that applies to all climbing to some extent. But a climb lacking in technical difficulty gives you the chance to appreciate feeling small and relish the opportunity to ignore that cliched advice—DO look down.