In a podcast I was listening to recently, comedian Iliza Shlesinger says in frustration, “It’s not girl boss, it’s just boss,” insisting we need to stop with all the gender talk. This stuck with me, as I couldn’t agree more. Looking back to the first terrain park built by all women at Trollhaugen in Wisconsin, it seems strange that we need to gather a group of women together so they can feel comfortable being women in the industry. I’ve never viewed it that way, and yet I’m all for it. But going into year two of the non-debatably feminist event known to the industry as Take the Rake, we need to develop our perspective a little further. How do we go from showcasing women in operations as a special, rare occurrence to it being the norm, without taking away from the event?

I worry my seemingly controversial view of feminism would be taken the wrong way, like I wasn’t standing up for my fellow sisters. But that’s not true. I fully support women working in mountain operations departments. That being said, I don’t view myself or my work as any different from a man’s. I felt pretty alone in this view until I came across a newspaper article by Maddy Butcher for the Washington Post, republished in the Jackson Hole Daily under the title, “West's Horsewomen Own Rare Brand of Feminism.” 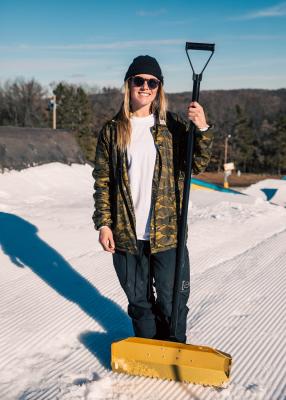 Butcher writes, “These women are the most feminist of feminists. But don’t call them that. They tend to be uninterested in gender politics, unversed in ‘self-advocacy.’ They might be soft-spoken, but they are not soft. They are active, but they are not activists.” We, as women in mountain operations, should look to these horsewomen as role models.

We have to learn to be like the “painting of a horsewoman in a wide-brimmed hat, red shirt, and chaps” at the “Dolores State Bank in Mancos, Colorado standing in front of “sign declar[ing]: ‘Horsemen Only’” with an “expression [that] looks peacefully pleasant… ignoring the sign.” We have to ignore the fact that terrain parks have been built by men for the majority of history so far. We can ignore it and participate in it in a way that doesn’t draw attention to the gentlemen’s club nature of the industry. We can’t expect the sign to change from “Horsemen Only” to “Horsemen (and Women) Only,” instead, we have to stand our ground and know these signs don’t intend to exclude us. 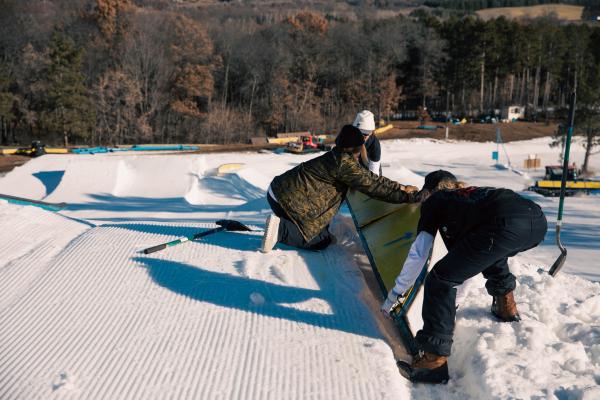 The terrain park is to park crew as the ranch is to the cowboys and cowgirls. Like the ranch sees no gender, it was never anyone’s rake to take. It’s not the men keeping women out of operations – in fact, they want us here. By separating us and them based on gender, women are only drawing an imaginary line to say they can’t cross it. But I insist, cross that line. Women working “men’s” jobs, and doing it well, is the only way to change the preconceived norm.

Butcher continues, “Yes, gentlemanly decorum endures (hat-tipping, two-step leading), but the workplace dynamic can be refreshingly gender-blind and merit-based.” And I think that should be the goal moving forward with Take the Rake. Somehow, by gathering a group of women to build a terrain park and learn skills, we have to become gender-blind. Take the Rake demonstrated that men aren’t the only ones building terrain parks – we created an insanely fun park for all humans to enjoy and the men were excited to see it. The tone from the men working and riding at Trollhaugen was 100% more on the side of “finally” than surprised that we could do it. The men didn’t laugh at us or insist on helping move heavy features. Instead, they remarked, “This is the coolest thing to ever happen at Trollhaugen.” They want us here. 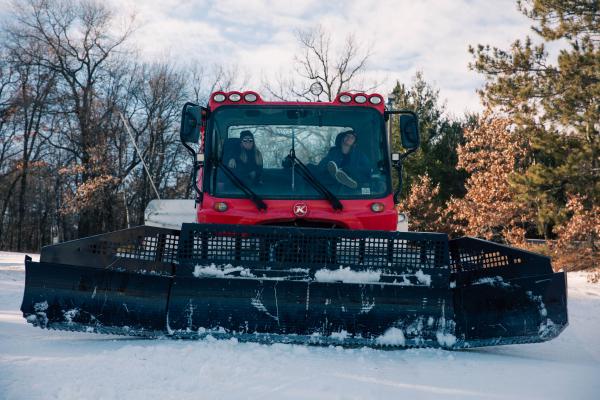 Butcher tells a story about a woman rancher in California named Fallon Turner. Turner “recalls a recent cattle-branding session for which she and her brother had recruited a few local high school football players to help. She said the young men outweighed her in muscles and bravado, yet struggled to knock down the calves. She laughed as she recalled showing them how to use leverage and body position, telling them, ‘It’s basic physics, boys!’”

The same physics can be applied to women moving a heavy steel rail from the top of the terrain park to the place where they will dig a trench and place it in the snow. It shouldn’t be viewed an amazingly unnatural feat. It’s just something that we can do when we learn to use our bodies and apply basic physics mixed with self-belief. I hope that’s what other women see when they look at Take the Rake. 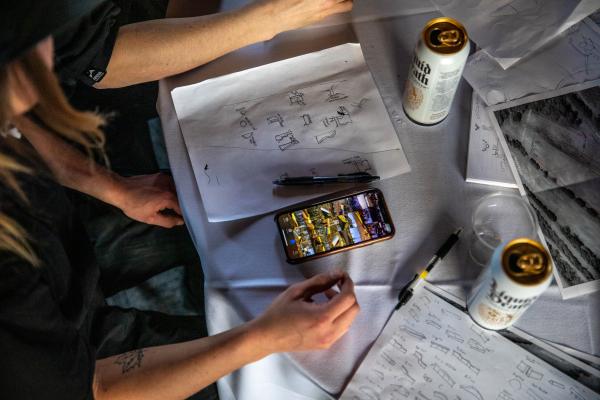 If there is a boss out there who won’t hire you because you’re a woman, you don’t want to work for them anyway. This exclusive mentality lurks in operation departments sprinkled throughout the industry, but it’s not the norm and it will die out. These men are only keeping themselves from a hiring pool filled with passionate, eager to learn workers who will pay attention to detail and ask all the right questions.

So, go ahead, ask them. Don’t hold yourself back because you’re afraid to ask to join. Take the Rake was a feeding frenzy of women who were hungry – hungry to show up, hungry to learn, hungry to show others, and hungry to be together. These 11 women opened the flood gates and created a free-for-all mentality in an industry that is supposed to represent freedom of expression and creativity for all. These women made waves, and if you haven’t noticed yet, take a look at your local terrain park and see if you notice anything different about who’s raking the jumps or operating machines. 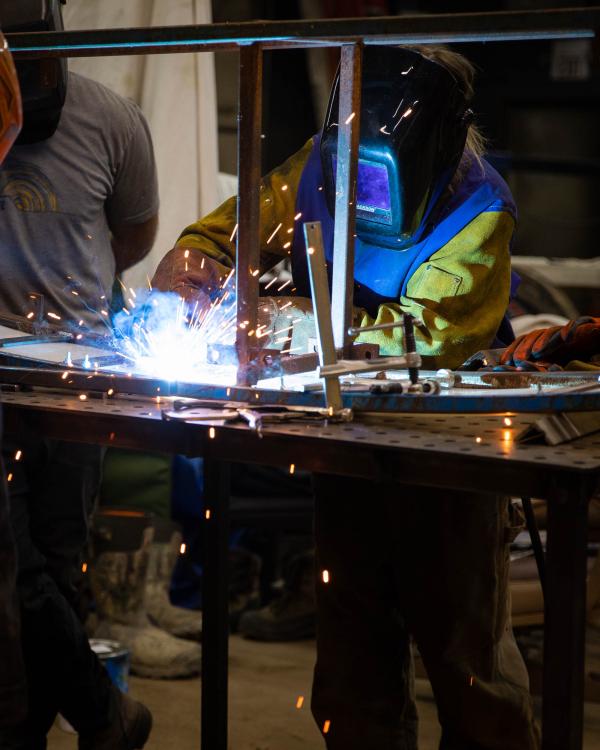 I don’t deny, it’s hard to dream of doing something without seeing someone like you doing it. But because of Take the Rake, women in mountain operations have no more excuses. The rake is “ours” as much as it’s “theirs.” The rake sees no gender. The snow cat likes a woman’s gentle touch. Now we have to continue showing up and showing the industry what we, as women, can do so it stops being viewed as miraculous to have a mix of genders in mountain operations departments. 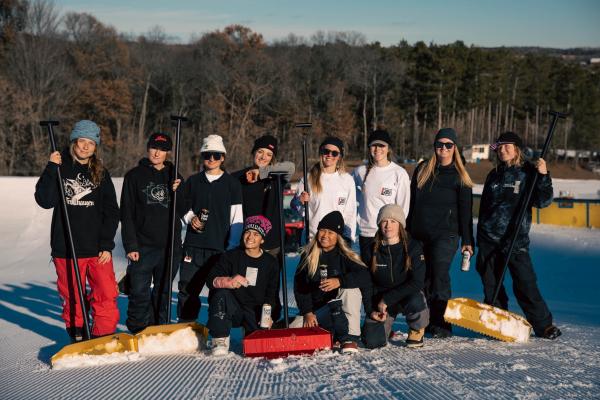 All photos provided by Mary Walsh

Jess Goucher is the Terrain Park and Bike Park Assistant Manager in Jackson Hole. Originally from New Hampshire, Jess earned a Bachelor’s Degree in English from Saint Anselm College while playing lacrosse. She grew up in the icy parks of New Hampshire and has been living out west enjoying the quality of snow and size of the mountains since 2015. Deciding to make her passion for parks her life, Jess has worked on numerous events including the Natural Selection Tour, Kings and Queens of Corbet’s Couloir, Snowboy Productions events, USASA rail jams, and Take the Rake. Jess has been practically living in snow gear since she could walk and can't imagine doing what she loves without GORE-TEX gear keeping her comfortable and dry in the range of environments from harsh Wyoming winters to summers on Mount Hood’s snowfield.