Explore Support Pages
Read how one family had the trip of a lifetime on Denali's Polychrome Glacier.

Our 15-year-old nephew, Tate, froze on the side of the mountain, unable to go up or down the steep and shifting gravel. Just when he summoned more courage, a gust of wind blew him down again. In frustration, he groaned, “I can’t do this!” I tried not to yell, but wanted to firmly convey the seriousness of our predicament. How were we supposed to know he hadn’t crossed a scree slope before? Why did we assume he could? Below were cliffs where we couldn’t see the bottom but climbing back up didn’t seem like much of an option. Crouching on the slope, we all took a deep breath and thought about what to do as the wind whipped around us. My wife, Susan, had cooked up the plan to get to Alaska with Tate on a backpacking trip. Susan had hiked in Denali years ago and excitedly told Tate and me about the rugged wilderness and hiking possibilities. 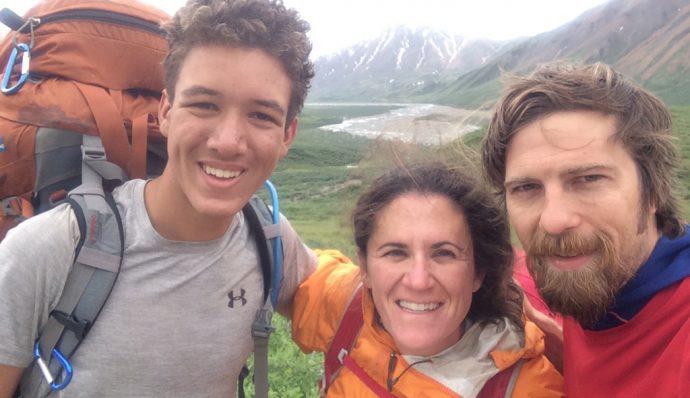 Nearly the size of Vermont, Denali National Park and Preserve is accessible to hikers and backpackers via the camper bus that traverses the 92-mile road through the core of its wilderness. To preserve the wilderness experience for others, it’s required to camp out of sight of the road and walk on gravel whenever possible. This makes travel along the river valleys and streams necessary in a place where there are no trails. We rode the bus 42 miles into the heart of Denali and were to spend one night in backcountry Unit 8 and then hike over to Unit 9 for night two. When the bus dropped us off that first day, the silence enveloped us like a fog. We were alone. The driver told us it was about 5 miles to the foot of the mountains that lead up to the Polychrome Glaciers. We had heard it was another 2 miles to get out of sight of the road. We hiked along the river and excitedly talked about the possibility of a stream crossing. We were less excited when the icy waters made our feet numb. The novelty was gone at the second crossing, and I stupidly volunteered to carry Susan across. Machismo, I suppose. I carried our packs over and then crossed back. After I carried Susan over I thought I was done, but I had to chase one of our boots as it floated down the river. When the blood flow finally returned to my feet, I questioned my machismo. I had crossed that stream seven times. 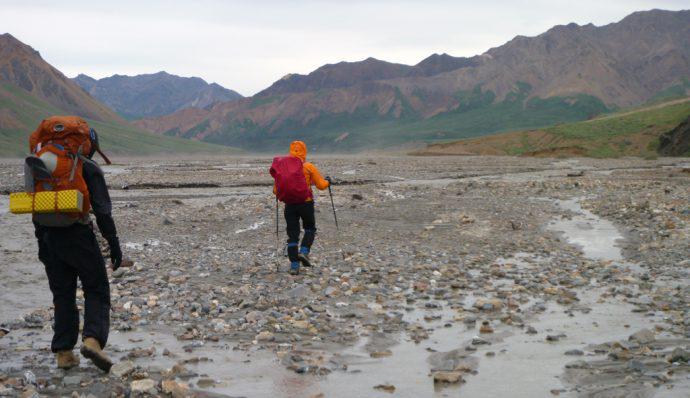 As we ascended into the mountains for our first night, we carefully set up our “bear-muda triangle” with our tent, food, and cooking area at the corners and 100 yards apart. If bears do smell food, it is downwind from the tent area and away from people. Setting up the tent in the 20-30 mph winds was comical, even with three of us, but we eventually found a moderately sheltered area. Trees help buffer the wind, but tree line in the park is around 2000 feet. The bus dropped us off at nearly 2400 feet. As I drifted in and out of sleep after dinner, I waited in vain for darkness to fall. I wished I had listened to Susan and packed a sleep mask. I would drift close to sleep only to be awoken by a huge gust of wind. Sunset eventually arrived at midnight, but twilight lasted less than four hours. The date was June 17, only a few days shy of the longest day of the year. 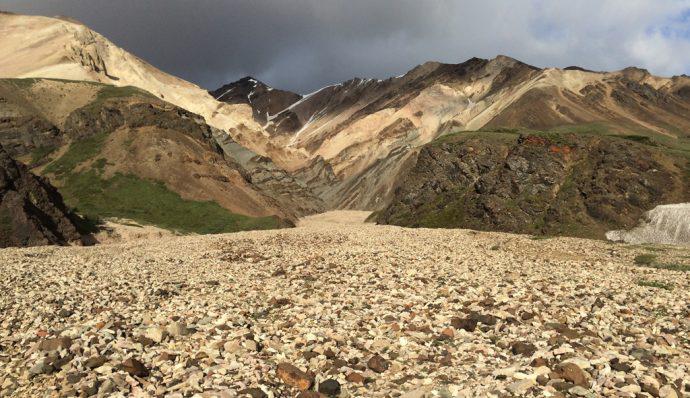 As we climbed the mountain pass the next day, the snow crunched beneath our boots and for a few moments, we were sheltered from the wind. I was aware of other things. The deep blue Alaska forget-me-nots were in full bloom. The roaring stream flowing under the snowfields was a glorious sound. But it made me uneasy. How far would we fall if the snow collapsed? On the ridge overlooking the Toklat River, the wind roared like a freight train. Walking was difficult with hiking poles. Our packs acted like sails taking us on the course of the wind’s choosing. We dropped our packs and scouted options for our descent. One stream valley was rocky and steep; the other muddy and less steep. Into the mud we sank. We were able to descend about two-thirds of the way off the ridge when the creek drainage became steeper. We made our way down 3-foot drops. And 4-foot drops. But 6 and 8-foot drops were not possible. We opted to move sideways along the side of the mountain, which is where this story began: Tate, Susan and I crouched on the side of a mountain, seeking shelter from the wind. Descending steep gravel fields (also called talus or scree) is tricky. It’s easy to slide down, but hard to control. Tate wanted to slide, but we had crossed above the cliffs and I was afraid his slide could become uncontrolled. I positioned myself below him while Susan hiked behind him. In the end, the solution was incredibly simple. He left his pack behind and was able to move more naturally without the additional weight for the wind to blow around (did I mention he is 6 foot 3 inches tall and 140 pounds?). 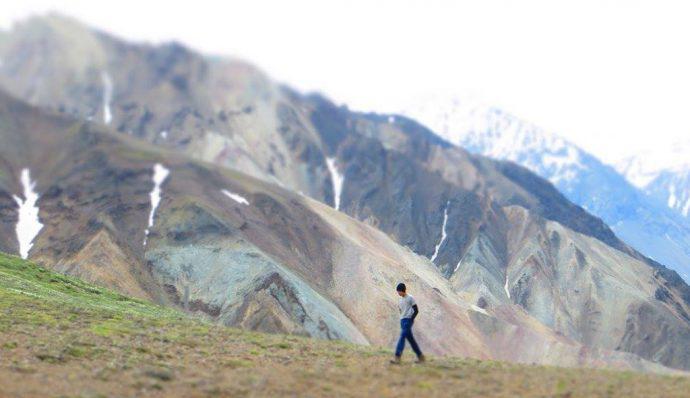 Only 10 minutes later, we had safely descended into the creek bed. I grabbed a drink of water and began cursing the wind as I prepared to climb back up for Tate’s pack. Then suddenly, a huge gust of wind came and Susan yelled. “Adam! Tate! LOOK!” She pointed up and we all watched Tate’s pack fly down the mountainside, blown loose by the wind. It plummeted off the cliff and landed at our feet. With only a scratch to show for its descent, we all smiled when we realized the irony: we thought the wind was our enemy. We laughed as we descended into the valley seeking shelter. Now we think twice before cursing the wind. You never know, it might come in handy. How to Find Unit 8: Polychrome Glaciers If you want to have your own adventure in the Polychrome Glaciers, you can access Unit 8 from west of the East Fork River Bridge or west of Polychrome Overlook where creeks create corridors that will help you avoid thick brush. It's important to note that there are steep cliffs for about 2 miles south of the Park Road, which makes it difficult to drop down into the unit. Gravel bars that lead into the Alaska Range provide solid footing for hikers. Once you reach the mountains you can travel east or west through magnificent glacial valleys. From Unit 8 you can make it to the Unit 7 (the East Fork River) through the eastern portion of the unit. You can reach Unit 9 (the Toklat River) through the southwest corner. But be careful, there are steep scree slopes that make for dangerous terrain. If you plan on camping in Unit 8 don't forget to keep your tent hidden from view of the road. And if you don't want it to blow away, make sure you secure it. The winds that whip through the valleys are strong, to say the least. Essential Gear for Polychrome Glaciers If you’re curious about the gear we used, here’s a partial list featuring some of the essentials: