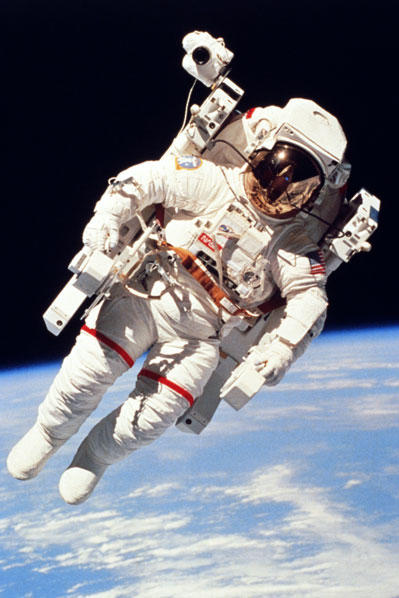 Did you know that the technology keeping you comfortable in the wilderness also protects astronauts and spacecrafts out in the cosmos? In fact, Gore's products have been to the moon and back many times and in many capacities. Here are a few key moments:

In 1966, NASA launched its first unmanned mission to the moon using a lunar soft lander, the Surveyor 1. The craft utilized Gore's cables. Why? Gore used Polytetrafluorethylene (PTFE) to create a long-lasting, durable cable that could not only withstand a wide temperature range, but also offered high-quality signal transmission. The cables continued to be used in subsequent missions.

When Apollo 11 landed on the moon carrying astronauts Neil Armstrong, Buzz Aldrin and Michael Collins on July 20, 1969, so did Gore. Once on the lunar surface, Armstrong and Aldrin installed seismographic equipment, connected to the lunar lander with Gore's cable. It was perfect for the mission because it was small, lightweight and could easily stand up to the extreme temperatures of outer space.

Again, Gore was behind a "first" for NASA. When the space agency launched its first shuttle mission, Columbia, its astronauts wore spacesuits featuring woven GORE® Fiber in the outermost layer, which continues to be used in NASA's suits today. In fact, it's now incorporated as an inner layer of each suit, to provide chemical and thermal resistance.

Gore isn't finished in space, and isn't limited to the moon, either. When NASA's Spirit and Opportunity rovers were sent to Mars in 2004, Gore was on board, too. The rovers used Gore's cable assemblies to help communicate data from the rovers to Earth. Other rovers, like Phoenix, have also used Gore's assemblies since. Most recently, however, is the use of Gore's product technology in the Curiosity rover that departed in the fall of 2012, and remains on Mars today. In the Curiosity rover, shielding materials by Gore protect against electromagnetic interference and data loss, while GORE™ SKYFLEX™ Aerospace Materials are used to help cushion the spacecraft's cables from damage.

Gore's products continue to be used in space missions and space suits to this day because of their reliability, superior performance, and resistance to radiation and extreme temperatures. It should be no surprise, then, that the product technology that withstands the harsh elements of space can also handle whatever wilderness challenge you throw at it.