It's a bluebird day—sun shining, no clouds in sight—and the snow beneath your blades is like satin. 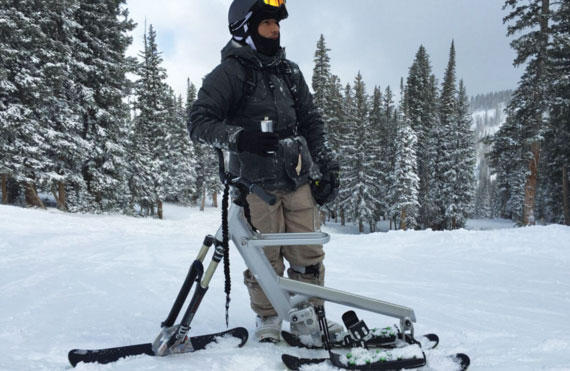 You got first chair and are ready to feel the wind up against your jacket. But there's no need to strap in or grab your poles. Instead, you grab the handlebars and push off, cruising on the three "skis" of Snogo, a new downhill snow bike due to hit the market in early 2016. "I wouldn't be on the mountain if it wasn't for ski bikes," says Obed Marrder, founder of Snogo, which is currently in its funding phase on Kickstarter. Growing up in Salt Lake City, Marrder had plenty of opportunities to get outside to hike and mountain bike, but getting on the slopes was a different story. He broke several bones in his attempts at skiing and snowboarding. Needless to say, getting down the mountain the traditional way wasn't his thing. Rather, Marrder thought, why not take his love for mountain biking to the snow? He and co-founder Chase Wagstaff, a childhood friend, tried a few other snow bikes on the market, but ran into challenges immediately. The biggest one? Ski resorts were very reluctant to allow snow bikes on the trails, questioning the safety of the bikes that were available at the time, because they weren't familiar with the gear. Undeterred, Marrder and Wagstaff were fortunate enough to be able to test various existing bikes at Utah resorts, and after two years, had enough data to start working on their own concept. First the team addressed resort managers' concerns. That meant allowing for control of the bike on and off the lift and adding a leash to omit runawaybikes. "A lot of our ideas came from our own struggles with these different models," Marrder says. "We wanted to merge the best qualities into one." Although the Snogo is new, riding a bike on the snow isn't — evidenced by Marrder and Wagstaff's extensive testing leading up to the release of the SnoGo. Ski bikes were originally created to get around the snowy villages in the Alps. The Sit Ski, the first ski bike capable of climbing slopes, was created in the late 1940s by Austrian Engelbert Brenter. Since then, the model has largely stayed the same. Most use two blades, and almost all styles involve sitting.

A lot of our ideas came from our own struggles with these different models. We wanted to merge the best qualities into one."

Marrder remained unsatisfied with the old school way of ski-biking during his testing, so the shift in design features began there, with the addition of the third blade and the removal of the seat to allow for a standing position. “We've had people go from the original ski bike to our bike, and the response is overwhelming," he says. "We've been able to capture an intuitive bike-riding feeling." 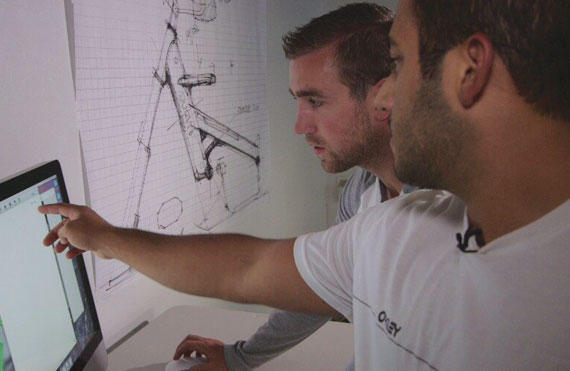 Next, Marrder focused on portability. Most snow bikes are large and heavy, making it hard to hit the trails without advance notice and a couple SUVs. Three Snogos, however, can lie flat in the trunk of a Toyota Corolla thanks to a quick-release disassembly mechanism. Marrder and Wagstaff also designed the Snogo to be much lighter than current models. "Most snow bikes consist of a regular mountain bike frame with heavy attachments welded on," says Marrder, who instead created a frame specifically for snow-biking. The result: a lightweight bike that retains functionality, allowing riders to lean into turns, carve around corners, and shred where they please. When mountain biker Chaz Nelson first tried a SnoGo, he was surprised at the shallow learning curve. "By the end of the first run," he says, "I was going off jumps, carving hard lines, buttering in circles, and dodging trees." Snogo riders, can take the bike onto lifts and, according to its makers and testers, onto groomers, medium powder trails, and moguls. A deep-snow model is currently in the works. And as the Snogo launches, Marrder hopes more and more resorts will be on board (visit here for a current list of resorts that do allow ski bikes); the Snogo is slated for rental at three different Utah resorts for the 2015-2016 ski season, including Bahnhof Sport in Park City. So, as the powder settles this winter, and the slopes begin to fill up, don't be surprised if more than one alpinist is shredding down the mountain on three legs instead of two. Just don't get in their way.