Explore Support Pages
Climbing is and always has been Eric Horst's life. So it's no surprise that his passion for the sport spread to his family as well. Today his sons, Cameron and Jonathan, have joined the ranks of some of the most elite climbers in the world before even learning to drive a car. Take a vicarious climb with the whole Horst clan.

From the time he was a young teen, the nexus around which Eric Horst's life spun was climbing. And although a love for the sport might not be genetic, it's no surprise that his passion has found its way to his two sons. 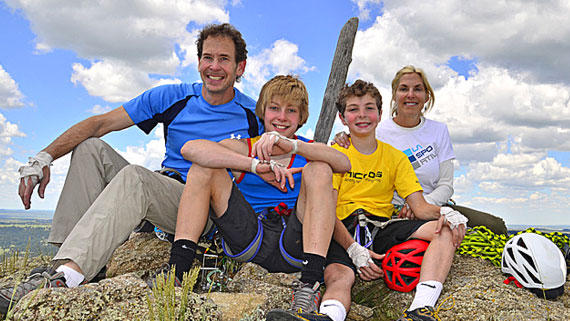 Growing up in Pennsylvania, Horst began climbing in 1977 at age 13. After his first ascent in the crags of Lancaster, Pennsylvania, he became obsessed, climbing 300 days a year, creating and completing dozens of new routes all over the country. He's coached since the late '80s, has written more than 40 articles, and is the author of three best-selling books, including his most recent, Training for Climbing. Climbing became a family affair when Horst married (and converted), Lisa Ann, an LPGA golf pro and coach, in 1988. The couple had two sons, Cameron, now 14, and Jonathan, now 12. And since the boys could crawl and walk, they've followed in their parents' footholds, sometimes literally. We caught up with Horst to talk about his twin passions—family and climbing—and how each influences the other.

How did you first share your passion for climbing with your kids?

We have a large, home climbing wall, which my wife and I train on frequently. The kids learned to play near our wall at a very young age — around two years old. Just as crawling leads to walking, when kids learn to walk the next progression is learning to climb. At that age the brain is prolific at wiring movement skills. The rest is history—the kids fell in love with climbing and progressed to a youth world-class level by age 11.

Were there any safety concerns introducing the kids to the sport as toddlers? 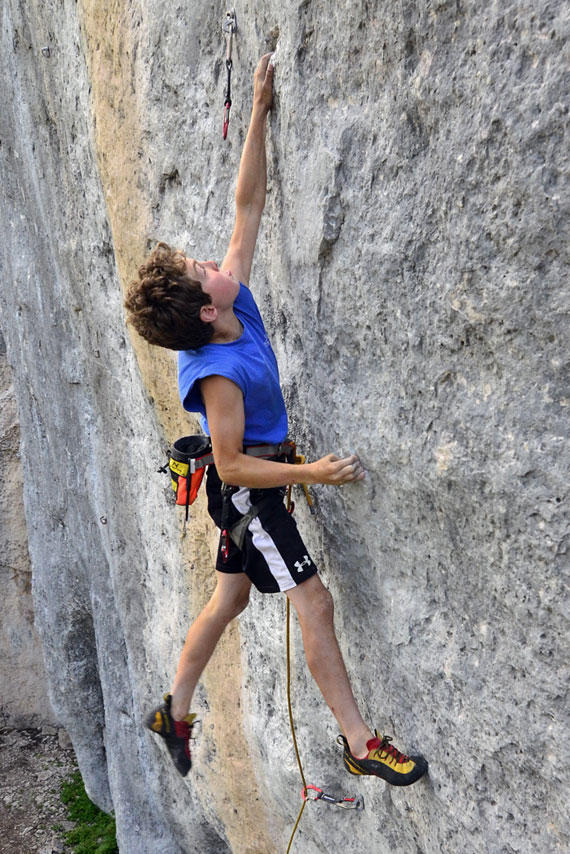 The kids always had adult supervision on the climbing wall. The one in our house is only eight-and-a-half feet high—it has different angles and facets, so it's pretty interesting to climb on, but it's not high. We have a padded floor with gymnastic mats below, so if you slip and fall on your back or elbow, it would be pretty tough to hurt yourself.

Were they excited about climbing from the start or did you have to encourage them?

Indoor climbing yes, but venturing outdoors is a whole other situation, as outdoor climbing presents added risks and dangers. So while the boys learned early on to play around on the home climbing wall, they didn't climb outdoors until age four. Initially, our outdoor ventures with the kids were more about camping, hiking and learning about the outdoors. We did some short, very easy roped climbs with them at ages four and five; not until age six did they totally come to understand the unique risks and challenges of outdoor climbing. After that, they quickly excelled at outdoor sport climbing. We would spend a couple weekends per month in the spring climbing locally—in Pennsylvania, West Virginia, Kentucky, and New York—and then travel west to the Rockies and Sierras to climb each summer.

Jonathan, How did you feel when you got started?

It's so long ago that I don't remember much detail, but I've always loved climbing—and I certainly don't need to be pushed to climb! It feels like playing for me, just like other sports that I do. Climbing outside is now what I love most. However, the indoor training on our home wall is still fun, since we make it fun and competitive.

Eric, what surprised you along the way?

How quickly the boys improved at climbing—both having reached the lofty grade of 5.14 [a beginner climb, much like a ladder, would be rated at a 5.0; the rates get harder from there, with the highest being a 5.15] by age 11. That's a rare grade achieved by few climbers and a grade I never climbed, not even in my best days! I'm not surprised that they quickly came to love climbing, however, because rock climbing is such an engaging activity. It requires mental skills much like a chess master and the physical skills of an elite gymnast.

How has the shared activity helped strengthen your relationship with your sons?

When we climb, we literally hold each other's lives in our hands, as the belay rope connects us like a lifeline. The consequences of a belaying screw-up are huge, and so the experience of outdoor climbing is rich — vital, even. We really enjoy setting and pursuing outdoor climbing goals together. For example, last summer we climbed the 800-foot Devil's Tower in Wyoming. Getting to take on a climb as substantial as that with our kids was a wonderful gift — something I don't think any of us will ever forget. This summer we're exploring the many great rock climbs in Germany's Frankenjura together. More experiences we'll all carry for life!

How have the skills they learned while climbing impacted other areas of the boys' lives?

Climbing teaches you so many skills that can be transferred and utilized in other areas of your life. Cam and Jon are both straight A students in school. I can't credit that to climbing, but I can credit it to problem solving. You get out on a hard climb and you can't do it, do you give up or do you work at it and figure it out? The ability to be able to deal with fear and emotion and anxiety is another skill. When climbing, you are up on a cliff with a potentially scary and life altering situation if you screw up. It's pretty safe if things go as planned, but still, if you are in that situation, you can't let your guard down. You have to be able to maintain focus in a stressful situation. It's a unique mental skill set. You can't lose it in climbing, you have to keep it together under pressure. 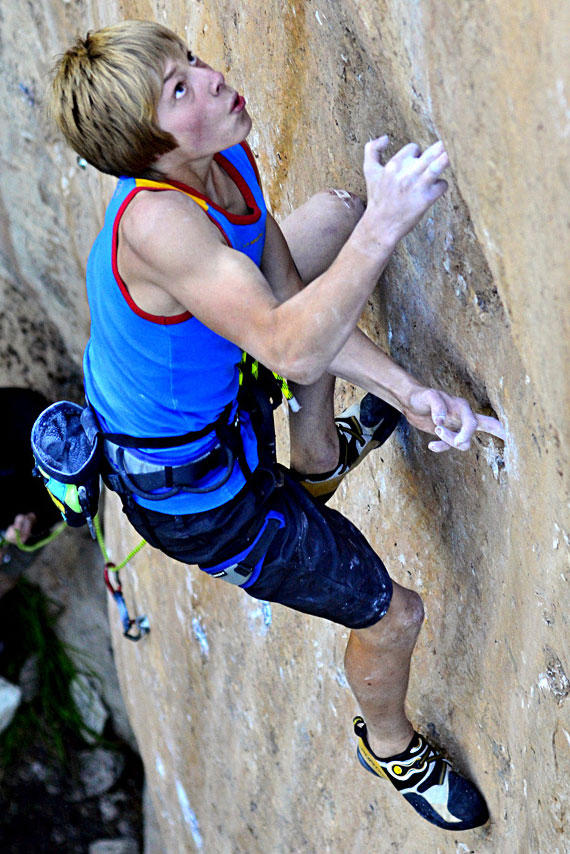 What have you learned about your kids through this shared activity?

Climbing with Cam and Jon provides me with insights into their unique personalities, strengths, weaknesses and goals, and I've come to appreciate their individuality. Although they are only 23 months apart in age, they are quite different—not so much physically, but I have gleaned understanding into how they each solve problems, deal with adversity and set and pursue climbing goals. My oldest son, Cameron, is more like me. He's what we would consider left brained. He approaches things in a more linear fashion; more mathematical. He'll keep working at a difficult sequence of moves and physically muscle through it and make it work. Jonathan on the other hand, is right brained — more of an artist, a creative person. If he's tackling a hard move, he'll kind of hang there and think out of the box. He'll try lots of different solutions, and it usually works to his benefit. He's more of a free spirit, letting me know that he's not going to try it my way. He'll do it his way, instead.

Cameron, what have you learned about your dad through this shared activity?

Dad is a one of the world's top climbing coaches, but we just know him as our Dad. He's been doing this a very long time, and it's exciting to see him still training and climbing hard despite his age. Not many people in their 50s climb like he does. Our Mom is a great athlete, too, and so we all enjoying pushing ourselves in climbing.

Eric, what advice to you have to other parents looking to inspire a passion for climbing in their kids ?

The good thing today is that pretty much every major city in the country has an indoor-climbing gym. That's where you want to start. Lean on the knowledge of certified instructors who can not only provide that climbing foundation, but can also share the safety basics of using ropes and belaying. Start indoors, and eventually sign your kids up for a class that will take them outdoors, where they'll learn the nuances of outdoor climbing and how to manage those risks. Eventually, they'll become more autonomous. If you want to learn more about Eric and his climbing family, visit EpicTV.com to see an online series about the family and their climbing feats.