Explore Support Pages
Cameron Martindell takes us along for an 89-mile trek, climbing and skiing from Aspen to Vail, Colorado. Peaking at 12,500 feet, this is a journey balanced by equal parts joy and perseverance. Simply said, his tale elicits a newfound respect for the backcountry and the adventurers that dare to take it on.

It was still dark in the wee hours of the morning as our group of 15 backcountry ski adventurers piled into a Suburban near Vail, Colorado, headed for Aspen. A sleepy giddiness infected the group. Most of us only just met the afternoon before, and the two hours to Aspen was a mix of chit chat and some much-needed dozing. One member, a 79-year-old, wool-knicker-clad man named John talked about his previous excursions on this trail. He figured this one might be his last, and he wasn't excited about that prospect. By the trip's end a few days later back in Vail, we'd have bonded and be joking freely amongst each other. But now, our thoughts were on the nearly 89 miles of snow we'd be tackling along the Benedict trail. We arrived at the trailhead in the faint blue light of morning, as the sun's rays were just beginning to hint of their emergence. Though it was cold, a vibrant energy warmed us from the inside as we buckled our boots, attached climbing skins to our skis and slung our packs on. 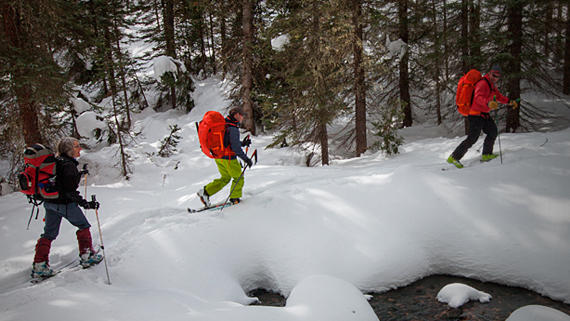 Nearly three hours and five miles of ascent later, we arrived at our first backcountry ski hut, McNamara, for lunch. We were all still excited, but it was a welcome rest. We had peeled off our morning layers along the way but promptly replaced them once we stopped moving. Since we each brought our own lunches, trades for different crackers or slices of meat and cheese ensued as the group's members warmed to each other. Our day's objective was 10 miles and several challenging hours away. By the time we reached our destination, Margy's Hut, later that night, we'd bagged 6,000 vertical feet. Most of us arrived in the glow of the setting sun exhausted though elated. But the first day had claimed one casualty. A man from Vermont had struggled with the altitude and didn't pull in until a bit after dark. His headlamp illuminated one of the group members who had stayed behind to encourage him on. Knowing there were bigger and more difficult days ahead, he opted not to go on and skied back out with the hut hosts after the group left. Five more huts to go. 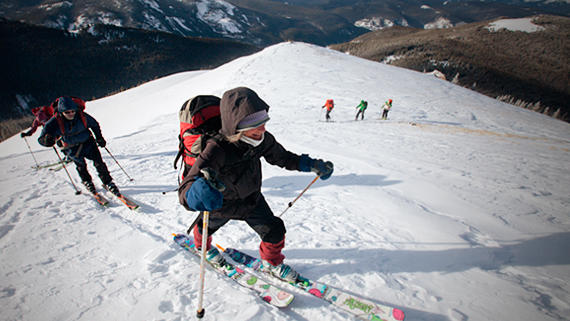 That second day, we pushed up past tree line, where our view transitioned from the boughs of needle-laden evergreens and the white bark of aspens to a sparse ridge line. The landscape expanded all around, causing us to lose our breath even as we tried to catch it. After each ridge or pass we'd strip off our climbing skins, convert our skis from uphill mode to the more familiar, and enjoyable, downhill mode and ski into the valleys and ravines toward the next hut. Each night, as we spotted the host hut—and welcome sleep—in the distance, we'd breathe a collective sigh of relief, which turned to anticipation as the smells of a warm dinner reached our noses. The fourth day was one of our longest and brought the most weather. After days of bluebird skies and sunshine, a light snow had started to fall the night before, and a beautiful misty morning revealed itself at daylight. The arrival of a fresh layer of snow promised soft powdery turns to come later. From the hut, we climbed a few hundred feet to crest the ridge just below the 12,000-foot mark and again stripped off our climbing skins, before delving into the powdery bliss.

Conditions like this are almost exclusively available deep in the backcountry, away from the bustling crowds jockeying for position on the chair lift to get those first runs down the groomed corduroy. This is why I ski, and more importantly why I ski tour."

Conditions like this are almost exclusively available deep in the backcountry, away from the bustling crowds jockeying for position on the chair lift to get those first runs down the groomed corduroy. This is why I ski, and more importantly why I ski tour. Yes, it has its challenges: First, we had to ski there—no lifts serve these slopes. We had to stay alert for obstacles like snow-covered rocks and logs, not usually found at resorts. Finally we had our large backpacks on, which added a new dimension of weight and momentum to our turns as we careened down the raw terrain.

Which is all to say, it was glorious. Ear to ear grins, whoops, yelps, high-fives punctuated the group as we converted our skies from downhill mode back to up hill to gain the next ridge. We all took a moment to don our windshells, and some even grabbed their goggles in preparation for serious headwinds. We pushed over the 12,500' Elk Ridge and leaned hard into the wind to avoid being blown onto our backs, or even possibly, off the ridge itself. Scraps of conversation were only audible up close and at full volume. Most of us opted for pointing and nodding. But we were undaunted, even as the wind continued to buffet us after we'd crested the ridge and hit the tree line, where, finally, enough protection was afforded to allow us to stop for lunch. Congratulatory handshakes and pats on the backs were passed around as we nourished ourselves and got ready to get back on the trail. 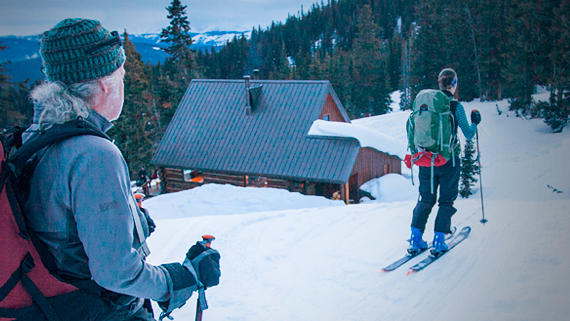 On our last day we descended down into the basin that contained the back bowls of the Vail ski area. The snow that had fallen just two days before was still in prime condition, and we were rewarded with more deep turns before ending our trip, exhausted and thoroughly content. After completing the climbs and traverses that comprised the majority of this trip, we all had a new respect for the back country. Downhill skiing might have the speed and grace, but for raw energy, nothing beats the ascent. And, of course, it makes those precious few moments of gravity-assisted, slope-carving in deep powder all the more spectacular. Read the Gear Guide here!