Yoni Geffen, executive director and co-founder of Adventure Forward, believes that the best lessons are learned outside. And the middle- and high-schoolers that participate in his program are quick to agree. Read on to see how Geffen is shaking up classroom norms by tackling life lessons in the great outdoors.

“It's not an adventure until you face a bit of adversity," says Yoni Geffen, executive director and co-founder of Adventure Forward, a nonprofit based in Denver, Colorado. He's talking to a group of teenagers, who, like their giggling, selfie-taking compatriots the world over, appear to not be paying attention. What might not be visible to observers, maybe not even apparent to the teens themselves, is that on some level, Geffen's lesson is being absorbed. By the time the adventure and outdoor education program is complete, Geffen and the rest of his Adventure Forward team will see it in the way each student starts taking initiative, solves problems and demonstrates confidence. And for Geffen, that's the entire point. 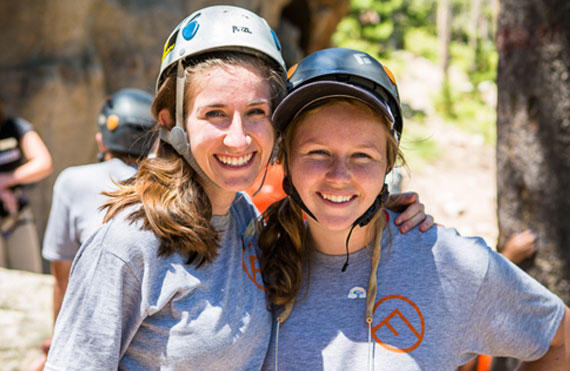 It was the culminating weekend for one of this summer's Adventure Forward sessions—a series of outdoor programs blending academics, the outdoors and, as you might expect, some adventure. On this particular trip, 45 students and 12 Adventure Forward corps members spent a night camping at the Genesee Experiential Outdoor Center near Evergreen, Colorado, with the rest of the weekend packed full of adventure: a hike to nearby Upper Maxwell Falls, an afternoon spent climbing outdoors, and a morning spent conquering a ropes course on Sunday. In 2011, Yoni Geffen had been teaching in the Denver Public School System for two years, and wanted to better understand his students outside of the classroom. This led to a small climbing club that ran throughout the year, but the club wasn't reaching the scale and depth that Geffen wanted. So, he started Adventure Forward in 2013 to give students from low-income and under-resourced schools, outdoor-based, experiential learning opportunities.

Adventure and the outdoors are a natural classroom and vehicle for teaching."

“Adventure and the outdoors are a natural classroom and vehicle for teaching," Geffen says. “Students learn risk management, self-efficacy, progress monitoring and more. Outside of the traditional classroom setting, there is a depth of reflection and making connections between what's actually being learned and applying them in real-life situations." A critical part of Adventure Forward's program is reflection; each student journals about his or her objectives during the pre-brief, as well as after, to assess whether or not his or her goals were reached. Each summer session ends with an exit interview. A sleepy yet excited energy filled the bus Saturday morning, and as it approached the mountains, the students began to look up from their phones. Upon arriving at their base site, half the group went on a hike, while the rest began an outdoor climbing session. Despite the heat, complaints were few and far between. Geffen and his team made sure to brief the students the week prior, as well as the morning of, so they'd know what to expect. Of course, that didn't mean there wouldn't be challenges—hence Geffen's speech on adventure and adversity.

Many of the students had been climbing indoors and hiking before with Adventure Forward in the previous weeks, but this was a full day of new adventures—a half-day spent climbing outdoors, as well as a three-mile hike to a waterfall. The day was hot, too. "They'd been out in the sun since 9 a.m. and it was high '80s," Geffen says. "It was a neat opportunity for them to apply some of the skills and utilize the experiences that they have had in the past few weeks and apply it here." After an exhausting but exciting day of outdoor excursions, the students were ready to set up camp. Backpacks loaded with donated tents, sleeping bags and other gear, the students started following the trail toward their campsite, arranged in groups along a wooded path. There was just one problem—one of the sites was nowhere to be found. The teens and their corp members hiked for another hour or so, searching for where to lay their weary heads. Eventually, Geffen saw them trudging back to the main site, having lived through his aforementioned mantra. 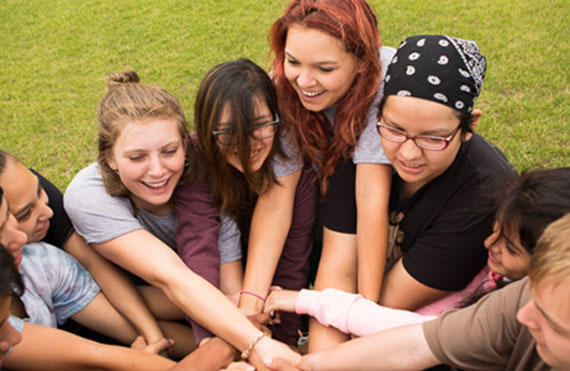 “These kids had been walking for an hour or so, after a long day of hiking and climbing. They came back and yet they were still in pretty decent spirits—there wasn't a single complaint from one of them" Geffen says. After weeks of facing challenges in the classroom, on the climbing wall, and in team-work exercises, a lost campsite was nothing. The students promptly took their own initiative to set up camp near the first group. By the time dinner concluded, the group that had set a goal of taking a leadership role was setting up a round of games for the entire team to play. Everyone got involved, and students who during the week tried to blend in to the lockers were the heroes. The teen who won the game—a shy boy who often faces challenges in the academic world—was lifted onto the shoulders of his peers, and marched around the now rowdy campsite, a leader and winner in their eyes and his. As Geffen boarded each of the buses that would take the students back to civilization, he was met with a flurry of questions. "You would expect that at the end of our camping trip, students and corps members would be exhausted or burnt out," Geffen says. "Instead, I was met with smiles, laughter, and the same question: Can Adventure Forward continue into the school year? If AF can get that response from 45 middle- and high-schoolers after 30 hours straight together, I know we're on the right track."