While there's certainly appeal to venturing out to see the world, few things are as rewarding as re-discovering the wonder of your own backyard. Alex Strickland does just that on a father-son fishing excursion in a place seemingly untouched by time — the Ozarks. 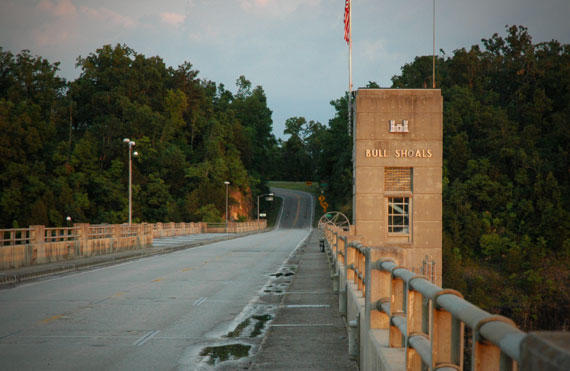 The rutted hills of northern Arkansas's Ozark Plateau are the closest thing the continental U.S. has to a land that time forgot. But standing in waders filled to the thighs with the icy water of the White River on a winter morning, I'm more acutely aware of my father's mirth at the sight of me staggering like a drunk on numb feet than I am to the "place out of time" factor. Not 30 seconds ago, he'd warned me to be careful. This is what comes of a young man ignoring Dad.

The White River—now interrupted by a series of dams that have created jagged reservoirs with thousand-mile coasts and monster bass—courses through the Ozark Plateau, slicing into the soft limestone bluffs and filling anglers' creels with blue ribbon brown and rainbow trout. It also passes through the heart of a culture that developed in something like isolation, protected or held hostage, depending on how you look at it, by geography that defies logic—drainages running in every direction, countless hollows and hills and forests of hardwood trees and thickets too dense for a man to walk through.

The White River—just "the river" in my family—ran behind our cabin, and when Bull Shoals Dam's eight massive generators were shut down, we'd wade out into it, working through a series of fishing spots that demanded increasing skill. Across the river was a deep, still pool where a clumsy spin cast with a hook full of canned corn could nab even a ham-fisted kid enough hits from newly stocked fish to stay interested. Dad would walk me up onto the island that separated the slack water from the main current and point out the slow-circling shadows of huge browns that were too wily for even the most experienced caster's fly. 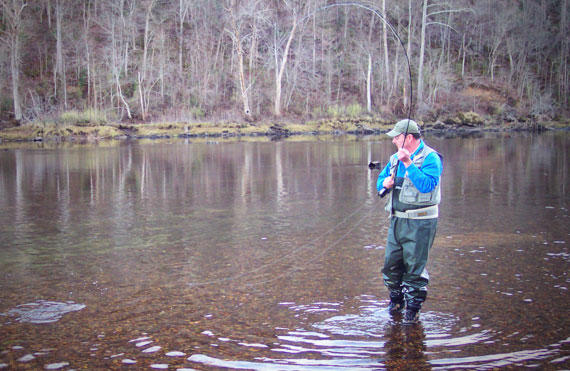 A few hundred yards away was a set of shoals bisected by a deep channel. It was here that a clumsy fly cast, angled between ten and two o'clock, could rid itself of kinks. Occasionally a big fish would get greedy and take the bait. But it was a wide section of shallow, quick water that you could see from the back porch that held the biggest prize.

We called the fish Walter, a nod to the 1981 drama, "On Golden Pond." When the afternoon light got low, just before the thick fog started rolling down the river, you could see the giant trout gently swimming against the current in the shadow of an old cottonwood snag leaning over the river. I've never been talented with a rod in hand, but my dad knew he had a shot at that big guy.

That is, he would have a shot if his son would quit slipping on the moss-covered rocks and splashing around like an idiot. I sloshed my way back to the bank and toddled back to the house for a hot shower and dry clothes while he started working a wide circle around Walter, steadily closing on the big brown. From where I sat watching him close in I could see straight across the water to the hollowed-out caves in the high bluffs. Old timers said there were Confederate salt-peter mines from the Civil War on those bluffs. Everyone agreed there were mountain lions.

But far below there was a fish—turns out it wasn't Walter after all—and when I heard a hoot and saw the rod bend I knew it was hooked. 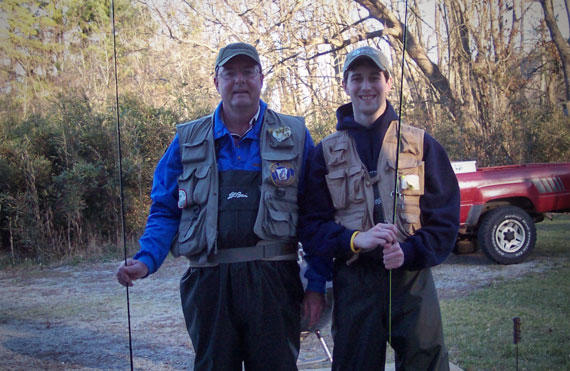 But far below there was a fish—turns out it wasn't Walter after all—and when I heard a hoot and saw the rod bend I knew it was hooked.

I don't get back to the Ozarks much anymore. The region's remoteness keeps its outdoor delights well hidden, but also means travel from across the country is a big commitment of time and money. And while new policies from the Army Corps of Engineers have drowned out our old fishing holes, the higher river flow makes float trips possible all the time. And of course, if the urge to wade in starts to overwhelm there are plenty of other options nearby, including the nation's first Wild and Scenic River, the Buffalo. On the occasion I do find myself back on "the river," I try to wet a hook at least once with my dad, who remains an enviable fisherman — good enough, even, that I try to not to ignore his advice.