The first time I ever clipped into skis, I was immediately blown backwards into a stream by a howling Scottish wind. 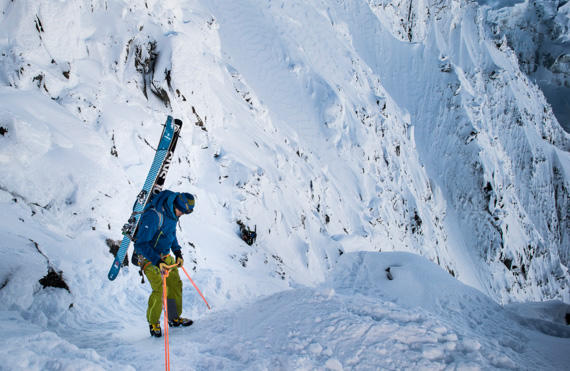 I'd spent the previous night shivering myself to sleep in a rented caravan in Aviemore, trying to ignore my Dad's attempts to tune a portable TV with a useless aerial. I'm pretty sure he had to defrost me the following morning, before taking me out to teach me to ski. My first run on the beginner slope must have felt like an eternity to my dad. Indeed, I should have been miserable, with the Scottish damp whistling through my inadequate gear at 50 miles per hour. But I couldn't get enough. Without knowing it, on that gusty Saturday in 1987 in Aviemore, Dad had helped shape the rest of my life.

Without knowing it, on that gusty Saturday in 1987 in Aviemore, Dad had helped shape the rest of my life."

Shortly after that trip he shared a video of ski legend Glen Plake jump-turning his way down the steep sides of the Chamonix Valley and inventing "extreme" skiing as he went. Having conquered the Scottish slush, I figured that Plake and I were kindred spirits, part of the same movement. And I spent the next 28 years trying to prove it. That's how I ended up staring down the gut-churning drop of Couloir Des Cosmiques in that very same valley where Plake made history decades prior.

While I might not have Plake's raw talent, I did have an advantage in my companion, steep skiing specialist Ben Briggs. We'd be taking on another first for me as well—rappelling with skis. As the convergence of two of my greatest passions, skiing and climbing, this trip in many ways marked a pinnacle moment in my life. It was also a ton of pressure. Even with 28 years of experience behind me, and an expert next to me, I was terrified of screwing up the most exciting thing I'd ever done.

Falling is Simply not an Option

From the top of the couloir we looked out on to a perfect cloud inversion, with the Cosmiques Arete towering above us and Mont Blanc's many glaciers meandering far below. Our entrance was so steep I couldn't see the descent route, but conditions looked perfect—blue sky above, and fresh, deep snow below—which just heaped more pressure on me to perform. I gingerly shuffled my crampons down to the rappel anchor and followed Ben down the rope into the enormous backdrop, baby-stepping around a corner until the couloir revealed itself, 800 vertical meters shearing the air at 45 to 50 degrees. The top section of the trail—the very steepest—was closer to sheet ice than snow. To make matters worse, my rope had run out, leaving me with 30 meters to down climb, at a 50-degree angle, with no protection beyond crampons and a single axe, in a no fall zone. My dad may have pulled me out of that Scottish stream, but there was no chance of him dragging me out of the crevasses that were now gaping half a kilometer below me.

To make matters worse, my rope had run out, leaving me with 30 meters to down climb, at a 50-degree angle, with no protection beyond crampons and a single axe, in a no fall zone."

I took a breath and tried to force the thought of a slip—and its grisly consequences—out of my mind. With an iron grip on both my ice pick and nerves, I settled into the kick-and-swing rhythm of foot and axe placement. Soon, the snow began to soften, allowing me to swap the awkward crampons for skis. The steeply pitched slope was suddenly more playground than a gateway to the abyss.

The knee-deep powder, protected from the wind by the couloir, relinquished its gravity-defying grip on the mountainside, sloughing off in sheets as we sped past. Great wafting clouds of it, displaced by Ben, hung in the air, enveloping me as I hurtled down the slope. It was freeride heaven. 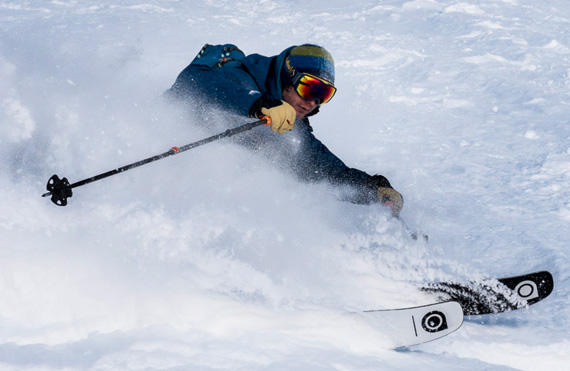 As we headed for the exit onto Glacier des Bossons, the cloud inversion wiped out most visibility, leaving us to negotiate the tight paths between crevasses nearly blind. I barely noticed, still in ecstasies over the flawless descent. Given my distraction, it was probably for the best that by the time we hit zero visibility, we were trudging along a relatively safe path, skinning in contented silence. I'm sure my Dad prefers not to think about me running out of rope on a sheer, icy slope, and perhaps it's best if he doesn't remember the Glen Plake footage his son has been aspiring toward for most of his life. What I hope he does remember, with fondness and a little pride, is that it all began in a caravan nearly 30 years ago, in a violent Scottish storm.