Explore Support Pages
What happens when a leisurely hike with man's best friend turns into a chance encounter with one of nature's top predators? Read on to find out.

There has been one time, and one time only, that I accepted death. My friend Ali and I stumbled upon a mountain lion, or rather her two dogs did. 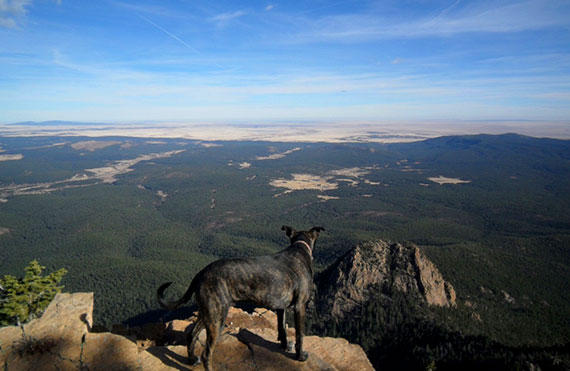 Friends from the outdoor magazine where we worked, we had just rounded a bend on a single track ridge a mile and a half up the Tesuque Creek trail, near Santa Fe, New Mexico. It was nearly dusk, around 7 p.m., on a warm summer day. The breeze had shifted, and the dogs (Rio, a German Shorthaired Pointer-Rhodesian Ridgeback, and Odin, a Boxer mix) took off howling after a new scent toward the creek bed 20 feet below. Rio sprang. Odin yapped. Something growled. "Sounds like they treed something," Ali said, meaning they'd scared an animal into a tree. "Reeeeeeooh, Oooooodin, let's go!" she called. The growling grew louder. Odin's barking went up an octave. "That doesn't sound like a squirrel," I said, scanning the treetops. Then I saw it: a colossal, golden-red, eight-foot-long lump of fur with green eyes, arched upward on a tree branch. I thought it was a deer. That didn't make sense, but then it dawned on me. "Oh my god, Ali, that's a mountain lion!" It looked like a lioness from the zoo, except there was no plexiglass wall between us. We looked at each other and then did, ironically for two outdoor journalists who should know better, exactly what you're not supposed to do: We ran like hell. 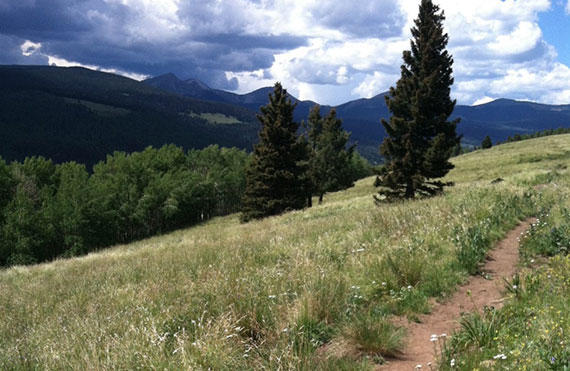 “Rio! Odin! Let's go!" we both screamed, over and over again. The dogs wouldn't stop barking or clawing up the tree. Fifty yards down the trail we stopped, white in our faces, shaking, and out of breath. “I don't know what to do," Ali said, “should we go back for the dogs?" “No way, run!" I gasped. We took off again, jumping over rocks, boulders, wooden beams, half-buried roots. My Asics shoelace untied but we didn't stop. The dogs chased after us and we all ran harder. “Talk loudly, keep talking!" Ali yelled up ahead. “OK!" I yelled back, “How big do you think that was? At least 300 pounds, maybe 350!" “Keep going, keep running!" she yelled. Beads of sweat from exertion, adrenaline, and fear dripped down my temples. Invisible knives scraped out my lungs and my mind spun in circles, it could be stalking us from the treetops! Oh, God, that's a big rock. Run faster! Run faster! Chancing a backward glance, I expected to see a flash of golden-red before three-inch claws ripped out my throat. We ran at a full sprint (or what felt like it) for about 10 minutes back to Ali's Volvo. We opened up the hatchback, let the dogs in, and slammed our doors shut. Then we started laughing and swearing.

The day after, I called Peter Romero, the former building manager where I worked and a mountain lion expert. I wanted to find what reality of the threat had been. Romero, who lives in Pojoaque, New Mexico, is a professional hunting and fishing guide and helps with cat control in populated areas. Romero told me that in his 20-year career he has never seen a lion that he wasn't pursuing himself with a pack of trained dogs. “You are lucky to have seen the lion, but it was a very dangerous situation," Romero said, noting that mountain lions generally attack from behind. Most people don't actually see them before it's too late. “You're pretty lucky you ran away from a mountain lion and it didn't attack you," he said. Romero likened lions' behavior to that of house cats who kill mice for sport. “Running was the worst possible thing you could have done," he said. If the lion hadn't been in a tree with dogs barking at it, our movement might have triggered it to attack instinctually. 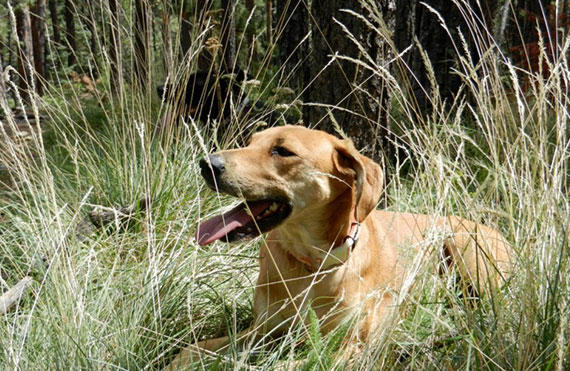 “You're supposed to hold your ground, scream, make loud noises, ring a hiking bell, and even urinate," said Romero. “Human scent is the most threatening thing to wild animals." Lucky for us, Ali's dogs were just the right companions for our predicament. Turns out that Rhodesian Ridgebacks, part of Rio's heritage, are a breed specially selected to hunt African lions. Odin happens to be built like a prizefighter. Romero said the fact that our dogs held the lion at bay gave us enough time to escape. “I'm serious. The dogs probably saved your life." It didn't hit me until Romero pressed home just how dangerous the encounter had actually been. I love being in the wild, even if running into big game is a possibility that's always in the back of my mind. But the fact that we ran into a mountain lion—and survived—was a gentle, yet firm reminder of just how small I am, and just how wild nature can be. It was a reminder not to get complacent in the outdoors. The night of the lion encounter, we made it back to Ali's house and cracked a couple of Heineken tallboys. I dialed 911 to let Fish and Game know that there was lion loose near town. And finally, at 3 a.m., when I relaxed enough to fall asleep, I dreamt I bought two dogs, a canister of mace, and hit the trail again.

3 TIPS FOR HIKING WITH DOGS

Make sure to carry enough food and water for your pup. Not enough room in your backpack? Invest in a small side pack that your dog can wear across its body to haul a water bottle and treats.

2. Bring your leash and know the rules of the trail

There's nothing worse than a hefty ranger's fine for letting your dog roam where it shouldn't, or off a lead when it's required. Be sure to study up on the rules before you go, and visit your local government offices to obtain the proper permits or tags if needed.

3. Put a bell on your dog's collar to ward off big animals

Thread a hiking bell onto your dog's collar if you let it off leash. This will ensure large animals in the area are aware of your presence (and will likely steer clear of you). The added bonus: you'll know where your dog is at all times because you'll be able to hear it.