One late September afternoon, I huddled with a handful of fellow hikers on a steep and remote trail in the Kugti Wildlife Sanctuary, in the Indian Himalayas.

We were two days into an ambitious trek up to the Kugti pass—a narrow channel normally used only by local shepherds to cross over the mountains that separate the lush valleys of the Chamba district from the barren desert region of Lahaul. And we had a big problem. Early on, we'd hired an experienced guide, Tilak, to lead us through the pass. Looking back, we should have trusted in his arithmetic. 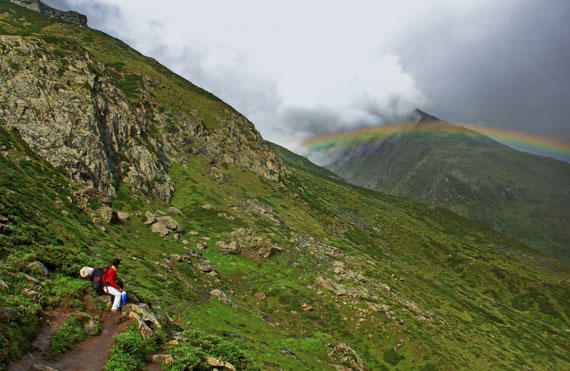 At 16,000 feet, the pass was the lowest access point in the range, but still well within the danger zone for altitude sickness. To make matters worse, due to the scarcity of campsites in the area, we'd decided to take only three days to ascend from our starting point at 8,000 feet—a per day gain that was over the 2,000 feet recommended by experts to avoid becoming ill. And now the mountain had claimed its first victim, though she was loath to admit it. She was the reason for our trailside huddle. We had noticed her labored breathing as she slowly trudged up the steep slope toward the 10,000 feet mark. Before long she'd present a danger to the rest of the group, who'd have to support her up and down the trail. As much as we didn't want to cut her trip short against her wishes, it was time for her to turn around — if anything, for her own safety. Most hikers would understand the degree of risk, but when we regrettably handed down our decision, she burst into tears and refused to budge. “I came to the Himalayas to hike," she said as she cried, "and I can't go back now." After more tears and shouting on her part and desperate reasoning on ours, our struggling friend was finally persuaded to place her (and our) safety above her itinerary, and we were free to continue on. It was an episode none of us would soon forget, especially given the events that were to occur two days later. After safely seeing her off of the mountain, we decided to soldier on and make the most of the journey. There was the rolling lushness of the valley to revel in, after all. Upon crossing a glacial stream we entered a landscape painted bright green by fresh spells of rain. Waterfalls lined the mountains' slopes, and patches of snow glistened on faraway peaks. The range and vividness of the colors would have been surreal, had not the bone-chilling cold and drizzle kept us firmly rooted in reality. I think we all regretted not packing more condition-appropriate gear. 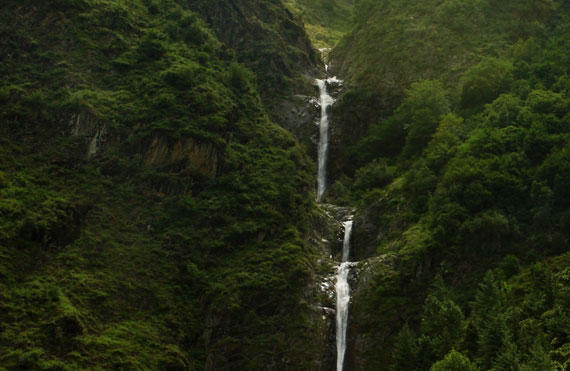 Entranced by the scenery, though irritated by the elements, none of us were prepared for what happened next. Having apparently materialized from nothing, a yogi came bounding up the trail toward us, wearing nothing but a cotton cloth around his waist and a flimsy pair of slippers. He stopped for a word, and we learned that despite his lightweight attire, he'd made it all the way to the mountain pass before being forced to turn around due to his inadequate footwear. But now, back in the valley, he acted as though he were enjoying a leisurely saunter in some tropical paradise. I asked him, “Aren't you freezing?" “No," answered the yogi, flashing a smile. We stared, dumbfounded, as he simply said,“Mind over matter!," and was on his way. How the yogi and I could be experiencing the same physical stressors and react so differently is something to this day I can't quite parse, but his words would come in handy sooner than I expected.

How the yogi and I could be experiencing the same physical stressors and react so differently is something to this day I can't quite parse, but his words would come in handy sooner than I expected.

Day four had us leaving behind the verdant valley floors for icy, scree-ridden, near vertical slopes. By the time we hit the three-foot-wide pass—and the 16,000 foot mark—an hour after sunrise, we were all a bit shell-shocked, not to mention losing steam. Behind us, the lush greenness beckoned like an old friend. Ahead of us a barren landscape of raw, tortured rock soared. Beneath us was a mangled mass of glacial moraine, strewn with boulders and cut by glacial channels. It lay before us like an abandoned construction site. Descending over loose soil and ice, we carefully navigated the steep slope, grinding our knees into fine powder in the process. At the base of the glacier we took a few minutes to appreciate our collective minuteness. Nothing could have prepared us for just how insignificant we felt surrounded by eons of geologic history. The trek up and then down into the moraine had exhausted us. It was nearly noon when Tilak told us that our campsite was blessedly close—"just around the corner," in fact.

“You guys take your time and hike slowly," he said, gathering the porters to himself. "We'll go ahead and set up tents and get lunch ready for you. The campsite will be on your left—you can't miss it." The nimble-footed mountain goats that they were, Tilak and his men disappeared within minutes of leaving. After a brief rest, we set out in anticipation of the food and relative comforts of home waiting up ahead, just around the next turn. Or so we thought. An hour's hike revealed no Tilak, no campsite. Assuming we had to be close, we split up, each of us falling into our own pace. Two more hours passed, then another two. I trudged on alone, cursing the afternoon heat, begrudgingly marveling at the fact that we could experience such drastic temperature swings, all in one journey. The terrain offered little relief in the way of distraction. In fact, it grew bleaker by the minute—all harsh rock, hard ground and peaks like broken teeth. Between the seemingly endless valley and the invisible trail, the chances that I was lost were starting to increase, and I was more than a little nervous. With the inspiring views long gone, it was only fear of being caught alone out here at night—and the menacing rumble of nearby rock avalanches—that kept me marching through this hellscape. As I grimaced and sweat beaded along my hairline, the sprightly yogi from the valley sprang to mind, along with his adage. “Mind over matter," I said to myself. Then I repeated it over and over. Soon, it became a mantra. The hours were still long, the ground still hard, but the yogi's words gave me a way of creating some sort of rhythm and rhyme to the trudge. Beyond the repetition, there was also hope in my own ability to drown out the shrieking physical complaints—hunger, exhaustion, heat—and will myself another few steps farther. I was thankful for my unlikely source of inspiration, because by now, several hours into the hike, it had become apparent that Tilak lacked any actual experience with corners. Our campsite would be around none of the ones we encountered over a nearly 12-hour trek involving 3,000 feet of ascent followed by a descent of the same. 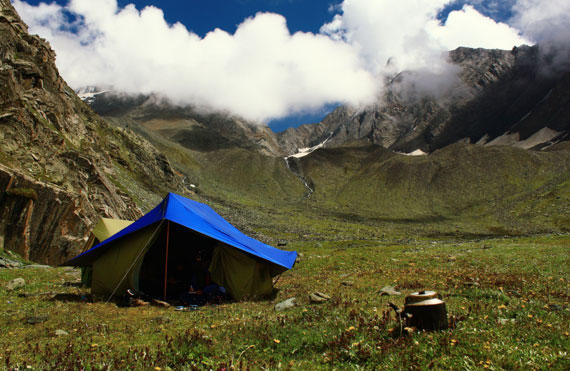 Towards the end, even the bodily exhaustion took second place to the mental agony. Thankfully, regrouping with my fellow hikers offered some respite to my worried mind. Our first words to each other were, "I hope the campsite is close by!" Every turn of the trail promised us rest and refreshment. Each one disappointed bitterly. Our bodies were aching, sure, but the real challenge was in playing referee between hope and despair as they waged war for our spirits. The yogi's words became a battle cry in my head. We finally arrived at and collapsed upon our campsite late in the evening. A more stalwart mind—the yogi's perhaps—might have reflected on the day's challenges and triumphs, but I was completely sapped — physically and emotionally. I was simply grateful to the barely clothed sage who'd helped me through this particular gauntlet. If I've gained any small amount of wisdom from this ordeal, it was appreciation—for nature, certainly, but more so for the strength and determination found in the human spirit. We marvel at the mountains, we marvel at the scenery, but we often forget to marvel at our own power to overcome, despite the obstacles. A power that rescues us from the land of "impossible," allowing us to experience the world in all its terrible and wondrous forms.