We all have off days. While Daniel Wildey drug his feet along the trail, his girlfriend had a different kind of experience in mind. Join them in the Italian Dolomites for the big reveal that snapped Wildey out of the humdrum gloom and into an unforgettable experience above the clouds.

Alice has always been the more adventurous one of the two of us — willing to give anything a try, regardless of the conditions. Although I'm supposed to be the climber of the relationship, many a time she's scrambled past me while I was hanging on for dear life. Maybe experience has made me a fair-weather adventurer. Alice, on the other hand, is a fountain of enthusiasm. 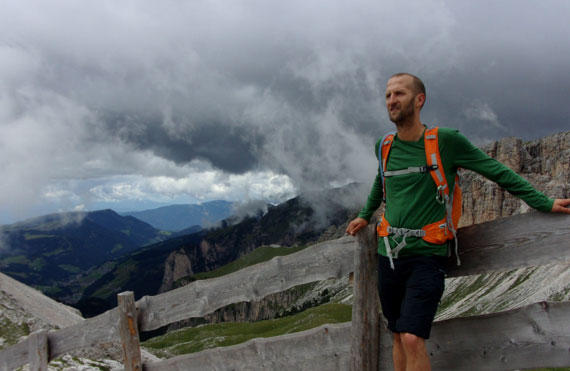 And as much as I love that about her, it's also a curse. On this occasion, I was trudging up the steep path to Sas Ciampac in the Italian Dolomites, damp and chilly and surrounded by thick clouds which obscured the soaring limestone spires all around us. I muttered under my breath as we walked, a miserable contrast to Alice's joyful demeanor. We were on a three-month European road trip, and although we had a lot to pack into that time, we simply had to return to the Dolomites. Sas Ciampac was supposed to provide a relatively quick and easy summit from which to take in the whole of our beloved Alta Badia in a single vista. We'd awoken in our makeshift camper van on the Campolongo Pass in Alta Badia to see that summer had abandoned us. Alice and I met among these mountains four years earlier, and we knew what beauty awaited us on this nostalgic trip. But instead of the imposing jagged peaks we expected, we saw nothing but drizzle and fog, which dampened our breakfast as well as our spirits. 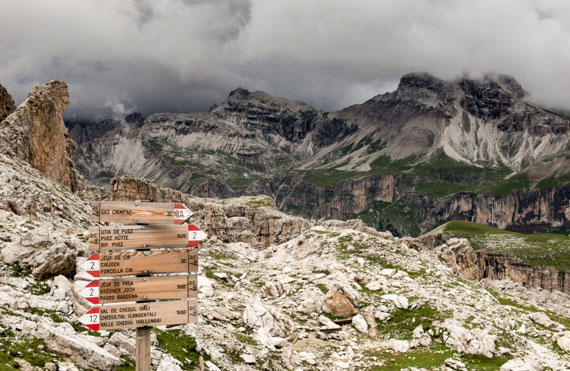 Was it worth the climb to 2600 meters if there was no view at the end? Normally the bad weather would have been all I needed to call it a day and set out on a cappuccino-and-strudel crawl. But Alice's buoyant spirits weren't going to let me off the hook today. Unflappable as ever, not to mention a little devious, she'd devised a secret plan to get my feet on the trail and my mind out of the cafes. Alice's logic was simple, elegant, even. The hike begins at the end of a cable car route, and we already had tickets, so "we might as well" take the ride. The weather could clear at any moment, right? But her master stroke came when she pointed out that there was a place to get cappuccino right by the trail head. Like I said, elegant. Of course, this was only the beginning of Alice's trail-side machinations. The second phase of her master plan was along the lines of "We've already come this far...." And before I knew it I was committed to the journey at hand — and not by choice. Outfitted in waterproof gear, my thighs were burning and I still couldn't see anything beyond the gray. Realizing everything had fallen into place — in accordance with Alice's plan — I carried on, urged forward by Alice's abundantly positive outlook. It was then that we emerged from the murk and experienced the big reveal.

The clouds dropped. They were still swirling around us, offering windows on the enormous walls of the Sella Massif which lay across the valley, seeming close enough to touch."

The clouds dropped. They were still swirling around us, offering windows on the enormous walls of the Sella Massif which lay across the valley, seeming close enough to touch. The sheer faces and rugged pinnacles set off the ephemeral, floating cloud banks, creating the dramatic backdrop for a big reveal. It was as though the mountains had waited until we were perfectly primed by the miserable rain, and ideally located on the trail, to receive the full impact of their appearance.

I fully expected - and deserved - smugness from Alice. But she was as awe-struck as I was, and gracious enough to simply enjoy the moment. And the pay off was all the sweeter for having made the effort. It's a difficult lesson to learn—that there are special rewards for those that set out in the rain—and I suspect I'll never be one of those people. Thankfully I have one of them close by.