Ask most outdoor enthusiasts about the worst rain storm they've ever been in and you'll get a story from some long-ago trip about the water seemingly coming from above, below and beside — more rain than you've ever seen! 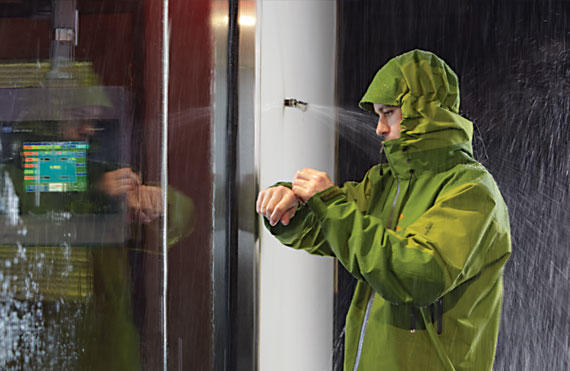 But in rain room testing labs around the world, the worst storm the GORE-TEX brand's fanatical quality testers have ever seen was probably this morning, right before they ducked out for a latté. Every piece of apparel designed with the GORE-TEX membrane, on any store shelf in the world, has a prototype that visited one of these rooms and was subjected to tests that represent the most brutal real-life conditions. And this is no college chemistry class you can sneak through with a D+ — it's purely pass or fail. “We want to ensure the garments perform according to our GUARANTEED TO KEEP YOU DRY™ promise, while still allowing our brand customers to have design freedom," said Gore's Michele Leckington. “The amount of water and duration of exposure varies for each test." The details are kept as closely guarded as a state secret, but the rooms are equipped to mimic the worst Mother Nature has to offer. An overhead nozzle releases three inches of water per hour, and is set high enough so that the drops have time to reach terminal velocity before striking the material. A pair of side nozzles simulate wind-driven rain. In total, the room's rain-making capability is a torrential 22 inches per hour.

Products for casual use have to pass tough tests suited to their intended function and likely duration of wear. Mountaineering and motorcycle equipment, however, get the full brunt of the room's punishment.

Chances are you're going to have more problems in the beginning as you learn. What's the saying? If you're not failing, you're not trying."

“The on-road motorcycle test is the most rigorous—a combination of overhead rain plus rain from a front nozzle to combine for approximately 6 gallons of water per minute for 30 minutes," Leckington said. “It's a tough test and the pass rate is only about 50 percent on the first try. And how does a garment fail? Any leak, big or small, found by specially trained testers means a manufacturer has to go back to the drawing board and re-submit an updated version with the problem fixed. “Some of the most well-known and innovative brands are the most likely to fail initially," Leckington said. “If you want to build an interesting and innovative garment—if you're really pushing the envelope creatively—chances are you're going to have more problems in the beginning as you learn. What's the saying? If you're not failing, you're not trying." Which is all to say, by the time you slip into a jacket or pull on a pair of pants with GORE-TEX product technology you can be sure of one thing: when it rains, they're not going to fail.