Explore Support Pages
Jenny Willden is not a natural-born runner. She'd be the first one to tell you that. She never expected to be addicted to the trail, but one moment, and one race changed that forever. See what made her a lifelong road running addict.

When the gun goes off, I leap forward. The air is crisp and the crowd of racers eager; they set a brisk pace as they pass brilliant fall trees along Park City's famous trails. My road shoes are no match for the loose rocks, and I slip more than expected, but I focus on the beat pounding in my earbuds as I count off the course's mileage markers. Not one to go into anything halfheartedly, I've set a lofty goal of finishing this half marathon in under two hours, requiring a speedy 9-minute-per-mile pace throughout. After all, I never thought I'd arrive at the starting line, let alone the finish, so why not go big? Let me be clear—I am not a natural-born runner. I was not blessed with the cardiovascular prowess for a sub-seven-minute mile, never understood the so-called "runner's high." But one event changed my relationship with running forever: a breakup. 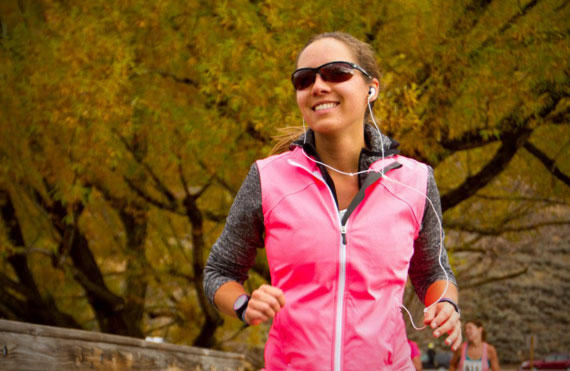 Bigger than a breakup

Kyle was a break from my type in every way: quiet, shy and funniest when he didn't mean to be. I didn't expect to fall for him, but when I did it felt like being 16 all over again. We shared a love of the outdoors and adventured by foot, river and bike through the wild. He taught me to rock climb confidently. I overcame my intense fear of heights by rappelling off tall cliffs with him and calmed my often anxious mind with yoga poses he taught me. But I also felt somewhat neurotic and uncertain in his company. He was critical to a fault. Over the months it wore me down: I was too high-strung, he said. My family was crazy, my outfits unflattering. He flung his barbs even in our most precious shared space—the outdoors. “You're too slow to run with," he said as we jogged around a nearby park. And it's true that I struggled to keep up with him on the hills, but his words grated on me. He ran ahead into the neighborhood, leaving me alone with my thoughts. Mortified by my pounding heart and shortness of breath, my confidence evaporated as I jogged back to his house. I soon noticed the lack of invites to run with him as he trained for a race. When I completed my first 10K, he failed to show up to cheer me on. I became so uncertain of why he liked me (or if he liked me) that I dared less, said less and eventually stopped doing the things that made me, me. Our year-long relationship dissolved one day over untouched omelets at my favorite diner. Coping and moping weren't in my skill set. A serial monogamist by nature, I'd always used new relationships as Band-Aids to mask the pain of a breakup. I never got over a relationship; I just covered the heartache with a shiny new love story. This time, however, I was determined to do things differently.

I realized then that running away from the pain was not the solution, but running through it was."

So I ran, ticking off the stages of grief, mile by mile: shock, anger, guilt, depression. On the day I hit anger, I beat my best distance by a mile. And when I finished, sweaty and exhausted, I felt something rise in my chest. It was hope—the seventh stage. For the first time in a while, I didn't feel powerless, but proud and empowered by what my body could do.

I realized then that running away from the pain was not the solution, but running through it was. And though I couldn't shake Kyle off in a day or week, by the time I finished that run I was determined to prove his criticisms wrong. I signed up for my first half marathon the very next day.

Each lung-busting hill chips a little bit more from me. I want nothing more than to stop. I'd completed runs up to 10 miles prior to the half marathon, but being a rookie I'd failed to factor in the mountain elevation, or even glance at the course map beforehand. As the course loops back toward town, however, I start to feel a cramp in my side. I force myself to keep running until I nearly collapse, and only then slow to a walk, cursing the peanut butter on toast I'd had earlier in the morning. The thought of failure terrifies me. He was right about me, I think. I can't run 13 miles without stopping. Maybe I shouldn't be here at all. 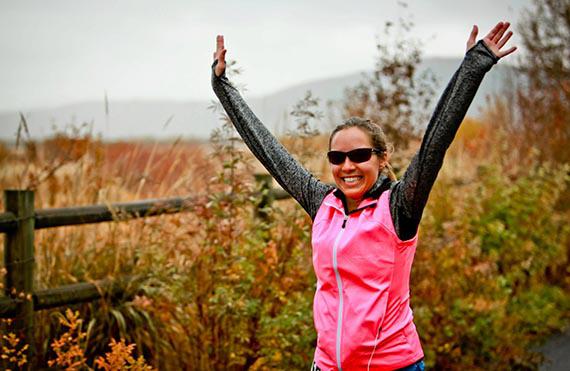 I had done everything right, never missing a training run, logging long miles before the sun rose, running more stairs and tracks than I could count. It's not Kyle in my head trying to defeat me. It's me. So when fear presses me to stop, I keep moving forward. The aid station at Mile 10 appears like an oasis, and I stop to sip Gatorade eagerly. I feel somewhat re-energized: my legs are fine, my stomach pain has calmed. As long as I can master my mind, I realize, my body can handle the rest. I start picking up speed, now taking on hills that would have sent me into a panic months ago. The course glides past ski condos toward the finish line. I see the sign for Mile 13. Just one-tenth of a mile stands between me accomplishing all the things both he and I believed I couldn't do. I sprint for the finish, crossing the line in 2:06. Perfect? No, but a victory in more ways than I can count.