My son came as a surprise. I was married at the age of 21 in May; the following December, my wife called me and told me she was pregnant. At first, I felt a sense of panic, but as the news really sank in, all my anxiety was overcome by excitement at the thought of bringing a child up in the outdoors.

The following August, my wife gave birth to our oldest son – Wyatt. Two years later, my son Easton was born and five years after him our last son, Layne came into the world. I didn’t grow up in a traditional hunting family, and my learning curve has been steep. Though challenging at times,  it has allowed the skills and lessons I’ve learned to sink in and take root.

I hoped that by the time my kids reached an age where they could tag along with me in the woods, I would be in a place where I could teach them from an expert’s perspective. As the oldest, Wyatt has been there for many successes and many hard-learned lessons. Through thick and thin, he has helped pave a path forward for his younger brothers as they come up through the hunting ranks. 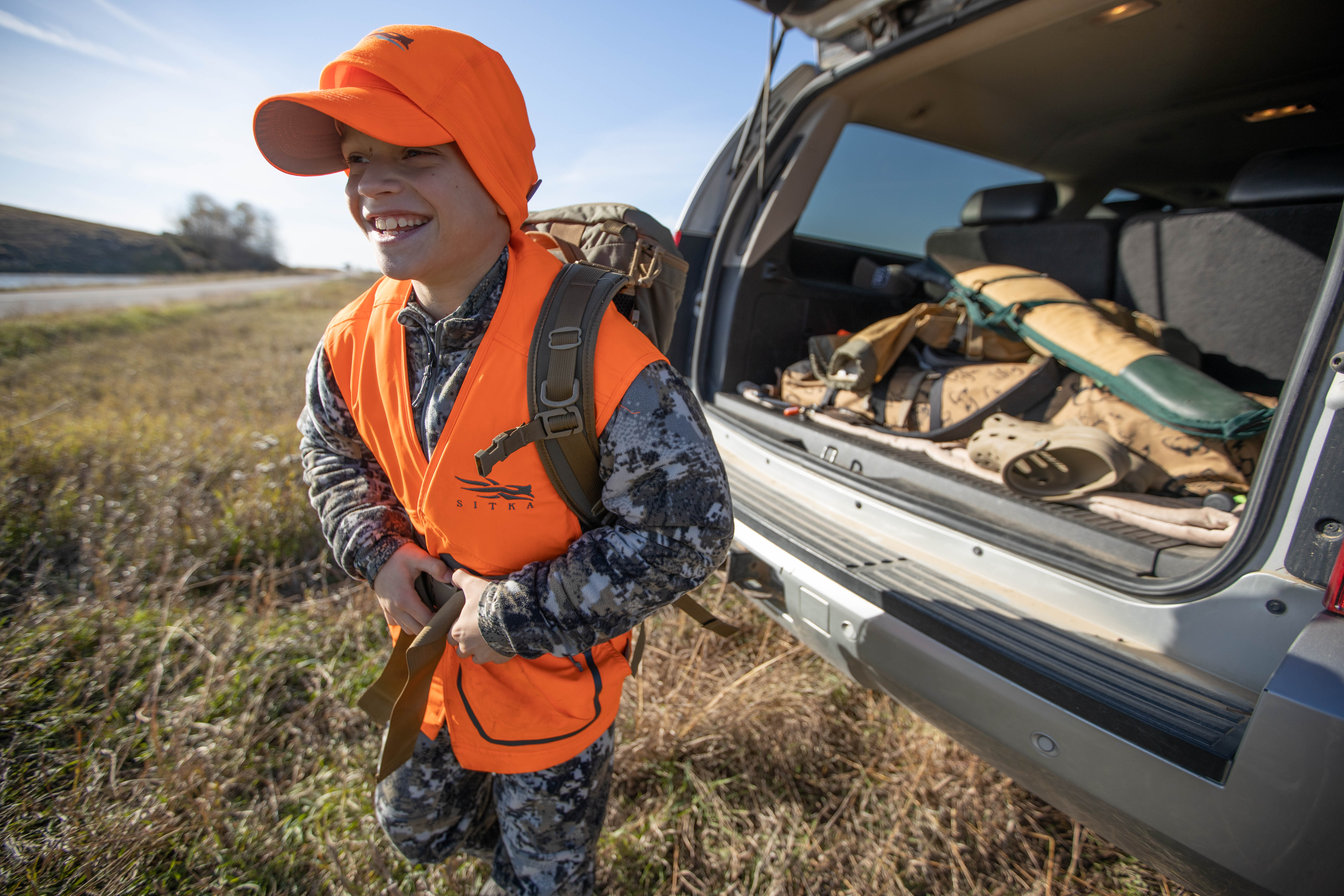 I introduced Wyatt to hunting around the age of two. I brought him with me to set and check trail cameras throughout the summer. With warm weather and no pressure to stay quiet or sit still, I was just in the woods with my boy and planting the seeds of a love for the woods.

When temperatures allowed it, I had him in my layout blind to hunt waterfowl. He was small enough to fit in the same blind with me, and I kept him comfortable with plenty of blankets and lots of hand warmers. Field hunting waterfowl is a perfect way to introduce kids to hunting.  During the slow times, he could run around and make as much noise as he wanted. It was much easier to get him to be quiet for short intervals, instead of sitting quietly in a deer blind for hours on end. Upon arriving home, we’d clean the ducks together. Wyatt was never afraid to get his hands dirty.

At four years old, I felt he was ready to go deer hunting with me. ‘Ready’ is loosely defined by knowing he understood what “be quiet” meant.  We hunted out of ground blinds so if he got antsy, his movements would be better hidden than if we were up in a treestand.  Ground blinds also cut down wind exposure, making it much more comfortable for kids. 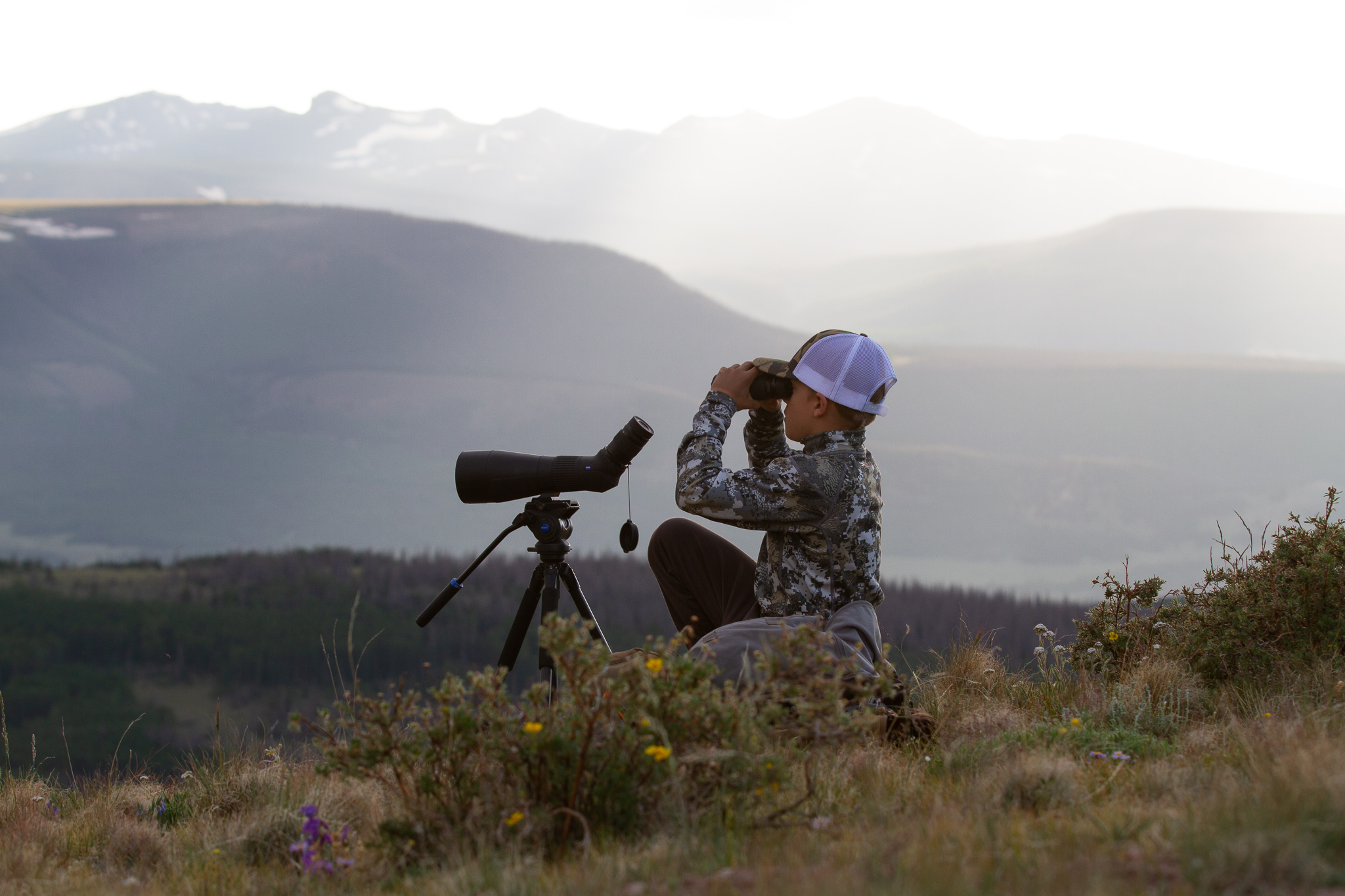 Keeping young ones engaged is crucial to stoking that fire for the outdoors. I tried my best to bring him to spots where there was plenty of wildlife to watch. I wasn’t concerned with setting myself up to shoot a dream buck, rather, I wanted to keep him interested while we were out.  Turkeys, squirrels, and waterfowl will keep questions coming from kids for hours.

I began exposing him to shooting around four years old as well. I took him to the rifle range where we’d shoot low-recoil rifles like .17s and .22s. As he grew more comfortable, he worked his way up to a .410, and eventually, a 20 gauge. I made sure not to force him into shooting a caliber he didn’t feel comfortable with.  Like anything, the more he shot, the more confidence he gained in himself.

When Wyatt turned six-years-old, I took him on a spring turkey hunt.  In Minnesota, youth hunters can buy a turkey tag at an early age, and we took advantage of the opportunity to be afield as active participants and not just as observers.  We hunted most of the season without seeing many birds. I hadn’t really done much turkey hunting myself, so Wyatt and I were learning side by side. Late in the season, we were finally able to bring two toms right into the decoys.  They came in hot and beat up on the decoy before Wyatt eased into the gun, squeezing the trigger on his first tom. I was so proud of Wyatt. 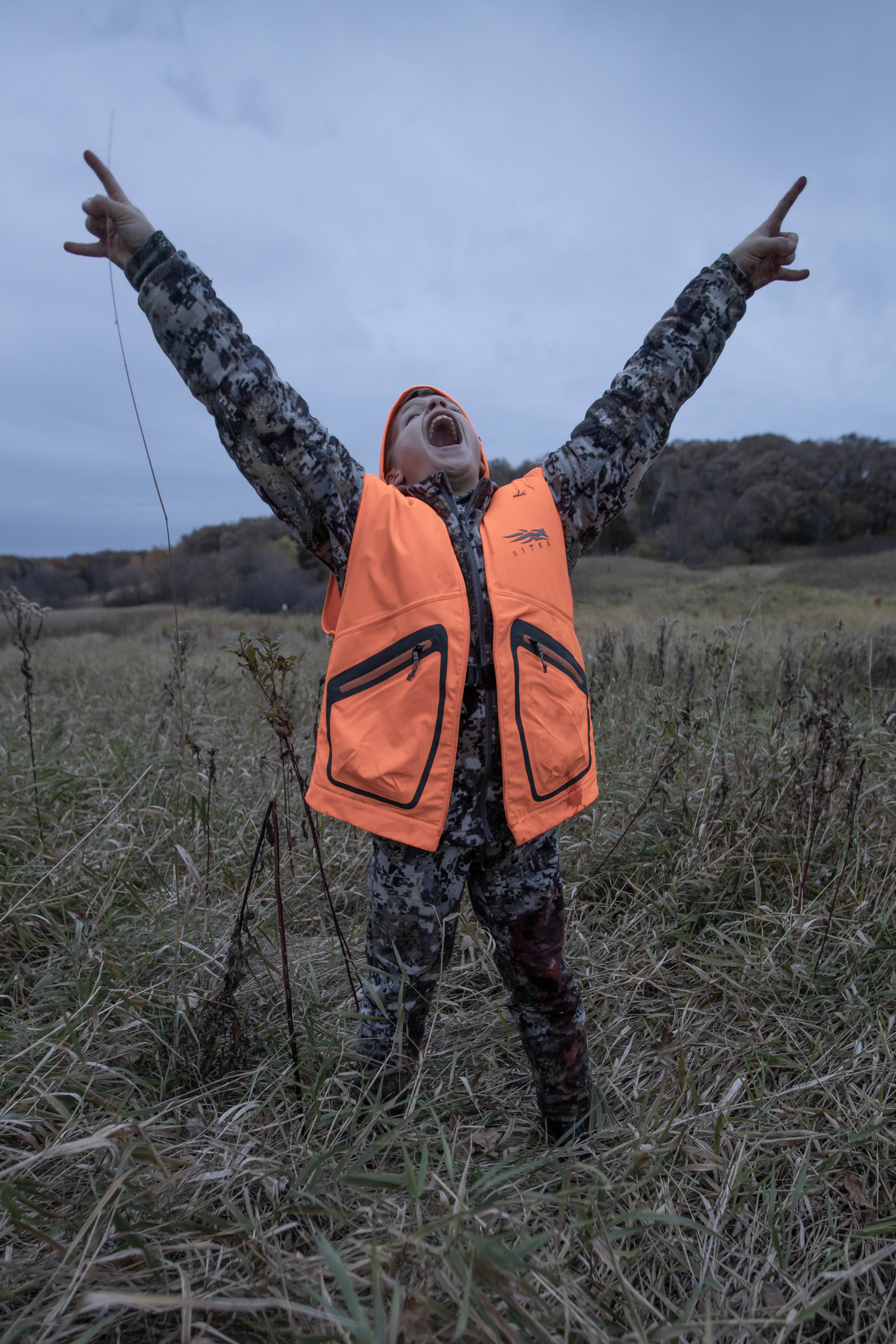 He was hooked, and a deer was next in his mind.  That’s all he could talk about, however, he wasn’t able to buy a license for a few more years. In Minnesota, a hunter must be 10 years old to hunt deer. His wait seemed to take a lifetime, but eventually, we were planning the upcoming fall with his name in the mix.

Once the Minnesota gun season arrived, we were in the blind together in pursuit of his first deer.  Limited to weekends, we opted for two all-day sits. We had some close encounters, but nothing panned out. We awaited the muzzleloader season with excitement, ready to try again.

A good friend of mine tagged out during the gun season and gave us permission to muzzleloader hunt his land. It wasn’t long into our first sit before we eclipsed the number of deer we saw during two full days of the gun season.

Wyatt was nervous and the deer kept moving. It took a while before he was able to take a shot. A clean miss. I filmed it with my phone and saw he shot right under her. Later that evening, he had a great opportunity at a small buck but missed that deer as well.  He was devastated, and as the sun set all I could do was encourage him and remind him how lucky he was to even have a shot at those deer.

I took Wyatt out of school early one day during the week.  We ran up to the same piece of property, but this time, we made an adjustment.  I decided it would be best to give him the closest shot possible. We moved to a stand that was right on a food source.  It was exactly what we needed to do. Before long, we had deer no more than 30 yards away. He settled in and calmed his nerves. A silence that seemed like forever was broken – smoke filled the air.  Wyatt connected with a mature doe, his first deer, but certainly not his last. 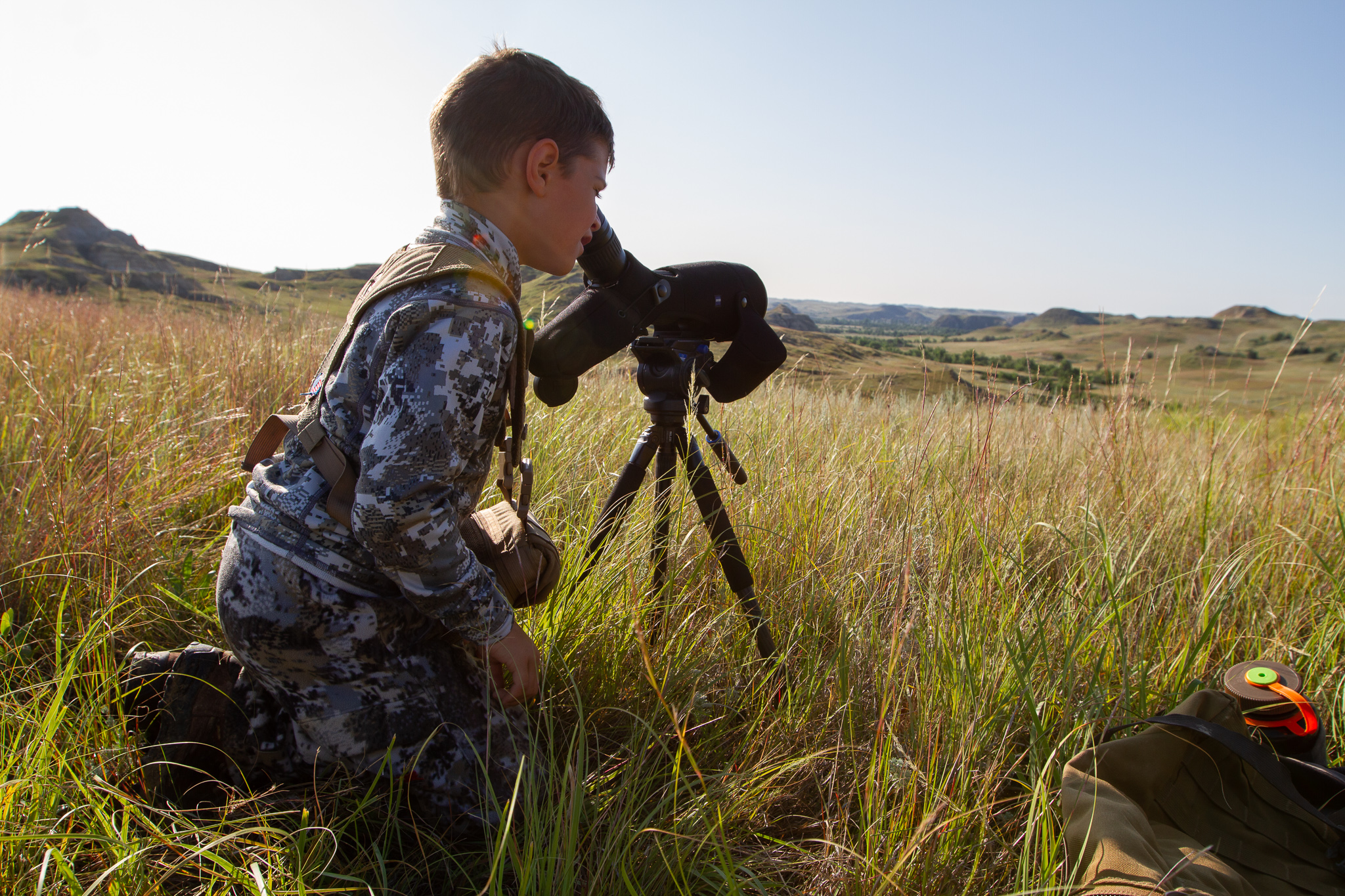 The following year, Minnesota opened up a statewide youth deer hunt.  The hunt ran for four consecutive days in the middle of October. As soon as Wyatt heard of this hunt, he had it in his head that he was going to hunt exclusively for a buck.  After four hard days of hunting, he finally connected with his first buck on the last evening. Sitting right next to him, it was incredible to watch the hunt unfold. I gave very little instruction and watched him execute everything that he learned up to this point perfectly.

Of all the emotions I dealt with that evening, relief and pride were the most intense. I was able to watch my son grow through his learning process, and  I could now focus on helping Easton get his first deer. I hope to continue the process with my youngest boy, Layne.

Every day I’m amazed at how fast these boys are growing up. I try my hardest to slow down time, but despite my efforts, it hasn’t worked.  I always knew I wanted kids, but I was never in a rush. Now, I can’t imagine a life without them, and I am thankful every day we had our boys when we did. I’m grateful for Wyatt and all the patience he’s shown me as I learn how to be a mentor and a father. Cheers to a lifetime in the woods together.

Luke is a hunter, angler, all-around outdoorsman and has been a GORE-TEX Hunting Technician for five years. He was born in California and grew up in MInnesota, but wasn’t introduced to hunting until later in life. After cutting his teeth on waterfowl in the Land of 10,000 Lakes, he’s started devoting more time to whitetails and big game over the last 15 years. He became interested in photography after high school and enjoys pressing shutter as much as he does pulling triggers. Every fall, he heads towards the Rockies to continue the pursuit of big game and waterfowl. He is a husband and father of three young boys, Wyatt, Easton, and Layne, and lives for the days when family time and time outdoors overlap.