When Alex Strickland planned to meet his girlfriend in Peru on the tail end of her summer-long medical research trip, he traveled with purpose, planning to ask her a question — the most important question, in fact. All that stood between him and his happily ever after was a calamity of errors he couldn't have foreseen.

I don't speak Spanish. I don't mean that in the modest way some people do when they really mean that they don't speak Spanish well. Once the conversation gets past baño and cerveza, I'm useless. And for eight days in Peru, that really hadn't mattered, but now I was sweating through my shirt as I tried to communicate with two Machu Picchu security guards holding my Nikon, which I'd set down on an ancient stone wall 45 minutes earlier and completely forgotten. It seems like an unbelievable oversight for someone to walk away from his camera, especially after waking up at 4 am to hike straight up a mountain in order to catch the sun rising over one of the most beautiful spots on earth. But I had an excuse. I'd stopped to fish an engagement ring out of my backpack and covertly move it to my pocket for a certain question I was planning to ask my girlfriend, Keriann, that afternoon. 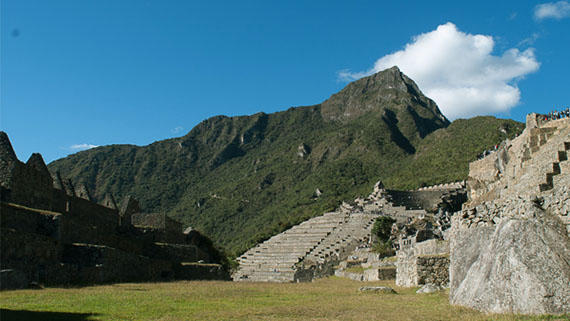 Eventually we thumbed back through the memory card far enough to find a selfie from that morning. I mugged the same goofy grin, the guards relented, I filled out a form, and then started running full-tilt back up the trail to the top of Machu Picchu Montaña where Keriann was waiting. I'd bought the ring 18 months earlier and had planned to use it much sooner. Then Keriann announced she was thinking about joining a medical research trip to Peru the following summer as part of her grad school experience. Living abroad during my undergraduate years remains one of the richest stretches of my life, so I couldn't protest. I also knew I'd need to keep that ring under wraps until South America. 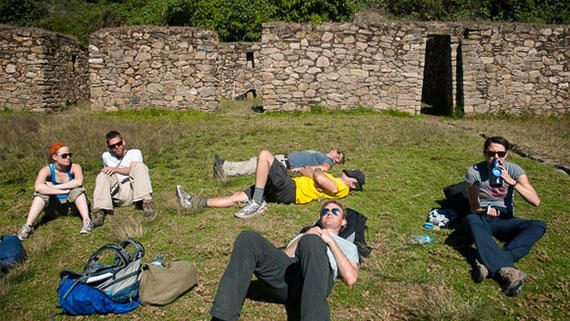 She'd been in Peru for six weeks when I arrived in Lima. I was travel-weary and lacking language skills. After landing in Lima, we quickly bolted for a short flight to Cuzco, where we then embarked on a five-day bike and walk to Machu Picchu. We opted for the route that was billed as an adventurous and less-traveled alternative to the classic Inca Trail. Still, we expected overweight, middle-aged tourists that we'd walk circles around. We were very wrong.Our dawn-to-dusk days of hiking trails — allegedly built by the ancient Incas, but more suitable for mountain goats — bled into nights spent feasting on local food and sleeping soundly. We were lulled by the rhythms of a completely unplugged lifestyle. My relaxation was so complete that not once but twice I absent-mindedly sent my backpack ahead with a porter to our next night's lodging, only remembering some distance down the trail that the ring was poorly concealed in an inside pocket. As happens on any big trip, there were moments of magic. Driving back to camp one night after a side-trip whitewater rafting the sacred Urubamba River, our group found nirvana — were content and completely at peace. We sleepily rocked along a jungle two-track in an old van as our guides scanned the radio. All of a sudden the steady bass drum of Mellencamp poured out of the blown speakers, and just like that, a bunch of North American twenty-somethings and a pair of Peruvian river rats were yelling "Life Goes On" into the night. The world had never felt smaller as we leaned up against each other amid the stink of damp life jackets, and I forgot all about the big question I was still trying to figure out exactly how to ask.

The world had never felt smaller as we leaned up against each other, and I forgot all about the big question I was still trying to figure out exactly how to ask."

The day before reaching Machu Picchu we agreed to our guides' proposal to change route in order to crest a ridge across from the famous ruins and get an early sneak peek. The sun was barely up by the time we realized it had been a mistake. We'd end up walking about 25 miles, including a river-to-river hurdle of an Andean ridge, and were feeling worse than ragged by the time we slouched into Aguas Calientes at the base of Machu Picchu.

As we walked toward the ruins in the next morning's inky pre-dawn, our little group decided we wouldn't try for permits to climb the popular Huayna Picchu just above the famous site, but instead would tackle the longer, higher trail to Machu Picchu Montaña, which we'd glimpsed the previous day towering high above. After a morning touring one of the new Seven Wonders of the World, we started up the trail, and I made up some excuse to lag behind for a few seconds. I set my camera down on an old wall while I rooted around in my pack for the ring, then walked away without the camera. 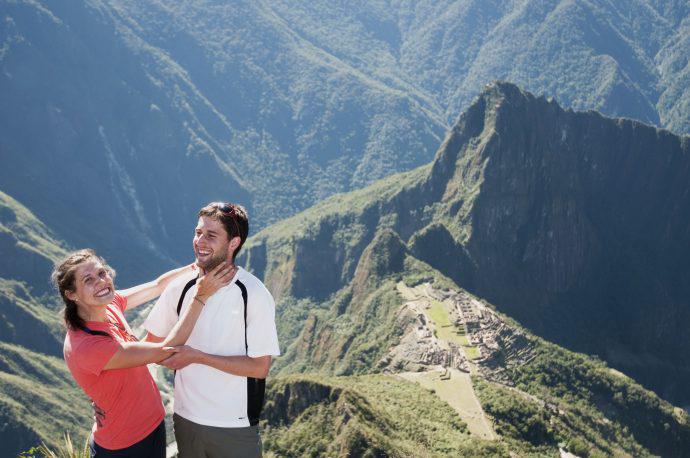 By the time I reached Keriann, she'd convinced our new friends not to wait up so I knew we'd have to hustle if I wanted witnesses—maybe even a picture. On weary legs we pushed hard up the steep trail and gained the summit just a few minutes after our group, who'd enjoyed a less punishing pace. The Andes were spread out around us and, surprisingly far below, Machu Picchu was nestled in a fold of green-clad mountains looking every bit like the royal retreat it was thought to be. Our group took turns posing for photos on the edge of the slope until finally the two of us were up. The barely recovered camera tells the rest of the story: Keriann mock-choked me as payback for the brutal march to the top, and in the next frame I dropped to one knee and produced the ring I had done my best to lose. She said yes—exhaustion may have clouded her judgment—and a year later we took another (mercifully shorter and flatter) hike down the aisle.