Pavement is a petty playground for a seasoned adventurer. Step inside the magic of Utah's stunning slot canyons where two friends traversed arches, adversity and a series of waves affectionately dubbed "Spooky" and "Peek-a-boo".

Utah's slot canyons are natural marvels that have been described as majestic, awe-inspiring, dangerous, and otherworldly. Formed over millions of years by water rushing through rock, exploring them is less hiking and more scrambling through nature's version of an adult-sized playground. Slot canyons have long beckoned adventurers, but special skills and equipment usually make visiting them a challenge. However, in the remote reaches of Utah's Grand Staircase-Escalante National Monument—26 miles down the unpaved Hole-In-The-Rock Road—lies a hidden pair of non-technical slot canyons. Called the “hike of a lifetime" by many, they're better known as Spooky and Peek-a-boo. My best friend, Rachael, and I planned this weekend as a ski trip, but warm winter temperatures and little snow made us reconsider. We instead exchanged our winter boots for hiking ones, and drove south to Escalante, a town Rachael had never seen and I'd visited just once many years earlier to hike this very slot. For me, it was more than a casual getaway. It was my first since a snowboarding accident five months earlier tore my wrist and damaged the nerves, leaving me in a wrist brace 24/7. A rare reaction to cortisone aggravated the injury, which meant the mere act of opening a jar was impossible until undergoing months of therapy. I've learned to beat my inherent inclinations for depression and anxiety with a steady dose of nature, recreation, and solitude, so the diagnosis left me with a case of cabin fever and sadness all winter. So now that I had my doctor's blessing to return to activity, and after months of missed expeditions, I was ready to test my wrist—and resolve—again. 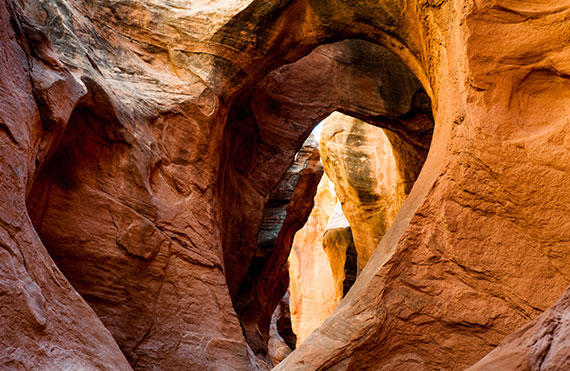 We could have day-tripped near home. But Rachael and I both wanted to step up our game. Backcountry camping and navigating the slots alone was a new level of accomplishment for our dynamic duo. We chose this pair of slots because they didn't require ropes (which we didn't have) or difficult climbing (which I couldn't do). To reach the start we drove to Dry Fork Overlook, situated 300 feet above the hidden canyons, and navigated steep switchbacks to reach the desert floor. The sun beat down as we searched for the elusive entrance until spotting a barely discernible crack in the high, red sandstone walls: Spooky. Once inside, the cliffs closed in fast, narrowing from a car-sized opening to barely shoulder width immediately. I typically hate closed spaces like these, but recalling that the route would eventually open into desert gave me the confidence to continue. Little sunlight entered and temperatures dropped as Spooky's skinny straight channel began to bend and wind aggressively. The canyon walls transitioned from smooth sandstone to knobby rock, signifying our entrance into the narrowest portion. Here we were forced to carry our backpacks and shuffle sideways through the compact crevices to fit. I toted mine with my good hand until reaching a daunting obstacle: chockstones stacked high blocking the entire trail. I don't remember this. Sure it's been a few years, but I should recall a Class 3 scramble. Only then do I realize our mistake. This is not the way I came before. We'd hiked half of the 3.5-mile loop through the two canyons in the wrong direction. We were left with two options: up or back out. We began climbing the chockstones. 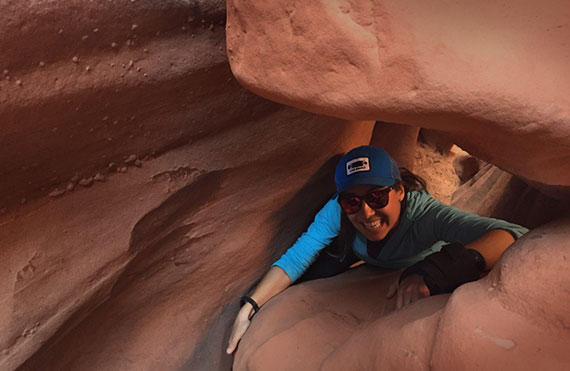 I worried about my wrist as Rachael went ahead first, laughing nervously as she awkwardly straddled the rocks and wriggled up, leaving me below to scramble on my own. Surmounting it looked challenging...especially one handed. Still wearing a cumbersome wrist brace, I reached for a natural hold in the rock with my good hand, but slipped. Without thinking, I caught myself with my injured one and winced as pain shot through my arm. Rachael offered a hand up, but since the whole purpose of coming here was to challenge myself, I knew I had to reach the top myself. I pressed my back into the sandstone, grasping the rock above with my good hand, and used my feet to push off the wall onto my stomach. I stood atop the rock I'd climbed and faced back down the canyon, surveying how far we'd come. Despite my now aching wrist, I didn't turn back. We hadn't driven five hours and hiked through the desert only to go halfway. I'm not a quitter. Just above the chockstones, Spooky ended abruptly, emptying into a desert landscape filled with orange sand and a few brilliantly pink, blooming desert flowers. It was eerily quiet here for how crowded this canyon can sometimes get, but it was the off-season after all.

We found Peek-a-boo next. Soon a parade of giggling children broke the silence. They were running down an easy section, ducking under small arches, their parents and smaller children appearing after them. I was a little jealous of the group's playfulness and that, between their small size and help from their parents, they could easily navigate the sections I struggled to maneuver through. Still, my confidence increased as we hiked down and through Peek-a-boo, which morphed into smooth, brilliant red, narrow waves. Here I learned to work with my injured hand instead of fighting against it, using my elbows, arms, and back to cautiously climb over and around the slot's obstacles, this time getting through the tough spots without incident. 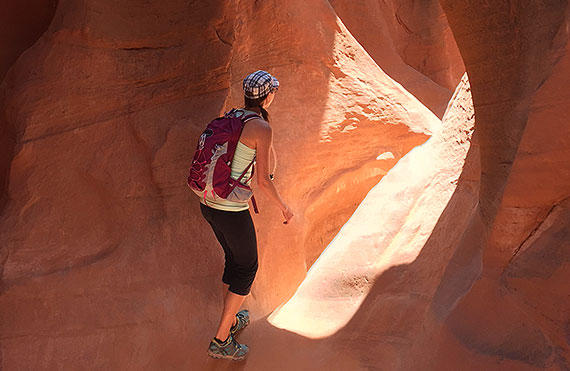 After navigating the waves, Peek-a-boo opened to reveal its famous feature: vibrantly-hued twin teardrop arches colored orange by the afternoon sun. Here we descended and ascended around potholes on the canyon floor, sidling along the ledges surrounding them when possible, to avoid one-armed pushing and pulling. Sometimes full of water, that day they were bone dry, so we thankfully didn't have to stem across. There's no way I could have borne my weight with an injured hand. As we approached the opening of the last arch, the family we'd seen earlier was gathered, staring down. When we caught up with them, I could see why they stopped. I peered over the edge and saw a 15-foot drop to the desert floor. "So...how do you get down from here?" I asked the mother and father. "Use the rock wall as a slide," the father said. "Just scoot down here and slide to the bottom...do you need help?" "On no, we're fine," Rachael said, not wanting to delay them. I agreed: we had this. The parents passed the kids down in a fireline, and just like a playground slide carved into the rock, I glided down last and fast, until safely back on sandy, solid ground. My wrist was still sore from slipping earlier, but I was elated to have finished safely. The canyon was tough, but it was my backpack, not my body, that bore the worst battle scars. Torn from pressing against the rough walls, it was a visual memory of overcoming adversity and getting back into action after months on the sidelines. For my first adventure back, the pain—and the mangled pack—was worth it. The only question remaining: where to next?