When it comes to mixing business with pleasure, Mark and Janelle Smiley walk a fine line between work and what is decidedly type-2 fun. 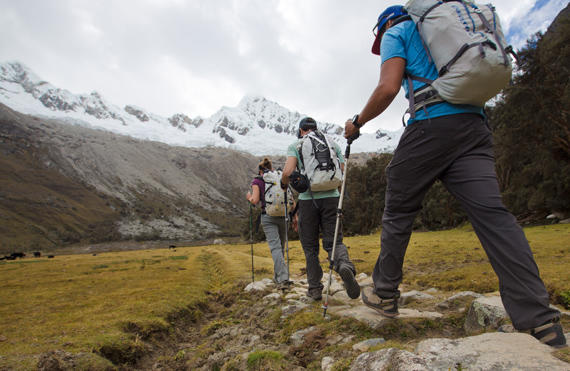 They’d flown halfway around the world from their home in Jackson, Wyoming to the high mountains of South America to guide clients in the Peruvian Andes. With that trip wrapped up, the mountaineering power couple decided to “take advantage of the thick blood” they’d already earned through acclimatization and tack a little side trip onto the end of their journey. But when Janelle, a world-class ski mountaineer and guide, found herself seriously ill at nearly 20,000 feet on the side of Mt. Huandoy, it was up to her husband Mark, an IFMGA mountain guide, to take care of both of them—doing the cooking and handling the chores of tent living, making Janelle as comfortable as possible and deciding their next move. "You're just trying to provide tender love and care," Mark says, "and it just takes a different kind of TLC in that environment." The Smileys, along with a third guide, Jed Porter, were hunkered down on a high ridge. Janelle was weak, barely able to keep food or water down. Mark knew that to get off the mountain, they'd have to ski down steep terrain dotted with very active seracs (columns of glacial ice). The exit would take at least 30 minutes to run, at top speed. Janelle might be a former North American Ski Mountaineering Champion, but Mark couldn't afford to risk her growing any weaker before they attempt the descent.

Janelle was weak, barely able to keep food or water down. Mark knew that to get off the mountain, they would need to ski down steep terrain dotted with very active seracs."

"We had to bail," Mark says. It was a tough pill to swallow, but Janelle rallied just enough to nab a first descent on Huandoy East, and then a final line down the popular Mt. Pisco. The typically hardy couple was hardly heading home with tails tucked.

The couple's Andean adventure might have been an off-the-charts test of marital harmony, even for this mountain-loving pair, but the trip amounted to a quiet vacation from their primary objective—a grueling, years-long challenge aptly named Committed Project. In a test of their mettle and marriage, the couple has spent the last six years attempting to be the first people to climb all 50 routes outlined in the iconic "Fifty Classic Climbs of North America," known in many mountaineering circles simply as "The Book."

To date, they've checked off 46, ranging from classic desert crags like Utah's Castleton Tower to massive peaks in the Canadian Rockies, including Mount Waddington and Mount Robson. The couple, who are sponsored by La Sportiva and the GORE-TEX® brand, manage to cram climbs in during the shoulder seasons, crossing the continent in a Sprinter van, so they can spend summers and winters in Jackson, Wyoming, guiding and training. 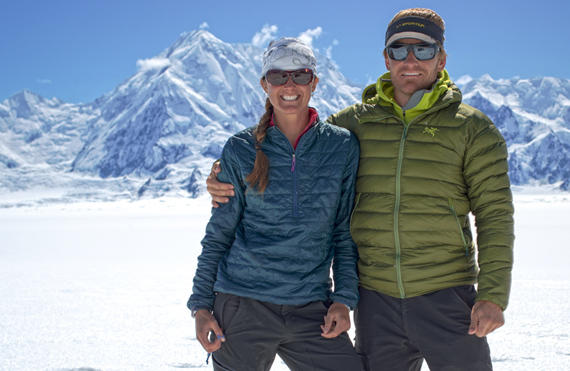 But their biggest challenges are still ahead of them. "We left several obscure ones for last," he says. "Abruzzi Ridge on Mt. St. Elias, the East Buttress on Middle Triple Peak in Alaska, and Hummingbird Ridge on Mt. Logan in the Yukon. They're arguably three of maybe the hardest five." In 2016, they hope to wrap up the nearly decade-long pursuit with a final climb up The Diamond on Colorado's Longs Peak because "it's close to home," says Mark. We can have friends meet us at the top—way better than topping on out some remote Alaskan peak and making a sat phone call." The challenge of the summits aside, the final three expeditions will put a particular strain on the duo, as they'll have to spend three months living on a glacier. It's "a lot of glacier time together," as Mark puts it. "I mean, I love glaciers, but I also like pizza and flushable toilets." 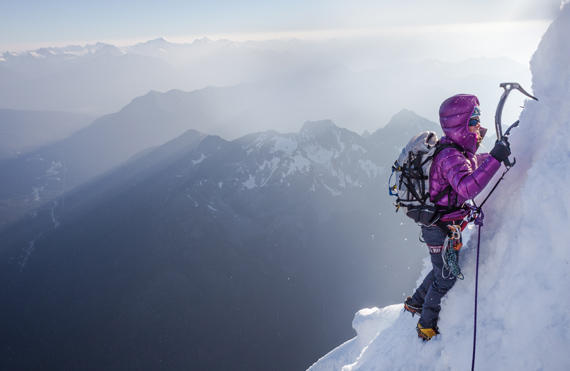 For a couple who got engaged 1,500 feet off the ground, who've endured vomiting dehydrated food on the side of a 20,000-foot peak, pizza and flushable toilets are rare, romantic luxuries. But Mark couldn't imagine doing what he does apart from Janelle. "Climbing and skiing to me are a lifelong passion," Mark said. "The number of climbing days any person has is a finite number, and you have to decide how you want to spend those days and who you want to spend them with." On the upside, he says, "climbing together means sharing some of the best parts of life with each other." Janelle agrees. "There is no place I would rather be than challenging myself in the mountains with Mark," said Janelle. "In sickness or in health."