Explore Support Pages
You've made it to the top of the run and your ski tips are dancing over the edge, waiting to glide down and over the fresh powder.

With your adrenaline surging, you dip forward, taking off as a large wing begins to lift up behind you. Filling with cool mountain air, it propels you up, off, and away from the snow. It's the sport of speed riding, a combination of big mountain skiing with a speed wing, similar to those used when paragliding but smaller, to carry you to a whole new level. To say this sport is young is an understatement. Speed riding only took off in the early 2000s in France, especially in and around Chamonix, a French commune that sits under the nearly 16,000-foot Mont Blanc. It is well-known for steep skiing and serious mountaineering. The adrenaline-inducing gist of the sport includes getting to new heights and summits either by hiking, ski lift, or helicopter with skis and a speed wing in tow. From there, it's a matter of launching off the edge of a snowy mountain to soar over the route, landing and making turns in untouched powder. 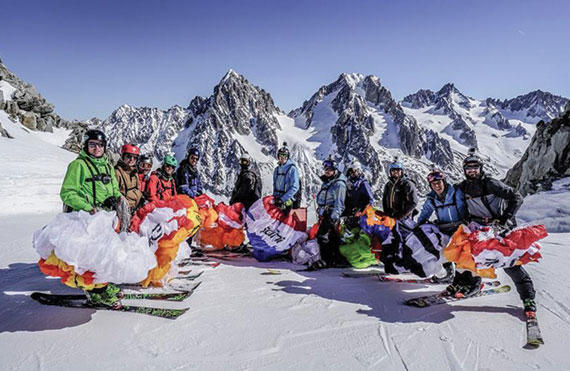 "Most people come into the sport from a paragliding or skydiving background," says Asher Zalchendler, co-founder of SkiAndFly, a speed riding school in Queenstown, New Zealand. Other sports that adapt well include skiing, kitesurfing, and even downhill mountain biking. "We promote the sport to skiers by telling them: 'Take your skiing to the next dimension.' And that's what it is for us. It opens up a whole new world for the off-piste and freeride skier." As Zalchendler assures, learning to speed ride doesn't have to be stressful or dangerous. By starting with small wings and an experienced instructor, beginner riders can learn to assess their skill level, attitude, and goals accurately so that the overall experience will be fun and safe. "We discuss the mental and physical preparation in our camps and cycle through all of our checks for speed riding to build awareness of yourself and the surroundings," says Zalchendler. "For example, we talk about how we are feeling before the first run, and then before the second. We talk about how that's changed. Complacency comes from thinking it will all be okay because it was last time. We want people to understand that the human factor is something that can be assessed the same as the weather." "No matter your level of speed riding, being able to read the conditions—those that may be internal, but also the weather—is key," says professional skier and BASE jumper JT Holmes. "You have to have proper instruction and the willingness to not go if the conditions are not right," Holmes says. "One needs the ability to assess a mountain in the simplest way. As in, 'is it okay to crash here?' or 'is it absolutely not okay under any circumstances to crash here?' If it's okay to crash, you can take a little bit of a bolder approach. If not, you have to be cautious but deliberate." In a sport that can have serious and fatal consequences, knowing when to step back and ride another day is important, as is knowing what to do in an emergency. Snafus can happen to even the most experienced riders, like Holmes, who's seen his fair share of injuries and deaths. While speed riding in Chamonix for the latest Warren Miller film, Chasing Shadows, Holmes's witnessed his partner's equipment malfunction in the air when a leg strap of his parachute came off. Luckily, he was able to land safely. Holmes continues to garner attention for speed riding. In November, 60 Minutes covered one of his most impressive speed riding routes to date, the western flank of 13,020-foot Eiger in the Swiss Alps. He'd skied off of it once before with parachutes in 2004. This time, Holmes began the run by speed riding down the famous mountain's treacherous face, then dropped his speed glider wing to launch off of a rocky cliff into a double back flip with his skis still on. Once in mid-air, he released both skis to free fall for nearly 2000 feet before deploying his parachute and landing safely on the valley floor nearly a mile below the summit. 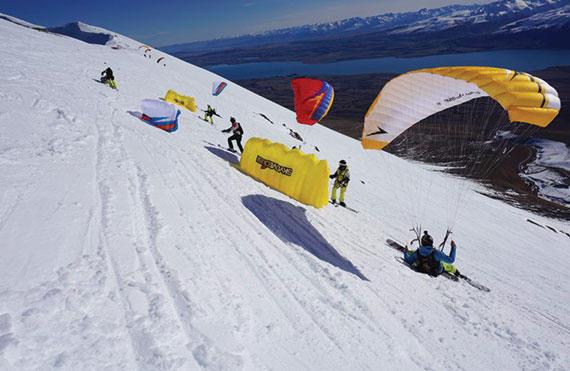 But he was not done just yet. "For three years, I tried to pull off the Eiger run," Holmes says. "Finally, the playground was set. Winds were still good. The skier in me just wanted to go make another run." But on this second attempt, after speed riding the initial descent, Holmes ran into trouble when it came to the free fall. After take off, one of his skis failed to release, a dangerous malfunction that can have potentially fatal consequences. If skis are still on, the parachute could get caught in them, and wouldn't be able to deploy properly. In 2009, Shane McConkey died after a similar accident in the Italian Dolomites. Holmes was there and witnessed the terrible incident, but he continues forward in his sports and doesn't let fear get in the way. "Honestly, it's just good clean fun," Holmes says about what pushes him in his adventurous and often dangerous pursuits. "I am not driven to take risks. I am driven to have maximum fun and achieve maximum enjoyment out of life. The risks, unfortunately, do exist, but they detract from the allure of an objective, they are not the attraction." On the Eiger, Holmes was prepared for a manual release of his skis if the cutaway handle didn't work properly. He had practiced this many times in various conditions on and off the hill, knowing that he could get that release to work in just about any position or condition he encountered. As Holmes was free falling through the air with one ski still on, his mind and body were fully prepared for Plan B. Quickly, Holmes was able to reach down and get the ski off again to land safely on his second jump. While Holmes might push this sport to its extremes, it can still be accessible for amateur skiers and flyers, alike. Although intermediate skiing skills are recommended, Zalchendler has taught speed riding to skiers who have had no flying background whatsoever.

"Different wing sizes to choose from, access to the right terrain, and guidance from an experienced instructor can all make the sport safer," says Zalchendler, who believes that it's one of the few action air sports that can be tailored to fit any skill level. For beginners, wings are adjusted so that there is no chance of taking off from the ground and the skier will comfortably be able to ski with the wing above their head. At SkiAndFly's entry-level camps, riders begin with 650- to 900-foot runs with wings attached but staying on the ground. Riders work their way to confidently demonstrating wing control through turns on the ground, and eventually fly with small take offs, about 15- to 20-feet in the air for about 40- to 80-feet. Practicing on the ground with wings may seem like a small place to start, but progressing to a higher level of speed riding is worth it as you learn to soar above and beyond the slopes. "Speed riding adds a whole new dimension to skiing and lends itself to a really awesome experience," says Holmes. "I enjoy skiing, and I enjoy flying—I enjoy the creativity involved with furthering the way we do each of these activities. " So take a cue from Holmes and Zalchendler to push yourself to your own limits, be that skiing, flying, or of course, both.