To his sister, Jimmy Chin once explained that tackling the summit of Everest was not entirely unlike walking across the state of Iowa.

“It's just kind of long and torturous, and there's a lot of suffering," Grace Hartman, 47, said her younger brother told her, “but, you know, anybody can do it." 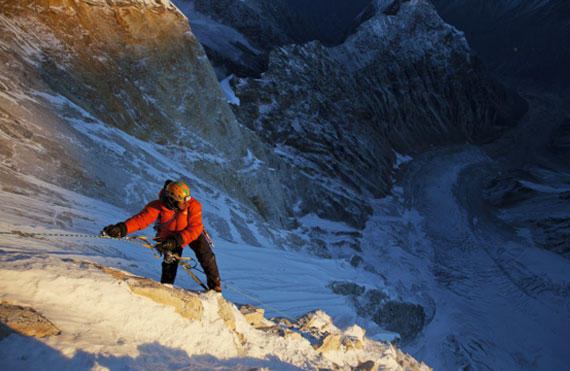 Her brother — one of the world's most accomplished climbers — downplays everything, she explained, including the intense drive that's helped him up Everest twice, even skiing back down in 2006. So when Chin, 41, nonchalantly told his sister back in 2008 that he was heading off to remotest India to climb the Shark's Fin on Mt. Meru—a nearly 21,000-foot peak in the Garhwal Himalayas that's beaten dozens of expert climbers over the past several decades—she didn't quite grasp the enormity of what he was taking on. When he returned home, emaciated, in a wheelchair, having come up just 100 meters short of the summit, she realized what a big deal his journey had been. “So of course, the second time around," Hartman said, “I was a lot more worried." But Chin, an athlete sponsored by The North Face®, is nothing if not determined, even borderline obsessive. And so, despite declaring after attempt number one that some peaks are simply not be meant to be climbed, and despite enormous personal challenges that might have deterred others from a second effort, in 2011 Chin and his teammates, Conrad Anker and Renan Ozturk (also sponsored by The North Face®) scaled the un-scalable. A film about the climb that Chin directed with his wife, Elizabeth Chai Vasarhelyi, came out in theaters this past August. The Sundance Film Festival audience award winner is aptly titled "Meru."

“It's not the first time I did something that looked completely impossible," Chin said over the phone one early fall day from New York City. He lives there when he's not at his home in Jackson Hole, Wyoming, or traveling the world as a professional photographer, skier, climber and mountaineer. “You learn to give what seems impossible a chance," he said. Chin has a history of embracing the impossible—his one-day ascent of the nose of El Cap in 1997 was just one of many other notable successes (and near misses) over the years.

You learn to give what seems impossible a chance."

The climb up the Shark's Fin itself is among the most difficult in the world. It requires expertise in rock climbing, ice climbing, big-wall climbing and winter camping in a portaledge (or hanging tent), all at dizzying altitudes and in extreme cold. More importantly, it requires the willingness to suffer and the ability to push beyond it. “You kind of have to have the full bag of tricks," said Chris Figenshau, a friend of Chin's who is also a professional photographer and climbing guide from Jackson Hole. He managed the team's base camp at about 14,500 feet during their 2011 climb. 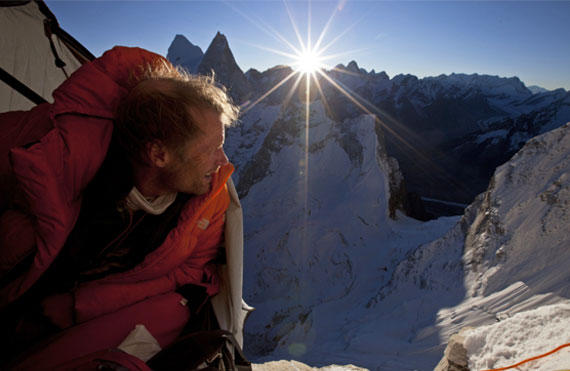 Of course, as Figenshau points out, they didn't just climb Meru—they documented the entire experience as well. Chin and Ozturk, the cinematographers for the film, shot still and motion imagery throughout their two ascents. "It's hard to turn a camera on when it's really cold and you're uncomfortable and you're on the side of a huge mountain face with everything on the line," Figenshau said. “So I think that's something to consider when you're talking about how hard the climb is." Tackling the route was Anker's idea originally and one of his life's ambitions. The North Face® Athlete Team captain, and long-time friend and mentor to Chin, had tried once before in 2003 without success. When he returned in 2008 with Chin and Ozturk the three men planned for one week climbing the wall. By day two, severe weather rolled in, and they were battered by storms. They ended up spending 19 excruciating days on the route, their food supplies dwindling rapidly, and turned around just shy of their goal. At the time, Chin said he wasn't going back. 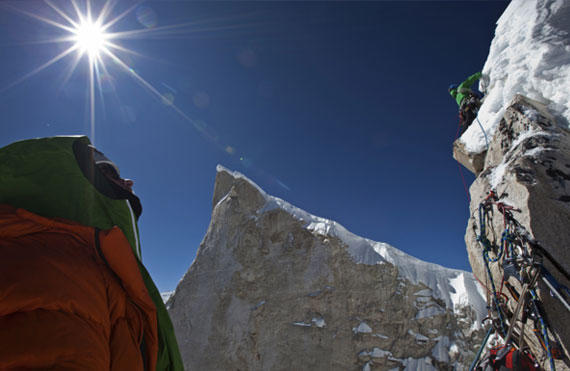 To Hartman, who also appears in the film, the takeaways from 2008 were twofold. “That you can have such intense passion, but you know better than to push yourself to the limit where it kills you," she said. “It was good to know that my brother could dedicate two years to something, preparing, and then still make the smart decision to turn back." For his part, Chin said he's “hardwired" in such a way that it's difficult for him to leave unfinished business, well, unfinished. “The memories dull a bit," he said of the hard parts, the suffering. “You start to remember the good things...Somewhere in your mind you've always been thinking about how to do it, and how to do it better." But before the trio could get back to the kind of sheer granite and ice that make an extreme climber's dreams, disaster struck—twice. While on a shoot in the Jackson Hole backcountry with Chin in March 2011, Ozturk took a nearly catastrophic ski fall over a cliff, fracturing his skull and two neck vertebrae and rupturing a vertebral artery. It's the kind of trauma many don't survive. Then, just days later, Chin returned to the shoot and was caught in a massive avalanche that carried him 2,000 feet. Miraculously, he lived, too. But Chin was shaken. He took some time off and took stock. But, where others may have given up for more pedestrian diversions, Chin decided that skiing and climbing were just two things he couldn't leave behind. Six months later, Chin (still a little shaken), Ozturk (still recovering from his grievous injury) and Anker (weighted down with concern for his teammates) were back in India with the Shark's Fin in their sights again. "Conventional wisdom would say going back was probably not a great idea," Chin said. “I don't know if it makes sense rationally, but it was a way to get back on the horse. It gave us a focal point, an objective, which is really helpful in that situation." The hike in took three days. The trio hauled about 200 lbs of food and gear, and this time the weather behaved. On October 2, 11 days after they began their second attempt, Chin, Anker and Ozturk bagged the elusive peak. Even using his largest camera lens from their advanced base camp, it was hard for Figenshau to see the men as they climbed. But when Chin popped up on the sheer summit ledge, backlit by the sun, sky all around, and arms thrust above him, howling in victory, Figenshau knew. For Chin, among the hardest elements of the climb was keeping his head in the game.

“The most challenging part is just sustaining that level of focus and motivation for that long. Because it's so hard every single day," he said. “And you know at any given moment you could just turn around. There are always a thousand reasons to turn around. Always. Maintaining that motivation is tough."

"There are always a thousand reasons to turn around. Always. Maintaining that motivation is tough."

Ultimately their experience was filled with messages that resonate universally for experts and amateurs alike: the growth that comes from striking out well beyond your comfort zone; the value of perseverance; and the critical importance of mentoring and learning from others.

Still, for Chin, of all the lessons that the Shark's Fin imparted, the most significant lesson is about people. “When we decided to go back with Renan, we chose friendships over the potential success of the climb," he said. “You start to learn that friendships are really what's important. And loyalty."