Out of the train window, an easy rain spat like flies' wings that smacked the flooded rice fields. 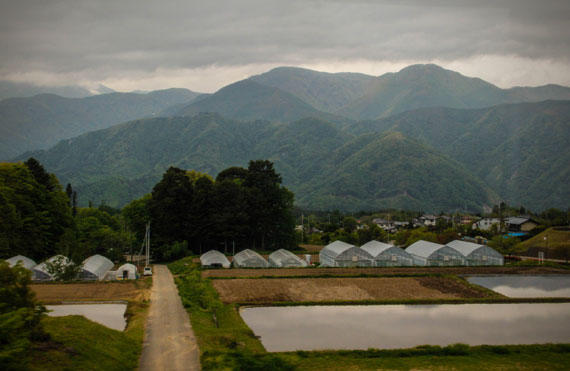 Everywhere we looked, the lush ground was covered in a vivid green hue. An ominous shadow hung over the mountains, the country soggy and alive. This gothic weather, I'm sure of it now, was the culprit. It mesmerized us as we quietly rode past the dreary flanks of Mt. Fuji where we sought a strange kind of adventure in a haunted wood called Aokigahara Jukai, the Sea of Trees. It was a name we could neither fathom nor resist. Others, mostly outside of Japan, sometimes know it by its more macabre epithet: Suicide Forest.

Even the sign at the entrance all but pleads with people to turn back. Though clear trails exist, the dense snarl off-trail is disorienting, and some insist compasses don't work."

An hour and a half west of Tokyo, the Sea of Trees floats beneath Mt. Fuji's lava skirts, a dark and tangled forest into which hundreds of Japanese citizens have ventured and, presumably by choice, never returned. Local mythology associates these woods with demons, but perhaps only the personal kind reign there. Even the sign at the entrance all but pleads with people to turn back. Though clear trails exist, the dense snarl off-trail is disorienting, and some insist compasses don't work. Intrigued, my partner Paige and I hoped to hike into it and explore for ourselves.

Then the typhoon hit. Distracted, we got on the wrong train, a fact we didn't notice until we reached a town called Chino, 65 miles to the northwest. We backtracked and wandered the empty streets of Enzan, a tiny mountain village drowning in the rain, until our next train came. One man, despite the storm, stood atop a ladder tending to his grape trellises. Paige took quaint photos. The day was waning, the rain waxing.

By the time we crept along on the Fujikyu train, the sky grumbled around Mt. Fuji, now wreathed in cloud. At Kawaguchiko Station, the end of the line, one more transfer would get us to the forest for a disconcertingly tardy venture inward. But some kind of luck — good or bad we'll never know — meant our bus had stopped running. We'd spent hours reaching a dead end.

Still, Kawaguchiko lay at our feet, and across town brooded mountains, another forest, waiting for exploration. We zipped our rain jackets, raised our hoods, and tramped through town. After passing drenched gardens, old Japanese homes, and a broken-down, rusted van in the grass, we climbed up a road tucked deep in the hills. 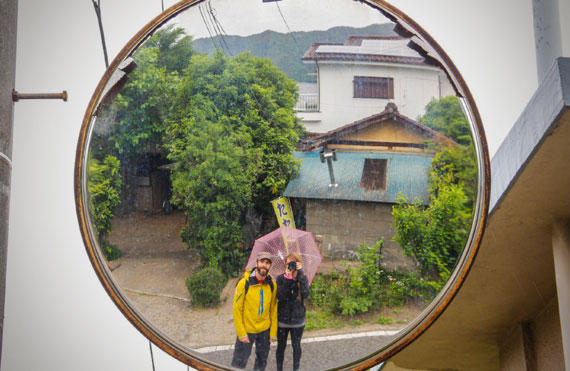 A dirt path veered from the road into the trees, climbing higher. It wasn't wild, but it was green and beautiful in its way. The path led to a cage with a dangling carrot and trap door, big enough for a hungry black bear. The mechanism didn't budge. We figured the critters were safe and headed back to town.

Now we were thoroughly soaked—all but the shirt under my GORE-TEX jacket—the kind of wet you get jumping into a river. With no way to make it worse and our Tokyo-bound train an hour off, we stomped through the little puddled streets past homes that might have grown out of the earth, watered by these torrents.

Maybe the typhoon saved us. That's what I keep thinking. Had the sea-rain not entranced us, the Sea of Trees might have swept us into its peculiar tides. But those ghosts don't trouble us. And we're not lost to haunt the living. Aokigahara abides another day. That's the wonder we still reside in.